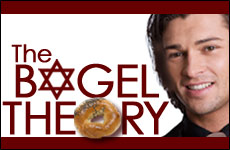 Jews have a powerful need to connect with one another.

This time of year can be challenging for Jews. After the joy of Chanukah subsides, we find ourselves adrift in the Red and Green sea. Our halls are markedly undecked while most of the world is encrusted in boughs of holly. The glare of tinsel and little multi-colored lights blind us at every turn. We dread the awkward pause after someone wishes us something merry and know the discomfort of holiday parties for a holiday that we don't celebrate.

What can be done to combat the isolation? How can we satisfy a hunger for Jewish connection?

It all started when my friend Doodie Miller-- who wears a kippah – was back in college and suffering through a tedious lecture. As the professor droned on, a previously-unknown young woman leaned over and whispered in his ear:

"This class is as boring as my Zayde's seder."

You see, the woman knew that she did not "look" Jewish, nor did she wear any identifying signs like a Star of David. So foregoing the awkward declaration, "I'm Jewish," the girl devised a more nuanced – and frankly, cuter – way of heralding her heritage.

This incident launched a hypothesis which would henceforth be known as the Bagel Theory.

Jews, regardless of observance or affiliation, have a powerful need to connect with one another.

The Bagel Theory stands for the principle that we Jews, regardless of how observant or affiliated we are, have a powerful need to connect with one another. To that end, we find ways to "bagel" each other – basically, to "out" ourselves to fellow Jews.

There are two ways to bagel. The brave or simply unimaginative will tell you straight out that they are Jewish (a plain bagel). But the more creative will concoct subtler and even sublime ways to let you know that they, too, are in the know. (These bagels are often the best; like their doughy counterparts, cultural bagels are more flavorful when there is more to chew on.)

I suspect that Jews have been bageling even before real bagels were invented. And while my husband and I may not have invented bageling, we do seem to have a steady diet of bagel encounters.

An early bagel favorite occurred when my kippah-wearing husband and I were dating, and we spent a Saturday evening at a funky coffee house with friends. We engaged in a few boisterous rounds of Boggle, the game where you must quickly make words out of jumbled lettered cubes. Observing our fun, a couple of college students at a nearby table asked if they could play too. After we rattled the tray and furiously scribbled our words, it was time to read our lists aloud. One of the students, who sported a rasta hat and goatee, proudly listed the word "yad." Unsuspecting, we inquired, "What's a yad?" He said with a smirk, "You know, that pointer you read the Torah with." Yes, we were bageled at Boggle.

On our honeymoon in Rome, we were standing at the top of the Spanish steps next to a middle-aged couple holding a map. The husband piped up in an obvious voice, "I wonder where the synagogue is." My husband and I exchanged a knowing look at this classic Roman bagel and proceeded to strike up a conversation with this lovely couple from Chicago. After we took them to the synagogue, they asked to join us at the kosher pizza shop. As we savored the cheeseless arugula and shaved beef pizza – to this day the best pizza I have ever had – this non-religious couple marveled at traveling kosher and declared they would do so in the future. A satisfying bagel to be sure.

In the years since, our bagel encounters have become precious souvenirs, yiddishe knick-knacks from our family adventures in smaller Jewish communities. Like the time the little boy at the Coffee Bean in Pasadena, California, walked up to my husband, pulled out a mezuzah from around his neck, smiled and ran away. (A non-verbal bagel!) Or our day trip to the pier in San Clemente, California when an impish girl in cornrows and bikini scampered over to say "Good Shabbos."

We have been bageled waiting at airline ticket counters, in elevators, at the supermarket checkout. And I myself have been known to bagel when the situation calls for it, like the time I asked the chassid seated a few rows up on an airplane if I could borrow a siddur.

On a recent trip abroad, however, we did not get bageled even once. That was in Israel where, thankfully, there is just no need.

We bagel in a quest to feel whole.

Ultimately, why do we feel this need to bagel? Does it stem from our shared patriarchs, our pedigree of discrimination and isolation, a common love of latkes or just the human predisposition to be cliquey? I maintain it is something more. Our sages say that all Jews were originally one interconnected soul which stood in unison at Mount Sinai to receive the Torah. Now scattered across the Earth, as we encounter each other's Jewish souls, we recognize and reconnect with a piece of our divine selves. The bagel may have a hole, but we bagel in a quest to feel whole.

So the next time a sweaty stranger at the gym says to you, "I haven't been this thirsty since Yom Kippur," smile. You've just been bageled – adding another link in the Jewish circle of connection.

Share your own bagel story in the comments section below.

Jessica Levine Kupferberg was born and raised in Los Angeles. She has a BA in English from UCLA and a law degree from the USC. A recovering lawyer, she is now a full-time wife and mother and a founder of SCY High, the Southern California Yeshiva High School, located in La Jolla, California, where she resides with her husband and children.

The Secret to Effective Jewish Outreach

Anti-Semitism on Campus
It Takes A Lot Of Faith To Be An Atheist
How Instagram Brought Back This Nostalgic Soup
What Makes Eli Run?
Comments
MOST POPULAR IN Israel
Our privacy policy