Remodeling our kitchen provided an extreme makeover – in an unexpected way.

As our family grew in size, it became increasingly clear that our tiny kitchen was woefully inadequate. We needed some type of expansion, to allow for more than two people to sit comfortably, and to create cabinet space for the torrent of groceries that feeds our growing family.

Thus began the arduous process of seeking a solution. We browsed home improvement magazines, spoke with interior designers, and visited the kitchens of neighbors up and down the street, all the while compiling a composite picture of our “dream kitchen.”

Our plan was to build an extension onto the house, expanding outward into the backyard, to more than double the size of our existing kitchen. This would require architectural plans, a permit from the municipality, and a lot of time, money and effort.

No problem, we figured. We had a vision and were driven to fulfill it.

Then I had an idea. As long as we were building an extension, we might as well build a second floor, too. We could then add a master bedroom, an idea we saw executed so flawlessly at one of our neighbors.

The contractor’s estimate continued to rise, yet we were not deterred.

With every new twist to our dream, the contractor’s estimate rose, yet we were not deterred. We obtained the necessary permits and set a date for construction.

Then, in our final meeting with the contractor, he mentioned that the overall price would rise nearly 20 percent, due to a new tax law that had recently gone into effect.

We were crushed. We had already pushed our budget beyond the limit, and now the whole enterprise seemed impossible.

“The Almighty wants us to reassess all this,” my wife humbly declared.

That’s when the serious soul-searching began. “Should we go in, or out?”

The wise words of King Solomon came immediately to mind: “No person dies with half his appetites satisfied." In terms of our situation, Solomon was saying that someone with a house of 1,000 square feet wants 3,000. But once you get 3,000 you’ll want 10,000. And so on, endlessly.

Solomon was not suggesting that we squelch the desire to move forward in life. Nor was he consigning us to a difficult situation where the kitchen was a constant struggle of finding places to store things and carving out a spot to eat without getting jostled.

But somewhere a line has to be drawn where enough is enough. Solomon’s advice: Make an objective determination of your genuine needs, versus what goes beyond those needs into the realm of luxury. In the great struggle to balance our physical and spiritual needs, every investment in one side invariably is a trade-off at the expense of the other.

Leo Tolstoy’s story, "How Much Land Does a Man Need?" tells of a man named Pakhom. He is a farmer, who lives a happy life. Then one day a passing stranger tells him of a place where land is cheap and plentiful.

Pakhom travels to this place, where he is met by a tribal chief whose land holdings are vast indeed. Together they make a deal: Pakhom will pay $10,000, and whatever area of land he can walk around – in the course of one day from sunrise to sunset – will be his.

The next day Pakhom awakes at the crack of dawn. He eats a good breakfast and arrives precisely at sunrise at the designated starting point – a hilltop – to stake his claim. The chief warns him: “If you don’t return to this hilltop by sunset, you get nothing.”

Pakhom starts out heading northward, covering ground in good time. In the distance he spots a lush, fertile valley, and sets that as a goal. Within a few hours he had covered 10 miles!

Pakhom looks back, barely able to see the hill where he began.

The sun was getting higher in the sky and one-quarter of the day was gone. But Pakhom saw more good land ahead. It's too early to turn around yet, he thought. I can always pick up the pace later.

On and on he went – a small lake, an orange grove, a lush forest. The more he walked, the more he could acquire. The day became hot. The sun was already overhead. Half the day was gone. Pakhom knows he must turn left, to cover another leg of the square. Pakhom is hot, tired and thirsty – but for this one day, he is determined to push on.

Before he knows, it is late afternoon. Pakhom has not yet turned back in the direction of the hill. He begins to panic. Even if I wind up with a lopsided plot of land, I must go straight back to arrive on time!

Pakhom's legs feel like lead weights, and the sun is sinking.

Pakhom pushes forward, but his legs are cramping, his arms feel like lead weights – and the sun is sinking.

Fear shortens his breath even more. As Pakhom runs, his shirt and trousers cling to his body with sweat. A hammer beats in his heart, and his legs are collapsing beneath him.

Pakhom can see the people on the hill, yelling at him to hurry up. Pakhom presses forward with his remaining strength, but the sun – large, red and bloody – will be setting in mere minutes.

Pakhom’s legs can barely move fast enough to keep him from falling. Just as he reaches the base of the hill, the last drop of sun slips behind the horizon.

Yet the people continue to wave, urging him on. From their vantage-point on top of the hill, the sun has not yet set!

Pakhom pushes his broken body up the hill, panting and coughing, in a state of near-hallucination. The people cheer him on. With his very last ounce of strength, Pakhom reaches the top of the hill – where he promptly collapses and dies.

At which point the people dig a grave for Pakhom, and bury him there. As Tolstoy concludes: “Six feet from head to toe – that's all the land a man needs."

The end of the story with our kitchen: After we’d gotten the news about the 20 percent price increase – and asking a thousand times the question: “In or out?” – we decided to backtrack and forget the whole thing. I did some serious introspection, and reached an objective assessment: We could find other solutions without getting involved in an expansion project.

I was ready to toss away the architect’s plans, when I got an incredible offer.

I was resigned to toss the architect’s expansion plans into the trash, when the phone rang. It was an old, dear friend, who had done well in business and always shared generously. He heard the tension in my voice.

I explained our dilemma with the kitchen. Without hesitating, he said: “What if I loan you the money you need to make up the difference. And you can pay me back in 10 years?”

What incredible timing! Who would possibly say no to such an offer!

I told him I’d have to think about it.

Wouldn’t this extra space be wonderful? Yes! But hadn’t I objectively determined there were other, more modest solutions? But here was (almost) free money! And wasn’t the timing of this offer a sure sign that it was “meant to be”?

Or perhaps it was only a test, to see if I would hold the line against creeping materialism.

I thought of a graphic I’d seen posted on Facebook: 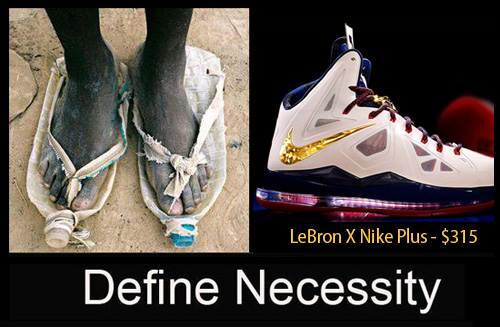 And I thought of how, in Genesis 33:9, Jacob and his brother Esav reunite after 20 years. In catching up with each other, they each describe their material status. Esav says, “I have a lot.” Jacob says, “I have everything.”

Notice the difference in outlook. Esav indicates that yes, he has “a lot,” but he wants more.

Jacob, by contrast, has all that he needs.

I called my friend back, thanked him for the generous offer, and politely declined. We didn’t really need this expansion. In terms of necessity, we already had it all.

When Monsters Lurk in Every Shadow
Would You Rather Be Right or Happy?
Korach’s Unique Punishment
Who Was Josephus? The Controversial Backstory of the Famed Historian
Comments
MOST POPULAR IN Current Issues
Our privacy policy