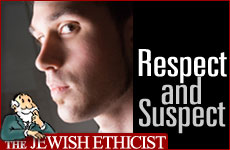 Drawing the line between prudence and paranoia.

Q. I understand business should be based on a relationship of trust. But I hear so many stories of people being cheated. Where do we draw the line between prudence and paranoia?

A. Certainly the Torah educates us to create a society of honesty and mutual trust. We are on the one hand commanded to act with integrity towards others: "Distance yourself from any falsehood" (Exodus 23:7); "You shall have righteous scales, righteous weights, and righteous measures" (Leviticus 19:36), and so on. But we also have various commands meant to reinforce trust towards others: "Judge your fellow righteously" (Leviticus 19:15), which our Sages interpreted to mean, give others the benefit of the doubt. (1) ; "Don't act vengefully and don't bear a grudge" (Leviticus 19:18) and others.

Our Sages went so far as to say, "Anyone who casts suspicion on the upright is stricken." This is learned from the story of Moses, who was commanded by God to free the people of Israel from slavery. Moses was concerned that the people would not listen to him, and protested, "They won't believe me". God replied, "Put your hand into your garment." The hand then came out stricken, which in Biblical times was considered a punishment for slander. (Exodus 4:1, 6-7.) Although this miraculous "punishment" lasted only a few moments, Moses was reminded that he should have faith in others. (2)

However, this does not mean we should naively rely on others to keep their commitments. On the contrary, the rabbis of the Talmud insisted that we should never rely on someone's honesty alone when we have the ability to properly document and enforce a transaction: "Anyone who has money and lends them without witnesses, transgresses 'Don't place an obstacle before the blind'. Reish Lakish said, he brings a curse upon himself." The "obstacle before the blind" is that the borrower will be tempted to deny the loan, thus engaging in a transgression. The Talmud then goes on to tell that the great sage Ravina refused to lend money for a mitzvah to his friend, the equally eminent sage Rav Ashi, without having witnesses and drawing up a proper contract. (3)

A common Hebrew expression is "Respect them and suspect them". We should always act in a respectful way towards others, but that doesn't obligate us to trust them with our property. The source of this is in a story of the Talmudic sage Rabbi Yehoshua. A complete stranger asked to stay the night. Rabbi Yehoshua obliged him by giving him a room in the attic, but also exercised prudence by removing the ladder so that the guest wouldn't be able to sneak out. The guest turned out in fact to be a thief; he wrapped all the valuables in the top floor in a cloak and tried to sneak out, but fell in the dark because of the missing ladder, and was caught red-handed.

One of the most common reasons people end up in litigation in rabbinical court is that they make "friendly" informal agreements, leading to endless misunderstandings.

Our sages summarized: "Other people should always be like thieves in your eyes, yet respect them as if they were Rabban Gamliel" (an especially honored and dignified Torah leader). Of course that doesn't mean we should treat every guest this way, and the passage explains that a person who has a good reputation should be trusted more. But it shows how we can simultaneously respect and suspect someone, by helping them to the best of our ability but taking reasonable safeguards against harm. (4)

A few years ago, the eminent scholar and Rabbinical court judge Rabbi Zalman Nechemia Goldberg gave an interview in which he stated that one of the most common reasons people end up in litigation in rabbinical court is that they make "friendly" informal agreements, leading to endless misunderstandings. This shows the wisdom of the Talmud's admonition that the failure to record transactions leads ultimately to mischief.

Of course there is always a gray area of ill-defined obligations, but trust is augmented when as little as possible is open to interpretation and misunderstanding. This is the secret of an ancient and seemingly bizarre Jewish custom. At any Jewish wedding, a guest is honored with reading the ketuba, or marriage contract, which clearly defines the legal obligation of the husband to the wife, including a divorce settlement. A marriage is the ultimate relationship based on trust; why should be launching it with a dry enumeration of legal obligations? The answer is that trust thrives when there is a clear and mutual understanding of obligations. Once this foundation is achieved, the sides can be flexible and understanding, but there is a need for an underlying bedrock of agreed-upon commitments.

The Jewish Ethicist: Oldies are Goodies
What Makes Eli Run?
The Tyranny of Materialism
Science Enters the Mysterious Inner World of Consciousness
Comments
MOST POPULAR IN Current Issues
Our privacy policy