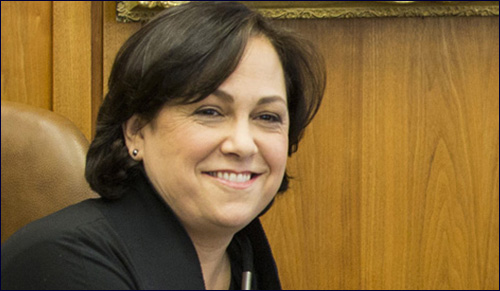 After 25 years of practicing law and raising two daughters, Vivian Bercovici (pronounced Berkovich) was living comfortably in Toronto, Canada, serving as adjunct law professor at University of Toronto and writing pro-Israel op-eds for the Toronto Star.

So Vivian never expected the call inviting her to become the next Canadian Ambassador to Israel. The government of Prime Minster Stephen Harper – deep and loyal supporters of Israel – was, Vivian says, "looking for someone who would well-represent their policies and their views."

When the shock wore off, Vivian realized, "For me this is perfect. My Cinderella moment." 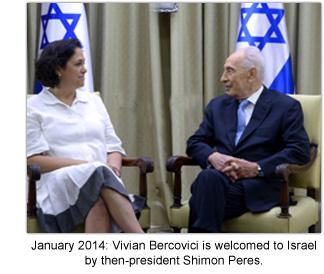 Yet for her family, it remained a big decision. "I'm a very involved, hands-on mom to my two daughters," Bercovici told Aish.com from her office at the Canadian Embassy in Tel Aviv. "They've lived in a familiar house and neighborhood in a little corner of Toronto. My younger daughter was about to begin her senior year of high school, so she was concerned about the adjustment and about leaving her friends."

In the end, "It was clear to everyone, my kids included, that Mummy had to do this."

So began a 4-year term that commenced in January 2014.

In the early 1980s, Vivian spent a year studying at Hebrew University in Jerusalem. The experience reinforced a deep pride and passion for Israel.

She penned numerous pieces for the Toronto Star – speaking out strongly against moves to sell Israel short internationally ("Iran Nuclear Deal: West Appeasing the Aggressor"), and noting that the Palestinian Authority “and just about every government in the Middle East make no secret of their collective ideological commitment to the total destruction of the state of Israel, which they regard as a blasphemous blight on the Arab and Muslim worlds.”

During the second Palestinian Intifada, her article, "Making Terrorists Pay," appeared on Aish.com.

Bercovici's appointment as Ambassador to Israel generated some flak.

Bercovici's appointment as Ambassador to Israel generated some flak. One critic said that her writings "qualify her more as Benjamin Netanyahu's envoy to Ottawa, rather than as Ottawa's envoy to Tel Aviv." Canadian Foreign Affairs Minister John Baird, the one who hand-selected Bercovici, was asked by a prominent CBC anchor: “Vivian Bercovici is Jewish, so there are going to be some questions. Why not appoint someone who doesn’t even have the perception of any kind of bias?" 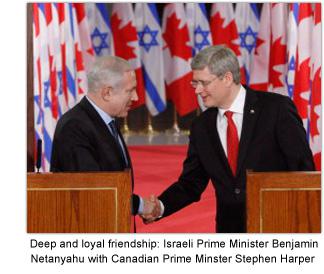 Actually, it was precisely Bercovici's views that earned her the appointment. In recent years, Canada has exceeded virtually every country in exhibiting moral clarity and standing strong with Israel. For example, when Canada lost a bid for a seat on the UN Security Council, Prime Minster Harper acknowledged it was due to his pro-Israeli position, later adding that he would "take a pro-Israeli stance, no matter what the political cost to Canada."

What is the root of this strong Canadian-Israeli alliance?

"Canadians take very seriously the values of freedom and democracy," Bercovici says. "A country like Israel is in many ways an anomaly in the Middle East: democratic, liberal, Western-oriented, and singularly besieged. For Canada, it's a matter of principle to stand up and say: 'We support Israel'."

Bucking worldwide trends, Canada voted against the Palestinian bid to join the United Nations; more recently Canada opposed the Palestinians' ascension to the International Criminal Court at The Hague.

One "political cost": on a recent visit to the West Bank, the Canadian foreign minister's car was pelted with eggs by Palestinians shouting, "You're not welcome!"

"Globally, many of the positions that Canada takes with respect to Israel, probably don't win popularity contests. Our leaders are saying: 'We are taking a principled stand on this. Full stop.' It may be for others to calculate if this is diplomatically shrewd, but this is what Canada stands for, and what we intend to support and promote in the world."

Prime Minister Harper remains steadfast in support of Israel, saying: "I have the bruises to show for it, that whether it is at the United Nations or any other international forum, the easy thing to do is simply to just get along and go along with this anti-Israel rhetoric... There are, after all, a lot more votes — a lot more — in being anti-Israel than in taking a stand... A democratic state like Canada cannot be neutral as between a democratic state and a terrorist organization. There is no honest broker between those two.”

Bercovici speaks forcefully against Islamic terror, which Canada has felt close to home. In October 2014, an Islamic car-ramming killed a Canadian soldier in Quebec, followed two days later by a jihadist attack on Canadian parliament that killed another Canadian soldier.

"These attacks sent shockwaves through Canada," says Bercovici. "The government's response mirrored that of the people: horror, disgust, and continued resolve that this threat must be addressed."

The threats are coming, fast and furious:

"We are addressing this firmly," Bercovici says, "though it's challenging for democracies to strike the correct balance between privacy and surveillance, and to know when to take pre-emptive action."

What does Canada think of Iran obtaining nuclear weapons capability? "It is a loud, clear, unwavering, unequivocal: No'," Bercovici says, proud that Canada continues to impose "some of the strictest sanctions in the world."

Becoming an ambassador to Israel is a plum position, given the exciting times in the Mideast region, and with so much attention focused on Israel.

"It's the gift that keeps on giving," says Bercovici. "Every day is amazing. Every day I meet different, incredible people, and challenges. The office is always lively, with stuff coming out of left field. Some of it's good, some of it unfortunate But it sure does make for an interesting life."

What does the Ambassador like most about living in Israel?

Israel is a beautiful, vibrant country, full of variety. The people are fabulous.

"I love the weather," she says with a chuckle. "Israel is a beautiful, vibrant country, full of variety. The people are fabulous. Israelis have a reputation for being a bit brusque, but they really aren't. Just below the surface, they have a great sense of humor and warmth."

What has been a difficult part of the adjustment?

"Obviously the conflict is a distressing part of life, and it's a constant. I think everyone in the region wishes it wasn't there. But we figure out how to manage day-to-day, and I'm very happy here."

And what about the daughter who agreed to move halfway across the world for her senior year of high school?

"My daughter loves it here. She's happier here than she has ever been. She's in a school with kids from all over the world, in a very accepting environment, living a wildly interesting life. A journey like this opens up the world."

As for this turn of events in her professional career, Bercovici could not be happier. "One friend told me: 'It's not every little girl's dream to become Canadian Ambassador to Israel. But it's yours'."