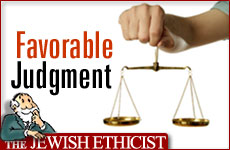 Be a "defense attorney" for questionable characters.

Q: I know I'm supposed to give people the benefit of the doubt. Does that mean I have to actually believe they're good?

But what does that mean? Does it mean merely withholding judgment? Or at the other extreme actually being convinced of the person's righteousness? Consider the following story from the Talmud:

The rabbis taught: one who judges others favorably, others will judge him favorably. There was once a man who came from the Upper Galilee and hired himself out to a certain householder in the south for three years. Yom Kippur eve he said to him, give me my pay, so that I may provide for my wife and children. He said, I have no money. He said to him, give me produce. He said, I have none. Give me land. I have none. He packed up his possessions and went home in a dark mood. After the holiday the householder took his pay, and with it three loaded donkeys, one with food, one with drink, and one with delicacies, and he went to [the worker's] house. After they ate and drank and he gave him his pay, he said: When I told you I had no money, what did you suspect? He replied, perhaps an unusual bargain presented itself you spent it on that. . . And when you asked for land and I said I had no land what did you suspect? He said, perhaps it is rented out to others. . . .He said to him, thus exactly it was! . . .Just as you judged me favorably, so may God judge you favorably. (2)

We see that the worker didn't merely say, "I assumed you had a good reason." Rather, he came up with a specific plausible explanation that would reflect favorably on the employer. So it seems that "withholding judgment" is not really enough.

On the other hand, one is permitted to take reasonable precautions towards a suspicious figure, even as one judges him favorably. A midrash states, "Let everyone be in your eyes as a bandit, yet respect him as Rabban Gamliel did". The passage goes on to tell that Rabban Gamliel took in a stranger as a house guest. On the one hand he respected the man as he would any house guest, but on the other hand he took the precaution of removing the ladder to the man's attic guest room just in case the man turned out to be a thief – which was in fact the case. (3)

It seems that the commandment of favorable judgment is to do precisely as the worker from the Upper Galilee: when faced with questionable behavior, take a few moments to consider plausible justifications. In some case they will be justifications that would render the person completely innocent; in other cases, they will at any rate minimize his culpability. (The employer certainly acted wrongly when he spent money on a rare bargain when he knew he had to pay his worker, but it is less of a crime than willfully withholding wages.)

The Jewish Ethicist: When Parents Disagree