The Writers Strike Back 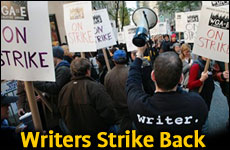 In support of the Writer's Guild, I attended a really convenient rally.

The other day I took my morning neighborhood walk with about four thousand other people, protesting producers' attempts to eliminate writers' participation in the profits to be gained from new media located in places such as websites like the one you're reading from right now. As an actress with many friends who are in the Writers Guild of America, who depends on their words to create my characters, I've a large personal stake in whether us artists will be paid for commercials, webisodes, cell phone entertainments or anything else broadcast in ways we've not even imagined yet, such as inside our contact lenses or telepathically. I also have intense personal curiosity about what's going on in my neighborhood.

You see, my street in Los Angeles dead ends at the ornate, Western gate of 20th Century Fox Studios, so all I had to do was walk out my front door and I automatically joined larger and larger throngs of red shirts (wardrobed by the Writers Guild) emerging from adjacent homes and car pool parking lots, like part of an aerial shot of an old fashioned movie musical. Don't get me wrong -- I'm ideologically committed to the cause, but the bioregional proximity of this rally requiring no gas expenditure made it my kind of protest.

My first thought was that our industry's writers look strangely out of place outdoors. Their pasty white skins now exposed to sun and smog like the unstriking, weatherbeaten teamsters, the scribes sported their Guild pins and sports team caps to protect their tender punims from sun. Their carpal tunneled paws now gripped and brandished strike signs with clever slogans, the writing of which I was assured was not a violation of the strike codes.

But then I began to think more intensely about these friends of mine, these writers, and I realized how lucky the world of entertainment is to have them. Some argue that the writer is the most important person in the creative process. He or she is the only person who creates "ex nihilo" -- something out of nothing. As we used to say in my theatre days, "if it ain't on the page, it ain't on the stage," so actors, directors, and yes, even studios owe much to these talented folk. Writing has always been within the purview of talented, creative idealists. Maybe that's why there are so many Jewish staff writers on hit shows. After all, the Jews are the "People of the Book."

Maybe that's why there are so many Jewish writers. After all, the Jews are the "People of the Book."

During the course of the rally I saw long famous folks and newly minted celebrity faces being flexed for our recognition and praise, supporting the strike. And we saw friends we hadn't seen or spoken to in years putting petty differences aside with the common enemy of unemployment putting us in the moment. After a few hours of glad handing, back slapping, good conversations and making our points loudly and cleverly, we dispersed to our separate, worrisome futures, grim in our resolve to stay struck.

And struck is where we have stayed for awhile now, the end of the strike not yet in sight. They say that at the moment, public opinion is squarely behind the writers, but I am sure their stock will increase near unanimity when viewers start to notice an increase in new reality shows like "Who Wants to Marry a Fifth Grader," and "The Apprentice: Penitentiary Edition" where they look for the next up and coming prison warden. When that happens, the man on the street may come to appreciate what I have always known: writers are a brave and talented lot, deserving of our respect and admiration. I'm willing to go to a rally to support them any day, even if it's a bit outside my neighborhood.

My Husband's Midlife Crisis
Vayelech 5783: Regret and Repent
Rabbi Sacks: Focus On the Important, Not the Urgent
Put Your Foot Down: Are Human Feet Poorly Designed?
Comments
MOST POPULAR IN Jewlarious
Our privacy policy
Aish.com Is Looking for Great Writers