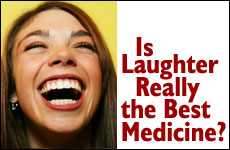 The best? Come on.

Is laughter really the best medicine? Or is that just one of those medical myths, like gum stays in your system for 7 years after you swallow it or that warm milk helps you fall asleep?

Is it just one of those myths, like gum stays in your system for 7 years after you swallow it.

The reason they say that warm milk helps you fall asleep, of course, is that it contains tryptophan, like turkey does. You eat turkey, you fall asleep, and the next thing you know, you’re up at five in the morning standing in line at Staples with a fax machine under your arm.

But yes, turkey has tryptophan, and tryptophan puts you to sleep. But do you know how much turkey you’d need to eat in order to get enough tryptophan to actually put you to sleep? Forty pounds, according to experts. I’m so sorry I wasn’t there when they were conducting these tests.

“He ate 35 pounds, and he’s still not asleep! Go get another bird!”

No, the thing that actually puts you to sleep is the fact that you have a big warm meal sitting in your tummy. That’s why a lot of us tend to fall asleep early on Friday nights, sometimes before we’ve even left the Shabbat table.

So not everything you hear about medicine is necessarily true. Nevertheless, I’ve always been a big proponent of the “laughter is the best medicine” adage, mainly because I can’t afford decent health insurance. My health insurance doesn’t actually cover anything health related. (I mainly have it because if you don’t have health insurance, you’re more likely to get sick. For the most part, having health insurance is a good luck measure against getting sick.) Basically, I have a bunch of people in a corporate building somewhere whom I notify when I’m not feeling well, and after transferring me to everyone in the entire company at least once, they cheerfully notify me that they don’t care. And also that all my insurance is going to cover is the letter telling me that they don’t care, in case I didn’t understand it properly over the phone. But at least I have laughter.

Is laughter the best medicine? I don’t know. But it doesn’t hurt. On the other hand, if you go to a hospital, I doubt you’re going to see any doctors tickling their patients.

“Coochie coochie coo! How are your broken ribs now? Any better?”

No, they don’t tickle the patients. The medical community tends to frown on that. But laughter definitely does work as a medicine. It helps people deal with stress, depression, social anxiety, and conflict, and it also works wonders on various types of heart disease. And if you see someone fall and hurt himself, you can just laugh and laugh, and it does make you feel better, and then eventually the guy will just grumble and go away. In other words, it does get rid of pain. And laughter is also the best medicine for various psychological problems. Unless it’s the cackling kind of laughter that villains do. That doesn’t solve anything, but it does clear the sinuses.

But I definitely think we should promote laughter more as a medicine; get it out there so more people know to use it. Like we should have commercials, sort of like the other drug commercials, where they introduce a medicine, but they never say what it’s supposed to combat. But apparently, if you take the medicine, you can throw a football and help your spouse across a brook. We don’t know exactly what laughter heals either, so it will fit right in.

Like we could say, “Ask your doctor about Laughter.” All those commercials say that. Like that’s my job now – to go to the doctor and start suggesting random medicines when I don’t even know what they do.

How is this my job? The system I’ve always used in the past is that is I go to the doctor, he tells me what’s wrong with me and then he suggests what I should take to fix it. I doubt I’m going to come up with anything he hasn’t heard of.

ME: “Should I be taking Voldemort?”
DOCTOR: “Yeah, that sounds good. You’ll be able to ride a horse!”
Me: “Awesome! I can’t even do that now!”

Though if we did a commercial for Laughter, we’d of course have to put in all the warnings:

“Side effects of Laughter include snorting, shortness of breath, dizziness, uncomfortable bystanders, wheezing, spitting out of food, choking, disapproving stares of others, watery eyes, loss of balance, and uncontrollable urination.”

So yeah -- it’s not for everyone, we’re not sure what it cures, and there are side effects. Plus it’s infectious and addictive. I’ve been reading jokes since I was a kid, and I don’t know if I can stop. I don’t think I want to stop. I like how it makes me feel. It’s a drug, like Charlie Sheen.

So no, I don’t know if it’s the best medicine. But it’s definitely the best tasting medicine, followed closely by the pink stuff that smells like bubble gum and those Advils with the candy coating. It’s kind of like how you say that ice cream is the best food. It’s obviously not the best food for you, but hands down, you’d rather have ice cream than broccoli. So next time you’re sick, flush your meds down the toilet and laugh while you’re doing it. Actually, that’s terrible advice. But hey -- I’m not a doctor. Don’t listen to me.

Jewish Advice for Being at Home

Zoomchas: How to have a Simcha on Zoom

Jew Year’s Resolutions?
Vayelech 5783: Regret and Repent
Rabbi Sacks: Focus On the Important, Not the Urgent
Put Your Foot Down: Are Human Feet Poorly Designed?
Comments
MOST POPULAR IN Jewlarious
Our privacy policy
Aish.com Is Looking for Great Writers