The Body, the Bridge, and the Black Hat 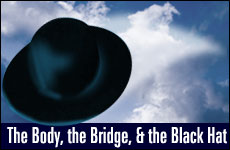 It all started with playing a dead body on an episode of one of the highest-rated series.

Like many of my show business triumphs, my mother gets naches by proudly showing off the video of me playing a dead body on an episode of one of the highest-rated series.

As an actress, there weren't many jobs which were unwanted, including the dead body. The scene was filmed on a bridge in Lower Manhattan, where my character was attacked and murdered while walking over the bridge. (All in a day's work, you know?)

My characters were not often Jewish, but on this show she was not only Jewish, she was a very religious Hassidic girl.

I found it funny to be playing a religious girl on television when I myself had just gotten slightly more involved in the Jewish community shortly before. Knowing that I appreciate a good laugh, maybe this was God's funny way to tell me that I was doing the right thing.

It was also at that time when I was just starting to see how to integrate Judaism into my show business lifestyle, wondering if the two could harmoniously mesh into my life in a simple way.

Perhaps I was going to be able to have it all -- to eventually become an observant Jew, and still pursue my acting career. I could even play Jewish roles on television!

It was a particularly chilly and windy day, and it took quite a while to shoot the scene because the tarp that was covering me kept getting blown upward by the fierce winds. You'd think it would be easy to play a dead body; it's harder than it looks!

A black hat just happened to blow my way in the wind, as I was playing the character of a dead Hassidic girl?

Eventually they were able to get the shot, and I was thrilled to finally get out of the cold. Walking off-set, I had to pass under the bridge, and suddenly I saw a fancy hat blowing in the wind. I managed to catch it, and to my astonishment, it was a black hat, the kind a Hassidic man would wear on Shabbat or Yom Tov.

This was too much. A black hat just happened to blow my way in the wind, as I was playing the character of a dead Hassidic girl?

A minute later a group of Hassidic men walked toward me, all wearing their black hats except for one.

I gave them back the hat and they asked me what we were filming. I told them about the television show, and asked them where they were going all dressed up.

Turns out they were walking to Midtown for Rosh Hashana services. They invited me to come and gave me all the information.

Ironically, the particular synagogue they were going to was only three blocks away from my midtown apartment. But I figured I would never make it in time, with shooting on set continuing often times until very late at night. To my surprise, as soon as I got back to the trailers, I was told I was done for the day, and could be signed out.

Since I had no plans for that evening, I decided to join the Rosh Hashana services and play a religious girl in real life.

That was the first of many Rosh Hashana services I attended, and the only one that fell upon me by a windblown black hat.

That night I enjoyed the service, followed by a delicious meal and a warm invitation to come back and participate in more events. Which I did.

The people were open, loving, and non-judgmental. They accepted me as I was and allowed me to grow at my own pace, with no pressure. It was something I never knew existed; I always had a misconception that religious Jews wouldn't want to have me around if I wasn't 'one of them'. Boy was I wrong.

I have since discovered that I can have my career and be a traditional Jew. I do performances for women, which is my choice, and I love it. The dynamics of an all-female audience and the support system I have is unbeatable. I do all-clean, all-kosher material with no dirty jokes and no swearing.

I have traded in the showbiz life of Hollywood and New York for the life of a traditional Jew here in Jerusalem. And I don't regret my decision at all. I am part of a thriving Jewish community, and have great friends, a successful career, and more inner satisfaction than I could have ever dreamed possible.

And I no longer have to play any more dead bodies.

My Wake-Up Call
Should I Break Up, Get Engaged or Keep Dating?
Time Is Your Precious Commodity
A Constant World in Flux
Comments
MOST POPULAR IN Spirituality
Our privacy policy