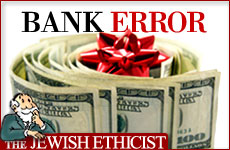 Can I keep the money the bank mistakenly deposited into my account?

Q.I recently found an unexpected deposit into my account. This has happened a few times. In the past I notified the bank, but now it's becoming a burden, I could really use the money, and besides I understand that the bank is insured against the mistake anyway.

A. I wrote about this topic once before, also with a quote from the famous Monopoly "Community Chest" card. In that column, I concentrated on the ethical aspect of the question, namely the obligation to return lost objects. The Torah commands us "When you encounter the ox of [even] your enemy or his ass straying, surely restore them to him" (Exodus 23:4, see also Deuteronomy 22:1). In order to maintain an orderly society, we are commanded to invest reasonable effort in returning lost objects, including lost money, when we can find out who the true owner is.

Since then I have done some further research, and I want to expand a bit on my earlier insights. I note that Jewish sources deal not only with the ethical aspects of this question but also some of the practical ones.

The Shulchan Arukh (authoritative Code of Jewish Law) states: "If someone receives money from his fellow and finds extra, even if [the depositor] doesn't demand them he is obligated to return them if it is a sum that is reasonably likely to be a mistake". (1)

The Shulchan Arukh implies that what seems to be a mistake is very often not a mistake at all. The first step is to consider if the deposit is a mistake; if it is, it must be returned.

My research on the "surprise credit" phenomenon (try a web search on "Bank error in your favor") revealed that in a large fraction of cases these surprises were not errors at all. They can be income tax refunds, repaid loans, forgotten deposits, etc. These deposits have important consequences; they may obligate you to pay taxes (if it is income) or exempt you from taxes (if they are refunds). They may obligate you to pay back a creditor (if it is a loan) or exempt a borrower from paying you (if it is a loan repayment). Thus it is worthwhile to contact the bank to find out exactly what the source of the deposit is.

The other thing I learned is that even when the deposit really is a mistake, the account holder ignores this mistake at his or her peril. With or without insurance, the depositor eventually finds out where the money ended up, and is entitled by law to reclaim it. Statutes of limitations on this right can be very long, and precisely because "you could use the money", by the time the depositor catches up to you, you will be very unlikely to have the money handy. In a few cases, using the money can be considered a crime.

The Talmud tells a fascinating story about Rav Shmuel bar Sosretai. The queen in Rome had lost a valuable jewel, which was found by Rav Shmuel. The queen made a public announcement that anyone who returned the jewel within thirty days would receive a prize, whereas anyone found with it after thirty days would be executed. Rav Shmuel deliberately waited until after the thirty day period and then voluntarily returned the object. The queen, seeing that Rav Shmuel was returning the jewel completely voluntarily, tried to find a loophole for him: perhaps you weren't in the city early in the month? Perhaps you didn't hear the announcement? Rav Shmuel asserted that he knew very well of the announcement, and was only returning the jewel after the deadline so that people would know that his motivation was not fear of the sovereign, but rather of the fear of God's commandments. In this way he sanctified God's name among the Romans. (2)

Evidently this was enough to save Rav Shmuel bar Sosretai from punishment, but in this day and age I am skeptical that such a claim would protect you from any legal claims, fines etc. that keeping the money might subject you to. So even those of us who are not on the exalted level of Rav Shmuel bar Sosretai who returned lost valuables only because of the fear of God, would be well advised to return any misplaced money because of concern for the many sanctions imposed by the secular law.

The Jewish Ethicist - Smart and Rich

The Jewish Ethicist: In Case of Emergency
In the Shadow of David and Goliath
Where Do the Laws of Nature Come From?
Saadiah Gaon, Rashi and Maimonides: How Three Rabbis Revolutionized Judaism
Comments