The United States of Hate 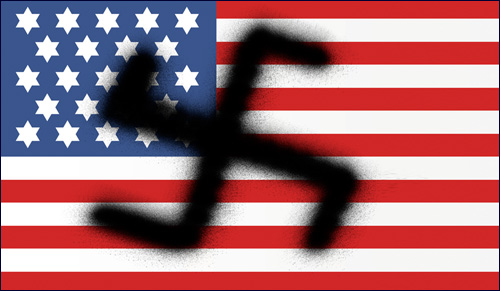 How to respond to the rise of anti-Semitism in the United States.

Jews across the United States are increasingly alarmed at the rise in anti-Semitic incidents across the country.

In December, the New York City Police Department noted a 115% increase in bias crimes in the previous month, with Jews the target of 24 out of 43 incidents in that period. On February 27, 2017, for the fifth time in recent weeks, bomb threats roiled over 100 JCCs and Jewish schools across the country, forcing students, staff, elderly members and young babies to evacuate.

A bullet was fired through the window of a Hebrew school classroom in Indiana. Jewish cemeteries have been vandalized in St. Louis, Philadelphia, and Harrisburg, Pennsylvania. Swastikas have been carved into schools, libraries, and even inside the Illinois Holocaust Museum.

A typical bomb threat included this: A large number of Jews are going to be slaughtered... There’s going to be a bloodbath…

Ironically, at the same time hate crimes have us all feeling under threat, the number of people who profess anti-Semitic feelings is at a historic low. A recent Pew Research Center study even found that Jews are the most highly-regarded religious group in America. So what is going on?

According to Ken Jacobson, ADL Deputy National Director, “We don’t have any evidence that more Americans are becoming anti-Semitic.” For the past several years, his organization has found that 12% – 15% of Americans profess anti-Semitic beliefs. That percentage is significantly lower than when the ADL first began polling Americans in 1964 when 24% of Americans said they harbored anti-Semitic feelings.

“However, 12 to 15% of the population harboring negative feelings towards Jews is 30 million or so people,” Jacobson cautions. What seems different now is that some people have become emboldened to act on their anti-Semitism more than in the past. Jacobson calls this atmosphere of hate “a crisis” in America today.

Rabbi Avi Shafran, Agudath Israel of America’s Director of Public Affairs, shares with Aish.com that "one lesson we should be taking from this uptick in anti-Semitism is to realize that even in ‘good’ times, when we don’t see eruptions of anti-Semitic acts, there are still twisted people among us who wait for an ‘opportune’ time to express their hatred. We need to realize that anti-Semitism has not been ‘cured’. And won’t be, until we merit Mashiach (Messiah).”

Extreme rhetoric against Israel has made anti-Semitism more acceptable.

Hate crime experts point to one culprit that’s made anti-Semitism more acceptable in recent years: extreme rhetoric against Israel. “There’s a loss of shame about anti-Semitism,” notes Ken Jacobson of the ADL. Rabbi Cooper, Associate Dean of the Simon Wiesenthal Center, concurs. "Much of the rhetoric against Israel has tipped over into expressions of overt Jew hatred. It’s not just opposing Israel’s policies. Some rhetoric is meant to denigrate and demonize a whole people."

Add to this the rise of right-wing hatred over the past year. "White supremacists are on campus now recruiting," notes Jacobson.

Hostile tweets encourage more virulent forms of anti-Semitism. “You started out with the hostile tweets,” Mitchell D. Silber, former director of intelligence analysis for the New York Police Department, explained. “You moved to the bomb threats against JCCs and other institutions, and now you have a physical manifestation at the cemeteries with the gravestones knocked over.”

Given this environment of emboldened anti-Semitism, what can we do as Jews, as Americans, as people of good will the world over? Here are four broad suggestions.

We need to be unified. Rabbi Abraham Cooper fears that the Jewish community is making a mistake in mischaracterizing the current wave of anti-Semitism as a partisan issue instead of a major threat that requires all Jews to respond. We can only succeed if we work in a bipartisan fashion, he notes. This is a time for the younger generation to step up, as well, he explains, and condemn anti-Semitism forcefully wherever it occurs. With so many bomb threats targeting JCC preschools, young parents are finding themselves on the front line, fighting anti-Semitism directly.

The threats to our community can serve to remind us of what we stand for as Jews. In addition to cooperating with law enforcement authorities, notes Rabbi Avi Shafran, now is the time for Jewish actions, mitzvahs, and prayer. “Above all...we must always remember that the ultimate protection of our people comes from Above, and that our merits and our prayers are what, in the end, ensure our security,” he notes. Doubling down on our Jewish identity and commitment – and even taking on new Jewish observances – can help strengthen our communities. Consider what concrete step you can take to strengthen your connection to the Jewish community.

It’s also crucial to hold our leaders to account, demanding action against anti-Semitism and other forms of hate. President Trump condemned the rise in anti-Semitism, saying in his speech to Congress on February 29, 2017 that hate crimes “remind us that while we may be a nation divided on policies, we are country that stands united in condemning hate and evil in all of its very ugly forms.” We need to be vigilant in holding all of our politicians and elected officials to that promise.

It’s crucial that we all stand up to hate, no matter where it occurs.

There are a host of legislative issues that need our support. The Simon Wiesenthal Center, for example, is advocating for the US Congress to adopt a definition of anti-Semitism that the State Department ratified in 2010. (Britain became one of the first nations to adopt this definition, in December 2016.) The center is encouraging all Americans, including the Jewish community, to get behind this effort.

Finally, it’s crucial that we all stand up to hate, no matter where it occurs. “There are haters in America,” notes Rabbi Avi Shafran, “but many, many more citizens of good will.” It’s our urgent task to build bridges with our fellow citizens, to support them when they are in need, and call on allies to help us when our communities are targeted. Today, more than ever, we need to be vigilant in condemning attacks on our fellow citizens and to insist that others stand by us in our hour of need as well.

By presenting a united front against hate, we can send the message that intolerance, anti-Semitism and bigotry have no place in our communities.