God is with the Mothers 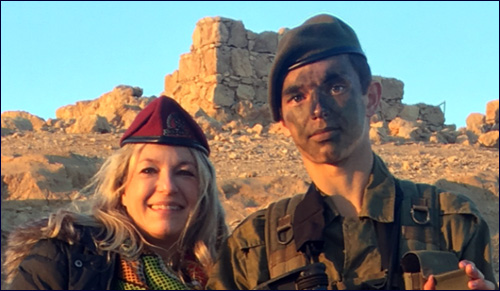 My incredible experience on the top of Masada.

When it comes to raising children I always felt that the Beatles had the best philosophy: All You Need is Love.

As a mother of four boys, I do not take lightly the importance of giving my children a well-rounded education, full of Judaism, culture, history, and the three R’s. But despite what you might have heard, it really takes more than a village.

When my oldest son, Sam, was very young, he understood only one thing about Israel – it was dangerous. The news he heard was only about war and killing. Traveling to Israel for his Bar Mitzvah was out of the question. After being kicked out of Hebrew school, he had no interest in learning anything Jewish. Not the optimal situation, but no matter, I love my Sam.

And maybe it’s that love that opened the door because as he got older, he started taking an interest in Israel. He overcame his fears and attended his younger brother’s Bar Mitzvah on Masada, and then he ventured on to Israel for the Taglit (Birthright) trip experience. In college, he began to pay closer attention to the news in the Middle East, studied political science, and became an active member in Hillel on campus.

One of his professors encouraged him to go to Israel, but not in the way you might have thought. During a lecture, the professor commented positively on the Che Guevara t-shirt and Free Palestine t-shirt that students wore to class, but scorned at Sam’s Tzahal (IDF) t-shirt. This experience created a deep impression and made a mark on his soul, pushing him to become a Zionist.

As the end of university neared, Sam decided his next step was to become a part of the Israeli Defense Forces. I have to admit, I was nervous, but so proud.

The traditional track following college is to apply for good salaried jobs and begin a career. But Sam wanted to give back, to help keep Israel safe and to be a part of something bigger than himself. I knew in my heart that Israel was the place he needed to be. 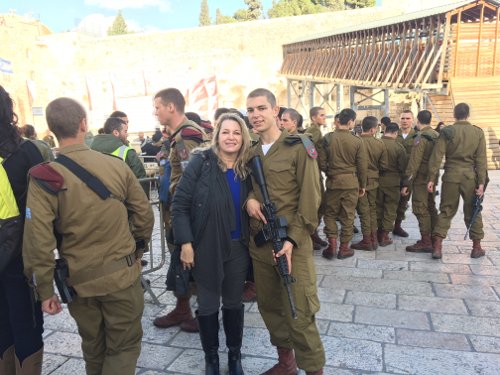 With my son at his induction at the Western Wall

Throughout basic training, he struggled learning Hebrew but eventually he became more comfortable. We don’t have any family in Israel, but everyone we met offered him a place to stay for Shabbat and anything else that he needed. He really felt at home. The physical part of his training was difficult, but he never complained; he enjoyed the challenge. He created a tight bond with some of the other Lone Soldiers in his unit that wanted to be a part of the Special Forces. His friendships with soldiers from all over the world have been one of the most rewarding parts of his service. They have grown together and supported one another through many challenges. They have become like family.

I am proud of the milestones that Sam and his unit have reached. Now as a member of the Tzanchanim unit, the next part of his Jewish journey will be the Tekes (Induction) ceremony at the Western Wall where young soldiers receive their M-4 rifle and their Tanach (Bible). I didn’t want to miss it so I came to Israel.

In addition to watching my son grow up and become a soldier, I also came to celebrate the Bar Mitzvah on Masada of the son of my very dear friends, the day before my son’s induction.

At 5:30 a.m., the Bar Mitzvah group boarded the cable car to the top of the Masada mountain where palaces adorned the sky built by Herod. We witnessed the history of the Jewish people and glory of the Judean Mountains with a bird’s eye view. 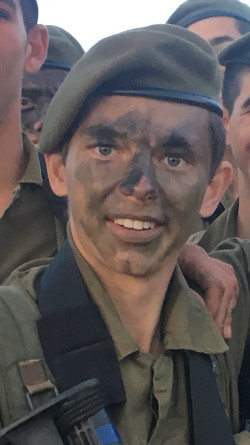 My son on Masada

The Bar Mitzvah boy spoke about how we Jews are the same people still living in the same homeland for thousands of years while the others have completely vanished. As we watched the sun peak over the horizon, a new day was beginning and another young, Jewish boy was on his way to becoming a part of the adult Jewish nation.

We noticed a large group of soldiers arriving. They looked so young. I started snapping photos of those holding Israeli flags, singing and marching. Then I realized this battalion wore maroon berets, symbolizing the Tzanchanim, the paratroopers. I began to ask the soldiers questions: Did you hike all night last night carrying 50 pound bags? Do you have a unit of soldiers ready to be inducted at the Western Wall tomorrow?

The commanders answered in the affirmative.

Then it occurred to me: “Do you have a soldier in your unit named Sam Greenfeld?”

“Yes, he’s right there,” a soldier replied, pointing to the crowd of green uniforms behind me. 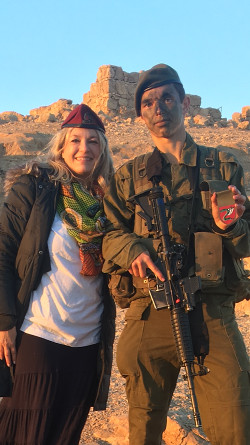 A surprise reunion with my son, the soldier

My heart stopped. Nothing can describe the moment when a mother sees her son in uniform. It had been seven months since we had last seen each other. Stunned and overwhelmed from the long night field march, Sam could not believe his eyes; he was just as surprised as I was. Who would ever believe that we ran into each other at 6 am on the top of a mountain in the middle of the desert?

As we hugged, some of his fellow soldiers asked how I knew he would be there. I had no idea! Our meeting was a precious gift from God – a moment of Divine providence that I will never forget.

The commanding officer put his maroon beret on my head while I witnessed the ceremony as my son received his Tzanchanim badge, a snake with wings. Amongst the 400 soldiers, there was only one mom watching and singing Hatikvah with tears streaming down her face. Within minutes, the soldiers were gone. The moment had passed, and we captured it. As the only parent in attendance, I hope I was able to represent the mothers of the hundreds of boys in the Tzanchanim unit by praying for their safety and the safety of Israel.

I felt God right beside me that day. And may He be with the IDF soldiers protecting them every day.

A Land Devoid of Peace

Going Up to Israel
Chukat 5782: Let’s Play the Blame Game!
The Sin of Moses: The Two Ways to Communicate
In Aftermath of Chicago’s July 4th Shooting, Local Moms Provide Countless Points of Light
Comments
MOST POPULAR IN Israel
Our privacy policy