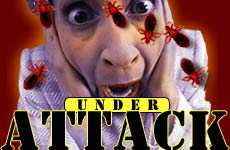 I had contingency plans for many emergencies likely to strike during my absence. But tiny disgusting insects congealing to my children's heads was one I hadn't figured on.

My husband and I had just landed in New York for a weekend getaway, our
first in three years. After working day and night for a week to get ready
for the trip, I felt heady with excitement. I had even managed to get
through airport security without having to take off my shoes or surrender
my tweezers. Life was good.

We were still in the car heading to the hotel when my cell phone starting
thrumming in my purse. I sensed this was a bad development. The only
people who call me on the cell phone are my kids, and they only call to
alert me to a crisis, such as the discovery that we are out of ketchup and
it's hot dog night.

I answered fearfully, the way one does when one suspects it's the principal
calling again, saying it's time to reconvene to discuss young Cheyenne and
her "need for excessive socialization during class."

"Hello, Mommy?" It was my charming young daughter. "Bad news, Mommy. Me
and the boys have lice."

Now I like to think I'm a pretty good mom, and as such, I had contingency
plans for many emergencies likely to strike during my absence, such as ear
infections, civil unrest and earthquakes. But tiny disgusting insects
congealing to my children's heads was one I hadn't figured on.

"You have LICE???" I fairly screamed across the nation. "Are they sure?"

"Yeah. You need to pick us up. They don't want us in school."

"I can't pick you up, because you are in Los Angeles and I'm on the Long
Island Expressway!" After stating this simple fact, I broke down in tears.
Why had the good Lord done this to me? I tip fairly. I hold doors open for
people. I don't even eat the last donut in the box, and don't think that's
an easy thing. Where was the justice in this?

Talk about a bad hair day.

For the next several hours, I cursed the fact that I hadn't coughed up the
extra few bucks for the national calling plan on my cell phone, because I
had to make about 75 calls, all of which entailed crippling roaming charges. But I had no choice. Hours of time spent making elaborate childcare and sleepover arrangements were down the drain. Who would take my plague-infested children now?

I started calling in favors (real and imagined) from friends and relatives. No amount of pleading, begging or groveling would be beneath me. It would take a village to de-louse my children. And the villagers would have to -- I was on vacation!

I mean, talk about a bad hair day.

But that wasn't all. Because, as everyone knows, once lice are in the
house, you also have to launder every scrap of material under the roof,
every stitch of clothing, bedding, and teddy bear, (no matter how fragile).
Or, if you are unwilling to do 450 loads of laundry, you can simply take
all the contents of your household, including the children, and have them
hermetically sealed for two weeks, after which time experts claim it is
safe to unseal them.

After knocking back a few margaritas later that evening, I basked in the
comfort of knowing that I had real, true friends, the kind who buckled
under the pressure of hearing my cries of desperation. I had friends who
actually came over to lather up my kids with expensive anti-lousing agents
and launder my every possession.

I also discovered who wasn't my friend -- namely, the Commandant of Lice at the school. She was the one who at first told me not to worry, she would take care of my kids till the end of the day until their carpool picked them up. She made it sound as if she were just doing it because she was filled with the milk of human kindness.
She then presented me with a bill for 250 smackers upon my return for services rendered.

I still didn't get off so easy. Even now, two weeks later, yucky things are
still hatching on my kids' heads, we are still laundering like crazy and
oiling each other's heads. Feeling paranoid, I even had the kids begin to check my own scalp, which they were happy to do and which elicited many gasps of "Oh my God! I didn't know you were so gray!" and "I think I see something! Oh, never mind, I think that's just rust."

We are now resorting to more drastic measures, and one of my sons now
sports a military crew cut. If these diabolical creatures don't stop
erupting in our hair, the rest of us will do the same thing, and I will end
up looking like Sigourney Weaver in the movie "Aliens." (Well, since she's
eight inches taller than me maybe I won't look exactly like her, but once you're walking around with a shaved head, who notices the rest of you, anyway?)

All this goes to prove one thing, in my opinion. During these times when
many of us still fear the threat of domestic terrorism during air travel,
we don't even know the half of it. The real danger may be nesting in our
kids' hair.