Planet with no Jews, blames Jews for their problems

JEWLARIOUS SATIRE -- Last week, European astronomers announced that they had discovered an earth-like inhabitable planet, dubbed Gliese 581c, only five times as large as Earth and a mere 20 light years away.

After staring down the barrel of an enormous echelle spectrograph for years, the Swiss led team announced that they had "discovered an awe-inspiring light in the distance of the universe -- one that brings hope and speaks of vast potential for mankind and the universe for years to come." Seconds later, research team-member Xavier Delfosse, asked a colleague to adjust the spectograph's focus "a little to the left" and exclaimed, "Oh my. It seems that this planet is inhabited by rabid anti-Semites and I think that they have organized a parade."

A shocked Delfosse continued, "While anti-Semitism is prevalent in virtually every country on earth, regardless of whether or not Jews even live in those countries, we hardly expected to uncover it so quickly on Gliese 581c." 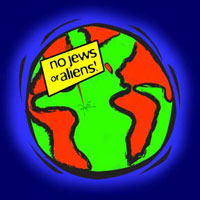 Jostling around the spectrograph for the first look at true extra-terrestrials, team member Jan Nordau blurted out, "Hold on, I can read the signs. One says, ‘A cabal of Jewish lenders controls the Milky Way's banking systems' and another says, ‘AIPAC forced Bush into Iraq and Afghanistan.'"

Contacted in his Washington, DC office, Abraham Foxman of the Anti-Defamation League remarked, "Like I don't have enough work on my desk? Now I have to educate another planet?"

"One of the signs says, ‘A cabal of Jewish lenders controls the Milky Way's banking systems.'"

Meanwhile, the Arab league immediately drafted a resolution declaring "Gliebe 581Cians honorary Arabs as they too are victims of Israeli colonialism and aggression." The League also demanded that the UN Relief and Works Agency for Palestinian refugees allocate $500M to set-up displacement camps for Gliebe 581Cians dislocated by the Israeli occupation.

With such astounding evidence of life beyond earth, scientists bypassed the traditional debate about whether it would be possible for human beings to live in space. Instead, the focus centered around how these rabid anti-Semites could have existed in such conditions for so long. Team member Elsie Rasmussen, hypothesized, "It must be a particularly virulent strain of anti-Semitism to exist in such a climate."

Immediately, team Xavier Delfosse contradicted her and suggested, "There is one thing that is consistent among anti-Semites -- a prevalence of oxygen in the atmosphere and a lack of oxygen to the brain."