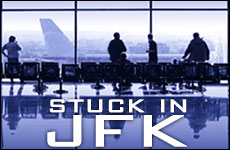 Your everyday actions can affect the entire world.

I am sitting in Terminal Four of JFK, as I will be for the next four hours and nine minutes because I just missed my flight by one minute. Northwest Airlines has a policy that if you don't check in up to 30 minutes before your flight, they can give your ticket away. My flight was at 12:26 PM. Racing from Far Rockaway, I ran up to the kiosk and swiped my card at exactly 11:56 AM, which according to my teacher in 3rd grade, is exactly thirty minutes prior to my flight.

Unfortunately, the kiosk directed me to a ticket agent, who very unapologetically told me that he couldn't help me because the machine locked him down already. That was the exact moment that machine took over man, and as a consequence our planet is doomed to be run by machines within a few short years. (Some people think the world is already run by machines such as cell phone, computers, and gaming consoles. They say that these machines rob people of their privacy, dignity, and family life. When hundreds of people waited outside in a queue for days on end to buy a Playstation 3, I started to see their point.)

So I sat down in those plush comfortable airport benches and started to wait. Since I was located near a security checkpoint I got to watch the following exchange. A young man had just bought a drink from one of the many stores lining the terminal. As he got to the checkpoint they told him that he couldn't bring his newly acquired drink with him due to new security measures. The man didn't look like he could afford to toss the soda he just paid $3.75 for, but he needed to go through to make his flight. So he started arguing with the TSA (Transportation and Security Authority) official that it isn't fair that people sell sodas all over the terminal without warning customers that they will have to part with their purchase five yards down at the security checkpoint. The TSA official, in common bureaucracy fashion, replied, "Well, you should've checked the regulations on TSA.org."

I was not about to get up and try to arbitrate between a very angry man and a very adamant bureaucrat, but I started thinking, "How did this all happen? Why are we not allowed to bring any liquids past security unless its less than 3 oz. and stuck in a Ziploc bag that you can buy from the closest stand for a hefty 89 cents?" Then I remembered the terrorist plot foiled in England, in which they found a large number of terrorist who were planning on blowing up many planes simultaneously using volatile liquids as bombs. One group of ten to 15 bad men try to do a bad thing, and billions of travelers all over the world have to suffer the discomfort of very strict liquid regulations on all flights! (I think Air Uzbekistan didn't adopt the regulations so getting through their security is probably a breeze.)

This reminds me of a teaching of our Sages which at face value seems hard to understand, but using this as an analogy it becomes clear. The Sages tell us that we all have incredible spiritual powers; every action we do has an effect on the whole world. Every good action that we do elevates the entire world and every bad action that we do brings the entire world down with us.

Here in Terminal 4, I was getting a simple yet powerful example of how the actions of a few individuals, negatively impacted so many around the world. With today's technology, examples of this concept abound. With one click of the mouse a hacker can release a virus that will destroy people's computers all over the globe, yet with a different click, a lecturer can launch an MP3 or an article into cyberspace where it will touch millions.

There is a phenomenon in the world of physics called "the butterfly effect." This refers to the idea that a butterfly's wings might create tiny changes in the atmosphere that ultimately cause a tornado to appear. The flapping wing represents a small change in the initial condition of the system, which causes a chain of events leading to large-scale phenomena. Had the butterfly not flapped its wings, the trajectory of the system might have been vastly different.

This knowledge is extremely empowering. It helps us realize that the small actions that we do can have a big ripple effect.

At work, you go over to a harried co-worker and give him a compliment, mention how you notice he is working so hard, and what a good job he is doing. This really lifts your co-worker's spirits, and when he comes home that night, he spreads the positive energy by telling his wife how much he loves her and that she looks great. She's a little surprised by the praise, but later when talking to her son, she remembers to tell him that his parents are proud of all the hard working he has been putting into school lately. The kid blushes and says, "Aaww... it's nothing," but later when he is on the phone doing homework with the class nerd he says, "You know what, man? You're all right." This is the biggest compliment that the boy has received in three years! So he, in turn...

You get the idea. The story continues on and on. And it was all started by one small action on your part.

The Sages teach that "doing one mitzvah leads to another mitzvah." This can be understood to mean that when I do one mitzvah, it causes others to do mitzvot as well. My act of kindness can inspire other to act kindly, and soon the chain takes on a life of its own.

The action that started the chain may not seem glamorous, but then again neither does a butterfly flapping its wings. Yet the consequences can be significant. So let's be a little more mindful today in starting the "mitzvah effects" that will make this world spin on a more positive axis.

The Blind Woman at the Gym