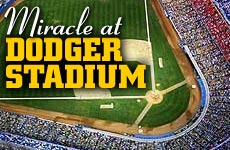 One Sunday afternoon this summer, it was "Jewish Community Day" at Dodger Stadium. My intrepid co-workers at Aish LA and I decided it was as good a reason as any to hold a social event -- good seats, low price, with the word on the street being there were even kosher hot dogs to be found.

Recruiting for the event proved to be easy -- and I was happy to be able to add this event to Aish LA's list of great "social programs" for the year.

Little did I know that the Almighty had something even better up His sleeve.

As the event drew near, something began to tug at my conscience -- actually it was five somethings. In all the planning for the event, I had forgotten to ask my wife, Deborah, if she also wanted to attend the game -- and bring our four great little kids -- ages 7 down to 2. None of them had ever been to a baseball game before, and here it was, Jewish Day at Dodger Stadium! Could I really offer tickets to my students without making room for my family?

My wife was enthusiastic about our whole family attending, so I resolved to call the ticket office before the end of the week. I wasn't worried about getting tickets because, being from the East Coast, I didn't think many people would care enough to attend the "cross-freeway" rivalry between the Los Angeles Dodgers and Anaheim Angels. (Sure, the Angels were the World Series champions -- but in my mind baseball starts and ends in the Bronx.)

So when Friday passed and I hadn't remembered to call for tickets, I wasn't worried. I figured that even on Sunday, in a stadium that fits 60,000, there had to be tickets for my family.

On Sunday morning I remembered to call the ticket office -- only to be told that the game was S-O-L-D O-U-T. No tickets at all, anywhere. Zip. Nothing.

I went into a minor panic. What to tell my wife? What to tell the kids? I quickly called home. "Hi, honey. What's going on?"

The kids are all excited. We've been making popcorn all morning!"

"Oh, nothing. Just getting ready for the game. The kids are all excited! We've been making popcorn all morning!"

Right. Excited to go. Hot dogs and popcorn. I started to pray. God, I need help on this one. Visions of my children, 20 years in the future, flashed before my eyes. Scarred and bitter over this broken promise. Hurt. Disappointed. And worse, a long Sunday ahead -- with absolutely no backup plans for the kids!

I rushed home. As I opened the door, I was greeted by four little baseball caps, each one more heartbreakingly cute than the next. The boys even found a baseball cap for my two-year-old daughter, whose face kept getting covered with the rim every time she looked up at me, her great Abba, who was supposedly taking us all to Jewish Day at Dodger Stadium.

I walked into the kitchen and did what any self-respecting rabbi would do; I threw myself on the mercy of the court. "What are we going to do?" I asked my wife. "I can't skip the program -- but the kids are going to be crushed."

We called an "emergency conference" -- no kids allowed -- and put our heads together. My wife suggested that we tell the kids the game was sold out, but that we would get in the van and go there anyway. Along the way we would daven to the Almighty for help. Maybe something would work out and we'd still get in. But just in case God said no, we wouldn't be upset, and Mommy would take them to do something else fun for the day.

With our battle plan ready, my wife and I presented this strategy to the kids, who stared at us from under their baseball caps. Somewhat skeptical, the kids agreed to get in the van, not to whine, not to ask too many questions, to daven, and remember that sometimes He says, no, and that's okay. (I wasn't sure if this last part sunk in, but we had an agreement.)

We set off, but it wasn't long before my cell phone rang. It was Aish LA's program coordinator. She told me that the radio was reporting a flood of cars headed for Dodger Stadium and that the game was totally sold out.

I told her about our plan of effort and prayer. "Okay," she said, "but you're really going to need a miracle to get into this game!"

The scalpers wanted $140 for tickets. The Almighty would have to answer us in other ways.

As we neared the stadium the traffic got heavier and heavier. We started asking people in the cars near us if they had extra tickets. No one did. As we got near the entrance to the parking area, there were scalpers. They wanted $140 for four tickets. That I couldn't do. The Almighty would have to answer us in other ways.

The sign at the entrance to the parking lot said, "Sold out -- ticket holders only." Well, I had a ticket, so I guess that gave us permission to continue on. We told the kids, "Let's just park and see what happens. Maybe we can get close to the game. You never know. Are you davening?"

Just then, Yehuda, my second son, let out a sweet little prayer: "Please, God, let us get into the Dodger game."

We parked, grabbed our snacks and water and diapers and all the other stuff that goes with carting around a family these days -- and the baseball caps -- and started toward Dodger Stadium, which stood on a hill, high above us.

As we walked toward the stadium, my wife, always more outgoing than I, suggested we ask people if they have tickets to sell. And so we began looking for sympathetic faces. In the big multicultural mix that is Southern California, which type of fellow human would want to sell us their tickets at an affordable price?

Just then a huge, yellow and black pickup truck pulled into a parking spot. It looked like the kind of truck that should have a gun on the back, and the guy inside looked like he had a few guns at home, too. To my eyes, a real blond, tough guy -- the kind of guy you'd be afraid to
walk by in the middle of the night.

We touched eyes for a long moment. I assumed he was noticing my kippah and my kids with their peyos (sidelocks) coming out underneath their baseball cap, and that he wasn't too happy with the fact this was Jewish Day at Dodger Stadium.

I quickly dismissed the idea of asking this guy if he had tickets to sell. I preferred not to end up on the front page of the Los Angeles Times as a statistic of some meaningless hate crime. So I looked away to find that elusive sympathetic face who would sell me five tickets at a reasonable price.

A few seconds later I heard my wife behind me asking someone if they had extra tickets to the game. I turned and saw her talking to the pickup truck guy. He said he did have some tickets. I turned back to see if he was serious, or joking, or maybe about to start trouble.

"How many tickets do you have?" I asked.

Exactly as many as I needed!

"How much do you want for them," I asked, wondering how much over the regular cost he was going to be marking up the price. Poor kids... can I get them into the game after all?

I stopped in my tracks. I couldn't believe what I was hearing. I was so blown away that I actually said, "What are you, an angel from heaven?!"

And this tough-looking character just smiled and said, "No, but I am from Tel Aviv. Shalom Aleichem!"

"Wow!" I said. "Aleichem Shalom! Thank you! But please, can't I pay you something for these tickets? I mean, the game is sold out!"

I like to see your children -- they remind me of home.

He handed us the tickets and continued on, as my wife broke into a huge grin. "Aren't you glad you married me?" she said.

We were nothing short of flabbergasted. "You see that, kids? We davened and davened and the Almighty answered our prayers!"

I started calculating the odds: 60,000 people at the game. Roughly 20,000 cars. Countless parking lots around the stadium. And the one person who can solve my problem pulls right up beside me. Five extra tickets. A nice Jewish boy from Tel Aviv. And the price -- free!

It was a miracle at Dodger Stadium. A great lesson for my kids. And an even bigger lesson for me.

David Ordan is a rabbi at Aish HaTorah Los Angeles, where he lives with his wife, four children, and their baseball caps.

Avoiding Mother Burn-Out
It Takes A Lot Of Faith To Be An Atheist
How Instagram Brought Back This Nostalgic Soup
What Makes Eli Run?
Comments
MOST POPULAR IN Family
Our privacy policy