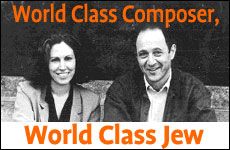 Steve Reich at 70: A Personal Reminiscence

The whole world seems to be celebrating Steve Reich's 70th birthday (October 3, 2006). Steve was recently called by The Village Voice, "...America's greatest living composer." The New Yorker said that he was "...the most original musical thinker of our time," and The New York Times raved that he was, "...among the greatest composers of the century." The Guardian (London) summed it all up by stating, "There's just a handful of living composers who can legitimately claim to have altered the direction of musical history, and Steve Reich is one of them."

Steve was awarded the Praemium Imperiale Award in Music, the equivalent of the Nobel Prize.

For the first time ever, the three most important musical venues in New York City, Carnegie Hall, Lincoln Center and the Brooklyn Academy of Music (BAM), have joined efforts to mount a tribute to a living composer. Steve Reich concerts are being presented in cities all over the world. In Tokyo, in October 2006, Steve was awarded the Praemium Imperiale Award in Music, the equivalent of the Nobel Prize, presented in areas of the arts not covered by the Nobel awards.

I first met Steve Reich in 1974, when he and Beryl Korot, his then girlfriend and now wife, walked into the Bible class that I was teaching at the Lincoln Square Synagogue on the Upper West Side of Manhattan. The class was a review of the weekly Torah portion, and both Steve and Beryl were eager students. After a while, I noticed that Steve traveled frequently, but before departing he would always ask for the following week's assignment. I started receiving postcards from all over the world informing me that he had done his homework and would hopefully be back for the next class. In class, he often asked questions about the material we studied and offered novel insights into the subject matter, as well. I soon learned that Steve was an upcoming musician/composer and was performing all over the world. 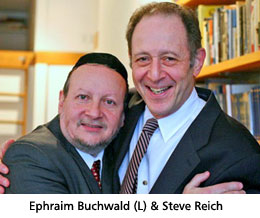 One day, while walking up Broadway, I noticed a flyer taped to a lamppost. The flyer had a musical score on it and announced that Steve Reich and musicians were scheduled to perform at Columbia University. I had a strong suspicion that it was the Steve Reich from my class, but I was not certain. My wife, Aidel, and I decided to attend the concert not knowing what to expect.

The audience, composed mostly of university students, were hanging from the rafters. I had never heard Steve Reich's music. I knew that it was modern, and I for one never cared very much for modern music. I soon learned that Steve was one of the fathers of what is known as "Minimalist" music. What I heard that night was very creative music, based on subtle repetitions. Usually one percussion instrument repeats a brief musical theme again and again and again. Suddenly one note or one beat changes, and the music line is delicately transported into a new musical line or beat. It was hypnotic. The students in the hall appeared to be tripping, not on drugs, but on the music! It was truly mesmerizing. After the program, we took a chance to see if we could catch Steve on stage. As soon as he spied us from afar, he excused himself from those around him and ran over to us with a broad smile exclaiming, "My rabbi is here, my rabbi is here!" and gave me a big hug.

Steve took his Jewish studies seriously. He decided that he needed to learn and try to master Biblical Hebrew. We teamed him up with Rabbi Dr. J. Mitchell Orlian of Yeshiva University who became his mentor and taught him advanced Hebrew grammar and ta'amim (cantillations of the Bible). I couldn't understand why Steve was so keen on mastering this obscure subject matter, until I realized that he had decided to include Jewish themes in his music. One of his great pieces of that era (1981), is called Tehillim -- not Psalms, but Tehillim. The skills that he gained and his mastery of cantillations and Hebrew grammar are obvious in that musical piece.

While Steve's contributions to music are universally acknowledged as monumental, his contributions to contemporary Jewish life are equally important. It was Steve and Beryl who suggested to me in the Fall of 1975 that they could benefit from a special Shabbat service specifically designed for those with little or no synagogue background. Steve Reich and Beryl Korot are, in effect, the father and mother of Beginners Services all over the world.

In December of 1975, we launched the first Beginners Service at Lincoln Square Synagogue. The participants consisted of myself, Steve Reich, Beryl Korot, and another person, an accountant by the name of Stephen Reich. At that time Lincoln Square had become the "in place" to be. While the Beginners Service took place in the huge cavernous ballroom on the lower level, upstairs, in the main sanctuary, the best show in town was taking place with the charismatic Rabbi Shlomo Riskin, then known as Steven, (sometimes called "Stevie Wonder"), and the fabulous Cantor Sherwood Goffin. Who in their right mind would want to come to a service that was known as a Beginners Service? The name itself was a deterrent. The truth is, that very few people were interested, and for six months it remained the four of us, except for one strange character who would come in every other week on roller skates, with a tennis racket in hand, and ask: "How do you know that there is a G-d?" After the first six months a few more people started coming and eventually it built up to about 20-30 people each week.

In March 1981 the New York Times got word of the Beginners Service and sent a reporter who wrote a flattering front page, second section story about the service in the Saturday paper. The rest is history. People began attending in droves. In order for the Beginners Service to impact properly on its participants, I decided to limit the number of people attending the service by moving the service to a room that had a maximum capacity of 50. It was often standing-room only. Those who arrived late waited in the halls to enter, and I had to forcibly "graduate" people after they had heard my jokes five times.

Today there are between two and three hundred Shabbat Beginners Services that are conducted on a regular or semi-regular basis throughout the US and Canada. On Rosh Hashanah and Yom Kippur that number swells significantly. Beginners Services can also be found around the world. In fact, on the High Holidays, many Beginners Services are offered throughout the State of Israel by the Israeli rabbinic organization, Tzohar. All this is ultimately due to Steve Reich and Beryl Korot.

Many of Steve's compositions since his arrival at Lincoln Square Synagogue have a Jewish connection or Jewish theme. Different Trains compares cross-continental trains in the US to the trains of the Holocaust. The Cave, a video opera that he composed in collaboration with his wife Beryl Korot, a prominent video artist, is about the Tomb of the Patriarchs in Hebron. Tehillim (1981), and You Are (Variations) (2004) include texts from Rav Nachman of Breslov, Psalms and Pirkei Avot. The newly commissioned Daniel, composed in memory of the murdered Wall Street Journal reporter, Daniel Pearl, is based on verses from the Book of Daniel.

I had the privilege of officiating at the marriage of Steve and Beryl and being at their son, Ezra's brit. These days, Steve almost always wears a baseball cap, even while performing. When he lived in SoHo he prayed at the Boyoner shtiebl. He now belongs to a small up-and-coming Orthodox synagogue in Westchester.

It is so wonderful to see that Steve is being acknowledged for his music. But, both he and Beryl deserve to be recognized for their special contributions to Jewish life as well. I would bet that there are tens of thousands of Jews whose lives have been enriched because of Steve and Beryl's request for a Beginners Service. Steve may or may not be America's greatest living composer, but he certainly is the greatest living composer who has had the greatest direct impact on Jewish life. He has not only altered the direction of musical history, but has also altered the direction of the lives of many Jews who, were it not for his and Beryl's momentous contribution, would otherwise never have had any part in Jewish life.

Happy 70th birthday, Steve Reich, it's a privilege to know you. Mazal Tov.

Ephraim Z. Buchwald has been the rabbi of the Lincoln Square Beginners Service since December 1975, and is the Director of the National Jewish Outreach Program.

An Old Story: Anti-Semitism, Past and Present

54 Ways You Can Help Israel

Evangelizing the Jews, Part 2: Who is Most Vulnerable?

The Shofar's Stirring Message for Today

Tragedy in Meron
Korach 5782: Visit to Lift the Spirit
That Time The Ivy League Found A Way To Limit Jewish Enrollment
Would You Rather Be Right or Happy?
Comments
MOST POPULAR IN Israel
Our privacy policy