So You Want to Move to Israel? 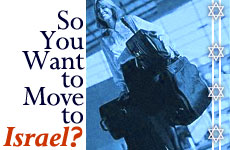 When I told people that my husband and I, with our five kids in tow, were moving to Israel, they thought I was crazy. At some level, I wondered the same thing.

I remember the first time I publicly revealed my plans to make Aliyah to Israel. I had telephoned the president of our local Jewish day school to tell him that I could not serve on the board for the upcoming year because my husband and I, with five little ones in tow, were moving to the land of milk and honey. In the midst of the Intifada.

"You are moving to Israel," he said slowly, as if I must have undergone a lobotomy.

"Yes," I replied, feeling like I was having an outer body experience.

"And this is something you want to do," he said, indicating his further confirmation of my temporary mental imbalance.

At some level, I wondered the same thing. Even a cursory inventory of the muster it takes to move to Israel is enough to make the most desirous of Zionist dreamers wither in their tracks, and I have to admit, at the time I was no Zionist dreamer. Initially, we had simply wanted to live closer to my husband's family who all live in Israel.

But being close to family was not a sufficient impetus; we had discussed the move for almost ten years -- ever since we got married. There always seemed to be a good reason not to go. And then, one night, as I put my four year old to bed, I sat next to her and watched the slowing calm of her familiar breathing, her rounded cheeks and lips puckering in and out, as she lay in a cocooned slumber that only a child can know. She looked so helpless, innocent, and it made me do the most natural thing for a mother -- it made me worry. My thoughts started to wander. What would her life be like? Who would her friends be? What outside influences would shape her -- teachers, not-so-desirous contemporaries? I worried about the values and character traits she would develop.

No matter how gracious the foreign host country where a Jewish spirit resides, it isn't home.

Like any parent, I wanted my children to be raised with pride, with a feeling of solid identity. I hoped that the foundation, the core of their personality, would flourish in a land in which every facet of life, even the secular, embodies some representative core of the collective Jewish soul.

It struck me that for a Jew, Israel is pure nourishment, like water for the body. No matter how gracious the foreign host country where a Jewish spirit resides, it isn't home. Home is everything familiar; it is connection; it is roots. It is the unspeakable understanding that you, as a Jew, are somehow connected to every other Jew.

I took a second look at our desires to live close to family; to know who their Savta [grandmother] is, to know intricately the native language of our prayer, to know what it is to celebrate Sukkot along a lined pathway of reverberating sukkahs, and to know that all-encompassing feeling of belonging. These aspects seemed to tower over the benefits, no matter how important, that we would be relinquishing.

Around this time, my husband's father had a minor surgery. We also learned that the upcoming school tuition would sprawl to a mentally unfathomable $22,000 for three preschool children to attend half-days. With renewed commitment, we reopened our Aliyah file and I plunged into the mire of Aliyah details, four months pregnant.

Three months after our baby was born, we began our journey -- seven family members, 24 suitcases (it took a caravan of three trucks to actually take us to the airport), and one 20-foot cubic container.

It is now just over two years later and I must admit that it has been one of the most difficult transitions I have experienced. I never fathomed the magnitude of the transition -- the family, friends and community we would miss; the barrier of the language and the simple ability to understand and express myself whether overjoyed or overwhelmed; the variant careers paths; and giving up all that is familiar -- knowing where everything is on the grocery aisle, the educational system, the friendly bank teller, our pediatrician, over-the-counter medicines that worked best when our children had fevers, and an endless list of what comprises the daily routines that constitutes the comfort of the familiar.

Yet there is no description for the sense of holiness that pervades Israel -- despite the traffic, the long lines, the belligerence, affectionately known as "chutzpah." The Talmud says that "to acquire Israel, you have to suffer." Isn't this true of all that is worthwhile, of every milestone which a person accomplishes on his life's journey? There is a pride that comes from knowing that despite the cultural obstacles, the ongoing terrorist attacks which threaten us, the bureaucratic headaches, you have somehow done it. You made the move; you are privileged to live every day in a land that our recent ancestors could only dream about.

And everything fits so smoothly -- you don't have to explain to anyone what Purim is, esrogs abound before Sukkot, shuls fill many corners, and the opportunities to learn Torah and grow spiritually can almost drown you. There is an endless, engaging energy -- a pulse and a grace -- that comes from the beat of the nation, a natural proud defiance that we exist in spite of every imaginable obstacle and by the grace of God.

The Land of Israel embraces our people, and it waits for you like a mother with outstretched arms that never tire.

And, of course, there is the incomparable sensation of seeing your children deliriously happy because Israelis don't only like, they love children, and they love your children. Everyone here, including the men, is a Jewish mother and ready to offer you advice on how to raise, educate and form the character of your little ones.

For children, the cultural environment is more intoxicating than a trip to Alice's wonderland. My children are filled from the minute they rise until they settle in at night with a womb of Jewishness.

Living in Eretz HaKodesh, the Holy Land, represents so much - the voracious struggles, the nobility of countless lives lost in defense of it, the gusto of moment-to-moment living, the reflection of our values, and the hope of our redemption. It holds the memories and traces of great spiritual and secular giants whose paths crossed here centuries ago. Eretz Yisrael embraces our people, and it waits for you like a mother with outstretched arms that never tire. It teaches you a pride and a respect for the tenaciousness of our people, who refuse to give up, who acquire Israel through their daily struggles. These are the heroes of our collective present. They safeguard the homeland for all of us, so that another generation will have the hope to return.

The powerful force of this place has brought out in me an energy that I never knew. Yes I have learned where the items are in the grocery store. I like our new pediatrician and our friendly neighbors who keep a lazy eye on our children as they play outside in the sandbox. I like visiting Savta on a weekly basis and I have been blessed with a good place of employment. It has all come together with the clear, permeating warmth of a Divine hand.

In memory of my mother, Chana Leah bat Rivka on the fifth anniversary of her Yahrzeit, 22 Shevat.