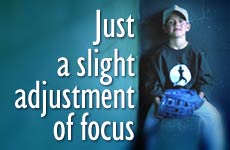 Raising happy children sometimes depends only on a kind word and a moment's extra attention.

A friend of mine, who has known our children a long time, took me over to the side during a recent visit. "Eli doesn't seem so happy," she said of my nine-and-a-half- year-old. "Is he O.K.?"

Now that she mentioned it, I realized my little boy had indeed been ornery lately. Maybe there was something going on in school - something with his teacher, I thought. Reprimands in class, maybe, or not enough joy in the learning. At the first opportunity, I asked Eli how school was. "All right," he muttered non-committally, nothing in his response betraying anything problematic.

In the past few weeks, I myself had been self-absorbed and busy. How long had it been since I'd really paid attention to my son?

Then it occurred to me that in the past few weeks, I myself had been self-absorbed and busy. How long had it been since I'd really paid attention to Eli? His irritability, which I'd kept out there on the fringes of my consciousness, had just seemed like a natural part of the normal wear and tear of daily life, as did his resistance to my: Wake up, it's late ... Tuck in your shirt ... Where'd you take off your shoes? ... Hurry up, you've got a dentist's appointment at five ... No, I can't read a story now.

Fifteen years ago, Rebbetzen Esther Siegel of Jerusalem once demonstrated the proper kind of hello befitting a soul entrusted to my hands. I had confessed that in my tiredness from a new baby's all-night crying, I didn't always give my oldest, then in daycare, an especially big welcome.

"Oi va voi la if you don't give her a big smile when she walks in!" the Rebbetzen had warned, shaking a finger at me menacingly. She glared at me intently. "I'll show you what to do!"

Then in her seventies, Rebbetzen Siegel jumped to her feet in her tiny Mea Shearim kitchen, threw open her arms, and flashed a wide, radiant, glorious smile to the imaginary child standing in her doorway. "You say this! 'Shalom shaynah maidele! I'm so happy you're home! How was school today?' "

ALL IT TAKES IS FOCUS

The image of the Rebbetzen appeared before me now, and I made a small adjustment in my perspective. I focused on Eli.

How is he? I asked myself when he came home from school the next day, and gave him a great, big attentive greeting. Whenever possible that afternoon, I reminded myself to say yes instead of an automatic no.

Whenever possible that afternoon, I reminded myself to say yes instead of an automatic no.

We mothers often feel put upon, and are careful not to give in to our children, for fear of being overwhelmed by their demands. But the result of saying yes more frequently was that his needs got easier to fulfill, rather than harder.

In the morning, I woke him up gently, taking care not to jab at him with my voice. When he asked me to look at his stamp collection (and it was no coincidence that it had been some time since it had occurred to him to ask) I recalled one of Rabbi Noach Orlowek's favorite sayings:

It was almost scary -- a matter of minutes, not days -- how fast Eli started turning into his sweet and happy self again. I say scary because the transformation demonstrated my amazing power as a mother for good or for ill. But it was wonderful, as well, to see how easy it is to gain access to that power. All you have to do is recognize that there's nothing in the world more important than the child standing right there before you, and no time more opportune than this moment, right now.

How to Help Your Child Succeed

Making the Most out of Bedtime

An Open Letter to Sarah Palin
Don’t Believe in Other Gods Versus God is One
Seeing Without Eyes
Why Shouldn’t We Eat Whatever We Want?
Comments
MOST POPULAR IN Family
Our privacy policy
Aish.com Is Looking for Great Writers