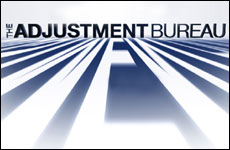 George Nolfi’s new film starring Matt Damon has me thinking about fate versus free will.

Does God have it in for you? Do you ever get stuck in traffic, lose your cell phone, or stand on a street corner with your arm up while cab after cab passes you by?

When inconveniences happen, we’re always told that they’re part of a higher plan. The Adjustment Bureau says this too; that every cup of coffee that spills on somebody, does so for a reason. God did it. And do you know why? So you wouldn’t get to the office on time and walk in on a bunch of angels brainwashing your friend.

The Adjustment Bureau’s job is to nudge things onto the basic plan of the universe.

The Adjustment Bureau introduces a company of some sort that controls the entire world. Mainly it focuses on one specific branch of the company, called The Adjustment Bureau, whose members wear grey hats and overcoats and look like they should be doing your taxes in the 1950s. Their job is to make adjustments -- to nudge things onto the basic plan of the universe. In other words, if you miss your bus or lose your cell phone signal, it’s because of them. They get around largely through secret doors that bend space, which allows for some exciting chase sequences. I half expected to see Sully from Monsters, Inc. come running out of one of the doors, followed by a giant panicking green eyeball.

The bureau is run by The Man Upstairs, and he is called that during the movie, although the movie specifically leaves it undefined whether this is an actual man who has a scary amount of noses in other people’s business, or whether it’s supposed to be the biblical Man Upstairs, in which case God lets way too much slip through the cracks. (Also, as I understand it, God doesn’t actually have people walking around doing his bidding in this way, and the ones who say they do are universally acknowledged to be crazy. When God wants you to spill coffee on yourself, he has someone bump into you by accident.)

One person who falls through the cracks is a young politician named David Norris, who, on the night that he loses his first senate race, meets a woman in the men’s room. He’s instantly smitten with her, and doesn’t even notice that she’s not wearing shoes, which, as any men’s room regular will tell you, is not a good idea. Nevertheless, she inspires him to give an honest, captivating concession speech that makes him likely to win the next election.

A month later, he meets her again, on a bus. He wasn’t supposed to be on that bus. He was scheduled to spill coffee on himself, go back home to change, and get to work late. But the agent in charge of making sure he spilled the coffee oversleeps, and instead accidentally makes him spill it on the girl, Elise, which leads to her giving David her phone number.

Subsequently, David gets to work on time and walks in on the Adjustment Bureau, which has frozen everyone else in the office so they could change one person’s mind about a business deal, although you’d think they should have just been able to sneak into his apartment in middle of the night and do the same thing. Also, they apparently don’t have anything like cell phones so that they can call each other and say things like, “Sorry, he got on the bus.” So the Bureau captures David, tells him who they are, and then says, “By the way, you know that girl you like? It’s not in the Grand Plan for you to see her anymore.”

Basically, they would kill each other’s ambition. It’s kind of like marriage.

Basically, they would kill each other’s ambition. It’s kind of like marriage.

So naturally, he spends the entire rest of the movie trying to get back together with her. He doesn’t care about the Plan; he wants his free will.

Free will is a big concept in Judaism, and not just because we like things that are free. God grants us bechirah, or freedom of choice, and based on our choices, we can eventually end up with reward or punishment in the afterlife. The only way to deserve one or the other is if we made conscious choices to good or bad.

But on the other hand, we also know that God has a Divine Plan, and that He knows how everything will turn out. He knows what you’re going to choose, and He can save you a seat in one place or the other. Although personally, I suspect there are no seats in Hell. I think you just wander up and down the aisles, bumping into people’s knees. “Oh, you’re saving that seat for your friend? Sorry, I didn’t see your coat.”

I will pause for a moment while you get some Advil.

But do the two really conflict? If you travel to the future and see what choices your friend will make today, does that eliminate his freedom of choice? After all, he has no option other than to do what you saw, right? But if you hadn’t gone to the future, then he would have a choice. But what changed for him? The fact that you looked behind the curtain?

On the other hand, God is not just a time-travelling observer. We Jews are people of the book, and God is our author. As an author myself (pat on the back), I find that I often struggle with that same question. I know that the bad guy will end up falling from great heights onto rotating helicopter blades. But do you ever read a book and say that the bad guy doesn’t deserve it, because the author is the one who made him choose evil? Not if it’s a believable character. If I’ve done a good enough job creating a three-dimensional character, I find that he will make the decisions on his own that get him from Point A to Point B, and all I can really do, if I want Point B to be helicopter blades, is either go back and revamp his personality to begin with, or present him only with choices that will result in him being somewhere higher than a helicopter.

We sit and watch horror movies and yell at the characters on the screen, “Don’t go into that room! He’s behind the door!” And guess what? The character goes into the room anyway, because he doesn’t know he’s in a horror movie. If he did, he would probably take Option C -- get out of the house.

We’re all characters in God’s movie. The only reason we know there’s a plan is because we know we’re in a movie. Once you realize you’re in a movie, you actually have more freedom of choice, not less.