The Dead End of Jewish Culture 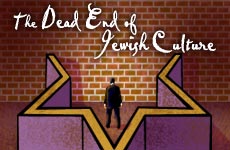 One-quarter of American Jews have rejected watered-down Judaism in favor of full-strength Christianity. Why?

One December afternoon, my precious four-year-old niece Jodi* walked into my mother's suburban New Jersey kitchen and asked, "Bubbie, are you Jewish?"

"Yes, I am," my mother answered proudly.

I laughed when my mother told me this story, and I chuckled every time I thought of it – for 22 years. Last week, Jodi got married, in a Catholic church, kneeling in front of a huge gilded cross. I stopped laughing.

Apparently, Jodi's perception of Judaism as a liability grew with the years. At the age of four, being Jewish made her a persona non grata to Santa Claus. At the age of 16, growing up in a town whose century-old bylaws stipulated, "No Jews or Negroes," Jewish identity must have been a social non-starter. At the age of twenty, as a sophomore at Boston University, being Jewish must have threatened her budding romance with a handsome Catholic senior.

But was there nothing on the asset side to balance Jodi's Jewish ledger? After all, her Bubbie and Zeydie were committed Jews. Her Zeydie was a life-trustee of his Conservative synagogue, an ardent check-writing Zionist, a lover of everything Jewish, from Mollie Picon to Bernard Malamud. Her Bubbie spoke Yiddish, made blintzes from scratch, and devoutly attended Friday night services every Shabbat. Was there nothing of nostalgia or Jewish tradition to stay Jodi's knees from kneeling before the cross?

Jews who defect to the religion of secularism are not a shanda, a disgrace. Why couldn't Jodi and Brian* have celebrated their nuptials in the neutral precincts of City Hall, or at the Botanical Gardens, or on horseback?

Obviously Brian felt strongly enough about his Catholicism to insist on a church wedding. Was his grandmother's mince pie more delectable than Jodi's Bubbie's knaidlach? Were their Christmas dinners more festive than our Pesach seders? Was his catechism class less boring than her Hebrew school? How were Brian's parents able to transmit to their son an allegiance to Catholicism which washed away Jodi's loyalty to her own Jewish heritage like a wave dissolving a sand castle on the beach?

Nearly 1.4 million American Jews say they are members of a non-Jewish religion.

The problem is not idiosyncratic to my family. According to the American Jewish Identity Survey 2001, out of approximately 5.5 million American adults who are either Jewish by religion or of Jewish parentage and/or upbringing, nearly 1.4 million say they are members of a non-Jewish religion.

We are not talking here about secularism, not about Jews who opt out of going to synagogue in favor of a baseball game or the movies, but rather in favor of church. Since the vast majority of American Jews are of Ashkenazic descent, this means that 25% of the descendants of European Jews who resisted the blandishments and threats of Christianity for some sixty generations, often at the cost of their lives, are now voluntary apostates.

American Jews have been occupied for four decades in a desperate attempt to stay the tide of assimilation and intermarriage (not to even speak of their more hideous confrere: conversion). I remember as a teenager in the early 1960s sitting through sermons where our rabbi pontificated on the various solutions to The Problem. Yet exactly what is the Jewish leadership trying to perpetuate? Jewish genes? Jewish culture? A fondness for kreplach and klezmer and Isaac Bashevis Singer?

If so, no wonder the Catholics are winning. They don't strive to inculcate in their children a love for Catholic culture. They don't try to whip up enthusiasm for the celebration of St. Patrick's Day nor spend millions to make sure that every Catholic child decorates an Easter egg. They are propagating a religion, complete with God and soul and afterlife. We are pushing a culture, complete with Sholem Aleichem and dreidels and lithographs of the Western Wall. But for a culture, no matter how engaging, no one is ready to sacrifice one's life – nor the love of one's life. Against Christianity we have pitted not Judaism, but Judaica.

History shows that substitutes for halachic Judaism have a shelf life of four generations or less. Reform Judaism's founder Moses Mendelssohn had nine grandchildren; eight of them were baptized as Christians. Zionist founder Theodore Herzl's children were not only not Zionists, they were not Jews. How many of the grandchildren of the great Yiddish writer I.L. Peretz married under a chupah? How many of his great-grandchildren know what a chupah is?

To perpetuate Jewish culture, outside of museums and university courses, at the very least you need Jews. But Jews, as all the population surveys prove, are rapidly disappearing. The first step in the multi-million-dollar enterprise of passing Jewish culture on to the next generation is to ensure that there will be a next generation.

During the decade and a half I lived in New England, my favorite hobby was horticulture. I particularly loved the arresting fragrance of gardenias; in early spring, I couldn't resist buying gardenia plants, laden with two or three beautiful white flowers and a dozen buds, usually offered for $3.95 at Woolworths. I would take my plant home, position it in a window with eastern exposure, water it copiously, and wait for the buds to open.

After one glorious, fragrant week, the open flowers would turn yellow and dry up, and the buds, reacting to the dryness in my heated house, would turn brown at their necks. I would labor to rescue them, misting the plant with a green plastic spray bottle every time I passed, a dozen times a day. One at a time, the buds would fall off. I would be left with a plant with shiny green leaves. After about six weeks, the leaves would start to turn yellow. I would run to the local nursery, buy iron granules, and scratch them desperately into the soil in the gardenia's pot.

In three months, the plant would be dead. Every time.

Not to be daunted, I invested in a small greenhouse, where the conditions would be optimum for growing gardenias. I also grew hibiscus and jasmine. I assiduously fed my plants with a solution of liquid fertilizer, meticulously regulated the temperature and humidity, and valiantly battled white fly and scale. Despite the gigantic expense of heating the greenhouse all through a snowy New England winter, I was proud of my yield: four or five hibiscus flowers a week and a couple dozen sprigs of jasmine in season. (The gardenias didn't bloom, but they didn't die either.)

About five years into my greenhouse enterprise, I took my first trip to southern California. There, in Laguna Beach, I saw hibiscus hedges eight feet tall, with solid masses of large red and pink flowers, and sprawling banks of white and yellow jasmine. To add to my envy, no one was lavishing care or expense on them. They were flourishing on their own, in their own natural environment.

"Jewish culture" is a greenhouse enterprise. At best, after all the energy and money is spent, it will produce a few prize specimens, like Cynthia Ozick and Giora Fiedman. But to really flourish, Jewish culture needs its natural environment: authentic Jewish life.

Authentic Jewish life is characterized by the study of Torah, the observance of Shabbat and Kashrut, and the thrice-daily worship of God. Not Shabbes leichter as museum pieces, but a generation of Jewish women who light their candles to usher in the holy Shabbat. Not klezmer concerts to evoke nostalgia for the shtetl, but Jewish bands playing Jewish music at Jewish weddings where Jewish communities are celebrating the beginning of a new generation of a Jewish family.

I wish my niece Jodi had had such a wedding.

The Pro-Palestinian's Real Agenda
What Makes Eli Run?
The Tyranny of Materialism
Science Enters the Mysterious Inner World of Consciousness
Comments
MOST POPULAR IN Israel
Our privacy policy