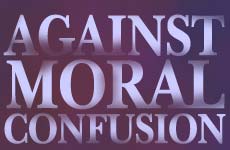 In the war against terror, our moral clarity is as indispensable as our Special Forces and our F-16s. Let us resolve not to lose it.

September 12, 2002 -- A year and a day later, it is striking how quickly the moral clarity that followed the attacks was beset by moral confusion.

Not everywhere, of course. This time around, The New York Times did not mark Sept. 11 with a celebration of terrorism -- as opposed to Sept. 11, 2001, when the front of the paper's Arts section featured an affectionate profile of former Weather Underground bomber Bill Ayers. "He still has the ebullient, ingratiating manner . . . that made him a charismatic figure in the radical student movement," reporter Dinitia Smith bubbled. These days, The Times takes a different view of terrorists.

But there are other voices -- elite voices, influential voices -- that still cannot quite bring themselves to condemn unreservedly the deliberate slaughter of civilians. To this day, the Reuters news service will not use the words "terror" or "terrorists" (except in quotations) when referring to the horror of September 11. "We all know," its global news editor has explained, " that one man's terrorist is another man's freedom fighter."

Such fastidious nonjudgmentalism does not reflect careful journalistic objectivity. It reflects a broken moral compass, and it leads to a debased judgmentalism of its own. Last week, Reuters transmitted a six-month-old photo of the attack site in Lower Manhattan, and described it with this grotesque caption:

"Recovery and debris removal work continues at the site of the World Trade Center known as 'ground zero' in New York... Human rights around the world have been a casualty of the US 'war on terror' since September 11."

It is hard to say which is more contemptible: The mocking quotation marks around "War on Terror" or the assertion that that war -- the chief effect of which so far has been the liberation of Afghanistan from the Taliban -- has harmed "human rights around the world." But that is where you end up if you begin from the premise that there is no moral difference between a freedom fighter and Osama bin Laden.

Americans reacted to the attacks last fall with a tremendous upwelling of patriotic feeling. Love of country, like the country's flag, was on display everywhere. And rightly so.

For most of us instinctively understood that the savagery of Sept. 11 was not the result of some injustice we had committed. It could not have been prevented by diplomacy. The hostility of bin Laden and his acolytes, and of the violent strain of fundamentalist Islam that produced them, was not an unintended byproduct of US foreign policy. Like the Nazis and the Communists, the jihadis despise us for what we are, not for what we do. We are the society that has extended more freedom, more tolerance, and more prosperity to more people than any other society in history. That is what they hate. And that is why the mushrooming of American flags last September was exactly the right symbolic response to their atrocity.

But not everyone thought so. "My daughter, who goes to Stuyvesant High School only blocks from the World Trade Center, thinks we should fly an American flag out our window," wrote Katha Pollitt in The Nation, a leading leftist journal. "Definitely not, I say: The flag stands for jingoism and vengeance and war."

Pollitt is hardly alone. On CNN the other night, Walter Cronkite avowed that US policy abroad "very definitely... could have caused" the massacres in New York, Washington, and Pennsylvania. The organizers of a 9/11 tribute at the University of California at Berkeley planned to exclude "The Star Spangled Banner" and "God Bless America" as "too patriotic... too centered on nationalism." (Under the pressure of nationwide ridicule, campus officials eventually relented.)

There is little point debating the Pollitts and the Cronkites and the Berkeley organizers and all those who thought that the important question after Sept. 11 was "Why do they hate us?" There are people for whom it is an article of faith that America is always guilty, and if their minds weren't changed when theocratic fascists sent 3,000 innocents to their deaths, their minds will never be changed.

Our enemies are the people who publicly implore Allah to "destroy the usurper Jews and the vile Christians."

But the rest of us must be able to see through their moral fog and remain clear on why and with whom we are at war. Our enemies are the totalitarians who plunged Afghanistan into the Stone Age and who yearn to do the same to America. They are the people who want to stone that young mother in Nigeria, who ordered a Pakistani woman gang-raped as a point of "honor," who drove those Saudi girls back into a burning building because their heads were uncovered.

They are the kind of people who smash ancient statues to prove their piety, who fill the madrassas with poison, who publicly implore Allah to "destroy the usurper Jews and the vile Christians." The kind of people who can shatter buildings but not build them. Who can crush life but not enrich it.

In the war to destroy these people and their evil ideology, our moral clarity is as indispensable as our Special Forces and our F-16s. Let us resolve not to lose it.

Civil Disobedience: Baltimore and the Bible

How Two Ordinary Teenagers are Changing the World
Why Are The Prayers Of Yom Kipur So Repetetive?
Ha'azinu 5783: A Time for Unity!
Twisted Thinking
Comments