Safe in the City 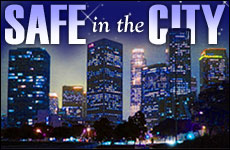 I wanted an evening filled with the magic experience of Sukkot, but I was getting in the way.

I'm walking as fast as I can now, as close to running as possible without actually running, to get home before my friend Ciema gets to my house and finds me not there. It is almost Shabbos, on the afternoon of the second day of Sukkot, and I have promised to meet her at my house between 6:30 and 7:00 p.m. to walk together to a neighbor's sukkah for dinner. I'm late, and now I'm running to catch up, but I know I can't walk, can't run, can't fly fast enough to get there by 6:30, not even by 7:00, and my mind is racing over what will happen when she arrives and I'm not there.

I'm feeling anxious, because I can't call her or page her or leave her a message -- on Sukkot all these weekday communications are left behind. I can't smooth over my being so inexcusably late, and I can't influence or control her reaction when she arrives to find the house empty and no clue as to my whereabouts. I'm regretting that I never gave her either the name or the address of where we're going -- so she can't just navigate herself. I left her entirely dependent on me for this evening -- and I'm letting her down.

I know the route she'll take if she is driving away from my house in despair of finding me -- it's out of my way now, it makes my walk longer and more time-consuming, but I want to be able to flag down her car as she drives away. As I get closer to my house, I walk in the middle of the street, so she can't miss me on the sidewalk in her peripheral vision.

I wanted to show her the beauty and other-worldliness of the "sukkah lifestyle," where we abandon the material protection of our homes and experience God's protection.

My friend is not Jewish, but when she made a comment to me last week, I had decided that I wanted to share the joy of Sukkot with her anyway. "Isn't this the holiday where everyone eats in little huts?" she had asked me as we took turns rolling paint onto my dining room walls. I wanted to show her the beauty and simplicity, the other-worldliness of the "sukkah lifestyle," where we abandon the material protection of our homes and demonstrate -- and experience -- God's protection and our faith in it.

I wanted her to see this most beautiful season, in hopes that she would gain a greater understanding of why, in the middle of Los Angeles, and in the middle of a busy professional life, I've chosen to live the way Jews have lived for 2,000 years, in a neighborhood which is now so beautifully filled with open-sided huts. I had high hopes for this evening, when she would decompress from her work life and join us in the sukkah. I had made arrangements for everything -- except being 45 minutes late and leaving her standing there with no instructions as the sun went down.

I hate being late, so I'm psychologically grinding my teeth as I walk. I grew up in a household where being late was considered a sign of disrespect to the person waiting. I'm reviewing our friendship of 10 years, and hoping that she won't be angry, hoping that she will forgive me.

As I walk up the street, I see her car parked in front of my house, and I am optimistic that somehow she decided to wait endlessly. I arrive at the house at 7:15, and, assuming that she is there, I open the door with a shout of "hooray" and I begin loudly apologizing and expressing my apologies. But there is only a note.

"Dear Diane, I guess I got the time wrong. I hope I'll see you again after the holiday is over."

Now I'm confused, and sad -- but not completely dismayed. She obviously got tired of waiting, but why is her car still here and she is not?? My agitation continues as I walk in and out the front door again and again, looking into her car (is she relaxing in it? No...) and searching my backyard (is she in the hammock? No...). I'm completely befuddled, I'm hot and sweaty, and I'm now also late for dinner!

And here, walking up the street toward me, is my host. "Ciema's at our house," he says calmly, "and we're ready to start." Astonished, I grab a jacket for the evening and head off with him.

In the sukkah, Ciema tells an incredible story. "I thought I was late," she explains, "because I arrived about 6:35, so I figured you had left without me." She had been snooping around the side gate and into the yard when a man walked by with his children and had noticed the snooping and decided to stop and ask questions. "Who are you?" he asked her.

In Los Angeles, a strange man wandering down the street at dusk is not automatically your closest friend, but she decided to take a chance with him. "I'm supposed to have met Diane Faber at 6:30 to have dinner in a sukkah," she responded, "but I was late and I think she must have left without me."

"Whose sukkah were you going to?" he asked.

"I don't know," she said, "we were supposed to meet here and walk together."

Now this may seem like a strange suggestion -- people don't usually go to the rabbi to find out someone's dinner plans -- but Ciema felt okay with that because several years before, she had met my rabbi at a gathering at my home. "So," she thought, "I don't mind speaking with him again anyhow, even if it doesn't lead anywhere." And off they headed to the rabbi's house.

They never got to the rabbi's house. Along the way, they passed many other people heading off to their sukkahs. Ciema described that her new friend wished each passing pedestrian a "good Shabbos," and then asked if they "happen to know where Diane Faber is having dinner tonight." As they wandered along, various passersby had various ideas, and the group meandered and grew as people joined in the project of figuring out where the missing hostess was supposed to be eating.

At some point, they met someone who said, "I think Diane is having dinner at the Magady's." And then they all walked her there -- the man, his children, and a menagerie of people they had met on the street. Ciema arrived, in the dark, with an escort of strangers, perfectly on time for dinner in the sukkah.

I've never had such a peaceful, magical experience in Los Angeles in my entire life.

"It was incredible," Ciema told me. "Here I was, in the sprawling metropolis of LA, in a neighborhood I don't know, a woman, alone, in the dark, not knowing where I was supposed to be going -- no name, no address. And along comes a complete stranger, a man, and he takes my problem and makes it his, and he involves more people in this kindness project until they get me there. I've never had such a peaceful, magical experience in Los Angeles in my entire life. I felt completely guided and protected."

She added, "Now I understand why you live here. It's like a village, in the heart of the city."

I had wanted her to feel this -- but I hadn't trusted God to make it happen. I had worried, and speedwalked, and sweated all the way home, thinking that if I wasn't there to "make it happen," the evening would be a huge bust, a missed opportunity, a disconnect. I thought I was the critical element which made all of this possible. And in the most generous way, God reminded me that I wasn't, and I'm not.

God sent the man on the street, and having his children made him seem less threatening. And his plan, going to the rabbi's house, did not ultimately solve the problem, but it was probably the only suggestion that Ciema would have felt safe with, having met the rabbi two years before. And the route they took led them to one person who knew where I was supposed to be. (To this day I haven't figured out who that was!)

When I finally made it to the sukkah, hot, sweaty and amazed, I was stunned to find Ciema relaxing with my hosts and friends, completely at peace. Only my level of agitation was out of place. "Come sit down," they said, "and join us."

The Iranian Cloud
Bechukotai 5782: Divine Retribution
Behar 5782: Working to Live or Living to Work?
The Wholeness of Being Broken
Comments
MOST POPULAR IN Jewish Society
Our privacy policy