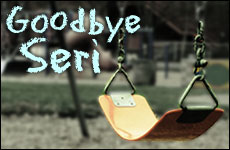 People ask me how a life that ends at the age of six can possibly have meaning. Now I have an answer.

You did not really know me. But I knew you. I am the father of your sister's best friend. For over a year, since your original diagnosis, a lot of people that you hardly knew really, really wanted you to get better. We davened every day for you, mentioning you in the part of the shemonah esrei (prayers) where we ask God to cure the sick. We said Tehillim (Psalms), hoping as hard as we could that God would make you better.

While I spend most of my time being a doctor, I spend a lot of time thinking about how Judaism looks at life. I think about why people get sick and wonder what the Almighty wants us to do about all kinds of questions that come up in medicine. Grown ups call it medical ethics, but it is really nothing more than learning what the Torah has to say about medical problems that people have. It is not so different from the Torah your teacher was teaching your class before you became too sick to go to school.

I also spend time wondering what God is trying to tell us when people get sick. I particularly wonder how He wants us to understand when a five-year-old has to spend her days at the hospital instead of spending time on the playground with her kindergarten friends. People ask me how a life that ends at the age of six can possibly have meaning. I understand why they ask the question and I wonder if you also asked that question during the past year. You may not have understood what was happening, but the rest of us did.

And because we understood what was happening, we changed our lives. You were too little to know that people unfortunately get sick all the time, and sometimes they die. And we are very sad when that happens, but we usually don't do much about it. We mention them in our prayers and we add them to our mishaberach lists (the list of sick people who we specially mention in shul when we read from the Torah). We hope that they get better, but if they don't, we are sad and we move on.

The value of a life is not measured in years, but in the impact it has on others.

But when we found out that you were ill, our whole community changed, both the men and the women. We added Tehillim groups to say Psalms for your recovery. We learned Torah in your merit. We added special classes on lashon hara (the laws of gossip), hoping that if we became better people, maybe you would get better. I do not think you could have understood how hard it is to convince grown ups not to gossip or say mean things about people for just two hours each day, but people thought that it would be worth it if it might help you get better.

We realized that God was sending us a message, so we all starting doing extra mitzvot (commandments), all as a merit for you to get better. As you became sicker, we tried harder. We increased our chesed (acts of kindness), dedicated ourselves more to bikur cholim (visiting the sick), and gave more tzedakah (charity).

In the end, there will be some who will say that all of the extra mitzvot that were done for your sake did not help at all. They will think that it just shows that God did not care. But those of us who lived through the last year knowing how sick you were know better. We know the real answer to the question of how a life of only six years can have meaning.

A rabbi once told me that the value of a particular life might not be apparent to the one who is living that life. There are people who are so sick that they do not know what is happening around them, like what happened to you near the end of your short life. And the rabbi told me that people would say that such a life has no value since the sick person cannot appreciate it. But he also told me that the real value of that life might be in the impact that it has on the people around it. He told me that the increased number of mitzvot done by the people around the sick person may not always be apparent to us, and that we will never know the impact the ill person has had on others.

But that rabbi was not completely right. Now that your life is over, I can see the impact that your life had on others. I do not think that the shul would have cancelled a big event for just anyone's funeral. But who would have shown up at the shul instead of at your funeral anyway? How could all of those hours of Tehillim, learning Torah, and guarding our tongues not leave a permanent, lasting impact on each of us and on our community? Unifying a Jewish community is no easy trick.

So I guess that from now on, when people ask me how any life, even one that is cut tragically short, can possibly have meaning, I will have an answer. The value of a life is not measured in years, but in the impact it has on others. If the accomplishment of a person's purpose in life is calculated by how many individuals it helped to make into better people, then there is only one conclusion to be drawn. Some people live a long time, but don't accomplish much, and some people accomplish a whole life in six years.

Love,
The father of your sister's best friend

Serach Dina bas Sholom Dovid died at the age of six on May 21, 2005, after her year-long battle with cancer. If you would like to contribute to a scholarship fund established in memory of Seri, please email Dr. Eisenberg at eisenber@pol.net.

Burying Six Unidentified Holocaust Victims
For Every Individual, A Torah Scroll
Allegiance To The Monarch
Meet the Real You: Yom Kippur
Comments
MOST POPULAR IN Israel
Our privacy policy
Aish.com Is Looking for Great Writers