In the Light of the Bereaved 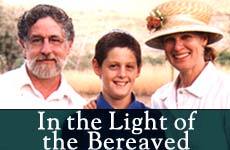 Seth and Sherri Mandell's remarkable mission to Asia brought a profound message of peace and hope amidst the darkness.

January 5, 2002 (Hong Kong): It was a week in which our souls were bathed in gentle words of kindness and humility.

It was a week in which we were shrouded in the sanctity of life, our thoughts filled with visions of peace, and our aspirations united with the destiny of the Jewish nation.

It was a week in which Seth and Sherri Mandell accepted our invitation to visit Asia from Israel, at a time when a series of multiple suicide bombings in mid-December had devastated so much human life and along with it eroded our faith in humanity's base goodness.

They came into Hong Kong with a potent message for the living that, paradoxically, only they and other parents of children murdered by terrorists are able to share.

Their thirteen-year-old son, Koby, and his fourteen-year-old schoolmate, Yosef Ishran, had been murdered in the ancient caves of biblical Tekoa just seven months earlier.

In the process of their trip, though, they affected more lives in those brief seven days than most of us will ever touch throughout our lifetimes.

On the second day of Shiva," Seth noted, "Sherri asked me, 'How can we carry on? I don't think I can do it.' I told her we have three beautiful surviving children and in both their names and Koby's we will bring goodness into the world and focus on our own self-improvement. Ironically more goodness will come from this tragedy than we would have ever been able to share while our son was living."

The region had never heard a message like this from a Jew before, ever. Many were moved and elevated by the Mandells as if they had truly met members of the Jewish people, dispensing life unto the nations.

Koby's murder unleashed an emotional attachment to the Almighty that previously was lacking.

And the affirmation of life is what we had all been gasping for in an effort to regain the totality of our humanity. Joined by their three children, they imparted a message of eternal peace, one predicated on the unshakeable hope in humanity's pursuit of goodness and on the evolving relationship they have experienced with God and Torah.

"Our faith with God was a highly cerebral one, almost entirely founded on the intellect. Koby's murder unleashed an emotional attachment to the Almighty that previously was lacking. It has taken our faith to a more elevated level and higher connection to the Almighty, in essence fusing the intellectual and emotional," Seth added.

During the past fourteen months, though, violence in the Middle East has resulted in an unprecedented level of despair, taking its toll on Jew and Gentile alike.

Yet the Mandell's, a family who has suffered so profoundly, have chosen otherwise. They infuse all with a critical sense of self-awareness that each and every life must be acknowledged, must be coveted, and must be honored.

"Our son was a wonderful child. He was no one's enemy. He liked hiking. He was a passionate baseball and basketball fan. He engrossed himself in Talmud and was a serious fan of Reb Shlomo Carlebach," noted Seth.

"But one remarkable aspect of his death was how much we learned about his character from his classmates that we previously never even knew. He had a strong conviction and a relentless commitment to help the underdog. Whether it was a classmate who wasn't a good volleyball player or a member of his baseball team that needed assistance -- Koby was always there to help."

This desire for near total detachment from the pain of others is perhaps one of the most asphyxiating and contradictory aspects of the conflict, unwittingly striking out against the core of Judaism.

The Mandell's trip therefore stood as a further wake up call for all of us to rethink our priorities and to dismantle ingrained self-defensive barriers.

It was as if Seth and Sherri were pleading with us:

"Dear fellow Jew, arise. Awaken from your anguish! We have seen the other side -- the darkest side man can ever see -- and confronted it face-to-face under the most devastating and dehumanizing of circumstances. Yet through an intense faith in God, a love of Torah, and an unrelenting belief in prospects of goodness of mankind, we have prevailed."

Sherri Mandell did speak of the pain she feels for those who educate their children to honor their fathers and mothers through the "ultimate glorification of death," a grotesque form of murder euphemistically called martyrdom.

"I have such complex feelings of sadness for a society that rejoices in the killing of innocent beings, applauds death, and encourages their youth to murder and withhold all mercy in the name of their Maker. Just as they did to my son. Someone must reach out to these women and rekindle that distinctive essence of what makes a mother , that being the desire to do everything and anything to protect the life of one's son or daughter."

Those who brutally murdered our son Koby are not worthy of our thoughts.

"When I meet with other mothers in gatherings of the bereaved in Israel we don't talk about the killers of our children. Those who brutally murdered our son Koby are not worthy of our thoughts. But what I do share, intimately, are my feelings of pain having lost a child, of the sadness I feel from no longer being able to experience life with my eldest son, and of the emptiness and deprivation that one undergoes when being afflicted with the most intense horror that can befall a parent," Sheri imparted.

They believe in their own God-given humanity, one that is guided by spiritual and intellectual forces declaring that vengeance play no role in their response to terror.

On this issue Sherri noted that, "I have no desire for revenge. This is God's domain, not mine. Our family has tried to channel our energy productively. Our response to those who have chosen to dehumanize our son has been to start a the foundation in my son's name to assist siblings of terror victims, write a book about Koby's death and its spiritual implications, and reach out to the media to share our experiences."

And their deeds of decency were documented in dramatic and high profile fashion while here in Hong Kong.

They conducted eleven interviews in every major Chinese and English newspaper, penetrated one hundred million homes through their appearance on Star Television's main Asia-wide news program, aired their views on the leading radio program, met with school children to talk about their daily lives in the land of Israel, and spoke with over 200 members of our community about Koby leaving not a soul untouched. Profound humility and honesty dignified each occasion.

During one of the most dramatic interactions they had with the media, a Chinese reporter of a leading newspaper apologized at the outset of his interview for potentially asking questions that would sadden them. Mr. and Mrs. Mandell sat there in a moment of silence, a moment where the divide between those who have suffered and those who haven't was deafening.

"There is nothing you could ever ask which could further sadden us," stated Sherri. "For we now live in a state of perpetual sadness, from morning to evening, each and every day of our lives." This reporter was visibly jolted and brought to tears by the wrenching reality of her words.

The healing process is clearly a life-long process, not a finite experience which can be overcome with time.

Waking up each day as a family of five instead of six forever reinforces that their pain will never scar, but remain an open wound for eternity. Each Shabbat since their firstborn's murder and for every future Shabbat in their own lifetimes, the Mandells will continue to light six candles in accordance with Jewish law, four of which acknowledge the birth of each of their four children, even though one has been prematurely taken away.

"The healing process is clearly a life-long process, not a finite experience which can be overcome with time. We recognize that it is a process and not a destination. Perhaps this is the precise power of healing, one which we are thankful for, as it will ensure that our son's memory will be preserved in the holiest of fashions as long as we live," commented Seth.

By sharing with others about the inner decency of life, about the purity one can achieve in this world in the face of tragedy, about choosing good over evil, life over death -- choices of biblical proportions -- the Mandells have been able to both elevate their own lives and those of others.

We stood in awe of their courage, their love of Koby and their three surviving children, their commitment to the ideals of the Jewish nation, and their desire to actively contribute to kedushah, holiness.

Sherri and Seth will tell you that their driving force is the spiritual essence of their son, Koby, and that he is responsible for any goodness that results. This can best be seen, they say, in their founding the Koby Mandell Foundation to aid siblings of terror victims and provide a network of support for grieving mothers.

It is also the remarkable essence of their own identities, ones that have chosen peace as their response to the evil thrust upon their son and their family.

The Mandell's chose to involve us in their lives at a time of overwhelming despair and awaken us from our stoic and insensitive state of being.

And it is this very point that has captured us all: For though they remain in the throes of death's woes, they are astonishingly the most alive members of the human race we have ever met.

Steven M. Feuerstein is the director of the Center for Peace in the Middle East in Hong Kong.

A Gift from the Coast of Nowhere

The Odd Couple
The Blue Beyond
Great Place to Live
Is Eating Supposed To Be Spiritual?
Comments
MOST POPULAR IN Spirituality
Our privacy policy