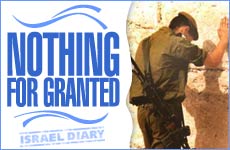 Yom Ha'atzmaut marks the moment when Israel burst into being. More than ever, it's nothing to be taken for granted.

Israeli celebrations of Yom Ha’atzmaut usually involve a whole lot of hoopla -- barbecues, noisemakers, outdoor concerts – in which the message of the day is sometimes drowned. Not so this year.

“Am I mistaken,” I asked a friend, a 50-something sabra whose son is an Israeli air force pilot, “or is the excitement that usually leads up to the holiday muted this year, if not entirely absent?”

He looked at me as if I am a bit thick.

“Of course it is. We’re practically at war,” he said, exasperated with my American naiveté.

Yom Ha’atzmaut marks the crucial point at which the modern state of Israel came into existence. Prior to that moment, it was a political non-entity. After, it came to life, with an army and a culture and a people hungry for her.

In just half a century, her economy has reached that of countries many times her size and five times her age. She has become a flourishing center of Jewish learning, with yeshivot filling blocks alongside high-tech firms, but the struggle for her nationhood has been constant and ongoing.

Gone now are the days of declared, simple-faced war. Gone too are the days of full-on economic boycotts and tremendous fiscal hardship. Last year’s more esoteric threat – Post-Zionism, the home-grown philosophy that proclaims the irrelevance of the Jewish essence of the Jewish state, has been rendered irrelevant for the time being -- by the corporeal brute threat posed by the guerilla war being waged on Israel and her citizens.

After seven months of this, more than ever, Yom Ha’Atzmaut is more than a political commemoration. It is a guttural cry: “Am Yisrael Chai.” The Jewish people live!

In this Jewish country, holidays begin at nightfall. With perfect, poignant logic, Yom Ha’Atzmaut begins as the stars come out, as Yom HaZikkaron, Israeli Memorial Day, marked the 24 hours prior, bleeds into dusky memory. Without one, there wouldn’t be the other.

More than 20,000 men and women have perished fighting Israel’s enemies.

When I first came here three years ago, it was jarring to pass young men and women standing on street corners, scanning crowds and holding rifles. At their age, I was in college, nourishing my mind and leisurely deciding who I wanted to be. They don’t have that luxury. I always felt a wave of gratitude when I passed them. Now, my thoughts flash from them to the ones serving in Gaza, in Judea and Samaria, on the Lebanese border. They’re all under fire, but some are in more constant danger.

In this country of just a few million people, more than 20,000 men and women have perished fighting Israel’s enemies. With the exception of newcomers like me, almost everyone knows someone, loved someone, who died for the Jewish homeland.

Tens of thousands more bear wounds on their bodies, and the entire nation carries the emotional scars of a life spent under fire. The last seven months weigh on the nation. Every day, we listen anxiously to the news, compulsively check the Internet... another day and no one was hurt? No soldiers ambushed? No babies shot in the head? No toddlers felled by mortar fire?

Thank God, we sigh with relief, and continue on with our day.

Last year, before all this started, I wanted to be at the Western Wall for the melancholy ceremony that began Yom HaZikkaron. Thousands of Israelis gather in the plaza to share collective grief, as the nation’s leaders try to find words to describe the nation’s pain.

That night, I arrived at the Old City without enough time to make it to the Wall for the memorial siren, sounded throughout the entire country for one or two minutes. I ran through the Arab shouk recklessly, my feet flying over the centuries-old steps, hoping that when that siren went off, I would be with Jews, with family.

I turned the corner to the L-shaped corridor leading to the Wall, and just then the slow, steady whine of the siren filled my ears. I froze.

In front of me was a triptych of soldiers, three young men with guns.

These men — boys — looked so tough, so brave, and so young. In the ly stoic Israeli way, they stared straight ahead, acknowledging neither each other nor me.

What have they seen, I wondered? Are they mourning an uncle who never made it to 30? A friend blown up by Hezbollah weeks ago? Or are they thinking of themselves, asking God to ensure no one need mourn them?

The siren stopped and I moved forward. As I passed by, I saw a line shining where a tear had slid down one’s face.

When the siren went off the next day, I was standing at a busy corner downtown. There were no soldiers visible here, just traffic and crowds of shoppers and storekeepers, tourists and the schnorrers who hit them up for money.

The world stopped. Traffic stilled. People got out of their cars. Shoppers put down their bags. No one moved.

There is intimacy in this, I thought, noticing a woman wearing the head covering of a particular Chasidic sect. She was rocking slightly, probably reciting psalms, next to a guy who looked like he might have fronted for the Sex Pistols. My eye caught movement between them and I watched, in the distance, a couple making their way up the road.

It was an Arab man, followed by a woman I assume was his mother. Their very movement seemed perverse. I wondered what was going through their minds. Faces as inscrutable as the soldiers’, they held their heads up high, and no one turned to look at them, each frozen individual lost in his own thoughts, her own losses.

The siren stopped its wail and people got back in their cars. The radio DJ announced that it was 11:02, and life went on.

The hills whispered: “Am Yisrael Chai.”

That night, when memory bled into independence, I watched army-aged men drape themselves in the Israeli flag and dance exultantly through the streets of my neighborhood. “Hoshi’ah et amecha, uvarech et nachalatecha, ur’aym v’nasaym ad haolam,” they sang. “Save Your people and bless Your possession, tend them, and sustain them forever.”

The next morning, I joined what seemed to be most of the country hiking through Israel’s hills and valleys. The hills whispered: “Am Yisrael Chai.”

By last year’s count, 20,703 people had died for Israel. Since then, some 80 more lives were sacrificed for the Jewish state. As I compulsively check the Internet to see where mortars have fallen, and where Israeli tanks have gone, I realize that Independence is ongoing.

And to whose voices were silenced, I think, “Ani zocheret,” I remember.