54 Ways You Can Help Israel 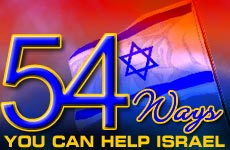 Incredible ideas for how to help Israel at this crucial time.

For many around the world, one of the most frustrating aspects of the violence in Israel is the seeming inability to help – even in some small way. And while we may not be able to stop the rocket attacks, we can still take action to lift Israel's spirits and help it contend with an increasingly uncertain situation.

Even if our actions do not appear to influence the overall outcome of events, at the very least we succeed in changing ourselves. And that, in and of itself, is an important victory.

Here we present "54 Ways You Can Help Israel" – in no particular order. Thank you to the many Aish.com readers who submitted ideas.

To Restore Our Destiny
The Promise Of The Land
Which Chat Are You On?: Parshas Behar/Lag Ba’Omer
Do You Like Slow-Cooked Food? Thank the Jews
Comments
MOST POPULAR IN Jewish Society
Our privacy policy