Get Me To The Church On Time 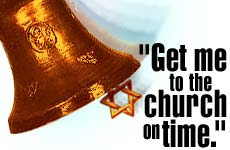 Choosing to marry someone who shares the defining values of your life is not racist.

So intermarriage is no longer a problem. In little more than one generation, American Jewry has moved from staunch opposition to uncomfortable acceptance to something bordering on celebration.

Allan Smith, director of the Youth Division of the Union of American Hebrew Congregations (Reform), gave succinct expression to this ethos: "Young people see no connection between marriage and their own sense of being Jewish. I think it's unrealistic to expect our young people to reject the environment in which they've grown up -- one that places such a high value on inclusiveness and tolerance."

In short, we have nothing to tell our children to convince them not to intermarry.

Disappearance will be the inevitable result of the current intermarriage rate.

The most shocking statistic in the AJCommittee survey was that half those polled consider opposition to intermarriage "racist." Judaism itself, as well as every one of our ancestors, is thereby tarred with the brush of racism in the eyes of half of American Jewry.

Still, those who equate opposition to intermarriage with racism have a point. Consider the nature of the Judaism to which most American Jews are exposed. At the recent General Assembly of Jewish Federations in Chicago, Rabbi Tirza Firestone described the Christmas tree in her house. To honor the memory of the non-Jewish mother of her stepsons, aged 25 and 27, she finds it important to invite them to her house to celebrate Christmas.

Not surprisingly, differences of "theology" rarely pose problems for Rabbi Firestone's intermarried congregants since, as far as they know, Judaism has no theology.

Another GA "expert" on intermarriage, Rabbi Kerry Olitzky, stressed the importance of recognizing that there is "no right way and wrong way to be Jewish." He would replace the old religion of Law by a contentless dispensation.

If Judaism espouses no rights and wrongs, it admittedly makes no sense to search for marriage partners only among those who share the same null set of beliefs. Rather, turn toward those who share one's politics, or taste in movies. The only possible excuse for doing so is some kind of worship of gene pools. And that is racist.

Must then we resign ourselves to the role of helpless bystanders at the disappearance of American Jewry? For make no mistake, disappearance will be the inevitable result of the current intermarriage rate.

And being raised in a one-Jewish-parent home virtually guarantees the child's loss to the Jewish community.

There is, however, a way to stop intermarriage: Take Judaism seriously.

Even the warm embrace of intermarried couples by the Reform movement has done nothing to stem the hemorrhaging due to intermarriage. So great is the number of non-Jews within Reform that Reform historian Dr. Michael Meyer warns of a movement so syncretized with Christian elements that conversion of the non-Jewish spouses is beside the point.

There is, however, a way to stop intermarriage: Take Judaism seriously.

Any serious effort must start with recognition that campaigns focused on preventing intermarriage have no hope. If being Jewish does not play a central role in a young Jew's life, by the time he or she reaches marriageable age, nothing can be said to dissuade them. If Jews have no mission, if being born Jewish is not seen as the greatest privilege, then we might as well all become Episcopalians and call it a day.

The Orthodox community, whose children almost never intermarry, provides the successful model. For those raised with deep Jewish knowledge and a sense of national mission, the issue of intermarriage does not arise.

That mission requires building a home in which Torah values are paramount as is transmitting those values to succeeding generations. That can only be done with a spouse committed to the same values. By definition that spouse must be a fellow Jew, whether by birth or by conversion through acceptance of the Torah's commands as binding. In the latter case, the convert's race or ancestry is irrelevant; only the commitment counts.

Choosing to marry someone who shares the defining values of your life is not racist.

4 Reasons to Join a Synagogue this Year

Jews Changing Their Surname at Ellis Island
Why My Iranian Mother Didn’t Want Me to Become a Religious Fanatic
The Jewish History of Prague
Why the Sexual Revolution was Bad for Women
Comments
MOST POPULAR IN Israel
Our privacy policy
Aish.com Is Looking for Great Writers