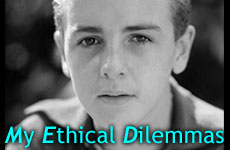 Think it's easy for a 15-year-old to work in a store? Think again.

I’m 15. When I’m not in school, I work in a Judaica store and I have been confronted with some pretty difficult ethical choices there.

One day, for example, I was the only employee in the store and business was slow. A close friend from high school came in. We chatted, and then he brought over to the register a book he wanted and asked for a discount.

I hesitated. He was a good friend and I had seen other employees give discounts, so I took 10% off the price. After he left I wondered if I were guilty of stealing from the owner of the store.

I’m a good employee. The owner trusts me and leaves the store in my care. Perhaps he would accept my using my own judgment to give a discount. On the other hand, I wasn’t sure, and I was embarrassed to ask. If I asked and he said "no," I’d have to pay the difference myself and I needed the money. I was also afraid he wouldn’t trust me anymore. Did I do the right thing?

On another occasion I was again alone in the store, this time on Friday afternoon shortly before Shabbat. There were no customers and I decided to close early and get home. (Even this was a decision I wondered about. I didn’t really have permission to close early.)

At the last moment a woman rushed in looking for a gift to bring to her Shabbat host, and asked for our "cheapest candlesticks." The computer said the cheapest set we had in stock was $40. She seemed upset that it was so expensive, but she paid and left. I locked the door and turned off the light, but as I was leaving I saw we had cheaper candlesticks than the ones I had just sold.

I thought about chasing after my customer and trading the candlesticks for the cheaper pair. But the hour was late, I was tired, and I wanted to go home for Shabbat, so I didn’t bother. I didn’t feel great, but I hadn’t intentionally sold her something more expensive than what she wanted. And she had known the price and decided to pay.

This week a man walked in looking for a Bat Mitzvah gift. He picked up a ceramic jewelry box, and examined it carefully. Then he brought it to me to gift-wrap. As I wrapped it I noticed it was cracked. The scratch wasn’t hard to see, and I knew he had looked at it carefully. Perhaps he didn’t care. I wrapped it, charged him, and he paid.

My mother told me to ask a rabbi. After much thought, I decided to go to the closest one -- my father.

I told my mother these stories and asked her whether she thought I’d done the right thing. She told me to ask a rabbi. Now where I live, there are a lot of rabbis, so I wasn’t sure which one to ask. But after much thought, I decided to go to the closest one -- my father.

My father told me he didn’t think there was any issue with the woman who bought the candlesticks. When I said the cheapest candlesticks in the store were $40, I was giving her the best information I had. There was no intent to deceive on my part, and the price the woman paid was the correct price for what she bought.

On the other hand, he told me, I’d find the case of the questionable discount in Maimonides' codification of Jewish Law, under the section "Laws of Agents," and the cracked jewelry box case discussed in the "Laws of Sales." So I went and looked them up.

Maimonides says that agents cannot give discounts without permission from their employer. Otherwise they violate the terms of their employment -- which means they’re effectively not working as an employee at that time. So I was wrong on that one. (I subsequently asked the owner of the store and he told me in the future I could give discounts at my discretion.)

Maimonides discusses my cracked jewelry box case in a section on "false sales." When people buy things, he says, they assume the article they’re buying is whole and unbroken. This assumption holds even if it seems that they have examined the article and have seen its faults, unless they verbally state that they have seen the blemish and are accepting it anyway. Otherwise, it’s a sale made under false pretenses.

So I was one for three. Sort of a C. Math is hard, and science is difficult, but I think running even a small store in an ethical manner may be hardest of all.

If your father isn't a rabbi, you can get answers to your ethical dilemmas at aish.com's Jewish Ethicist.

The Jewish Ethicist - Stereotypes and Prejudices

The Jewish Ethicist: Socially Responsible Investments
Grilled Israeli Lamb and Veggie Kabobs Recipe
How To Barbecue Like an Israeli
Pain is a Reality; Suffering is a Choice
Comments
MOST POPULAR IN Current Issues
Our privacy policy