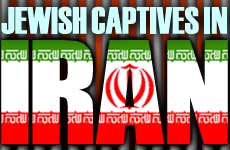 Thirteen Jews held captive in Iran are threatened with capital punishment for spying.

Update: April 25, 2003: Iran has freed the last five Iranian Jews imprisoned for espionage three years ago, Foreign Minister Kamal Kharrazi announced at a press conference. The defendants had been convicted of cooperating with a hostile government, membership in an illegal spy ring and recruitment of new agents.

One year ago in Iran, a group of 13 Jews – including a rabbi, Jewish community leaders and a teenager – were charged with "spying for the Zionist regime."

In the past few weeks, eight of the 13 Jews have confessed to being trained and paid by Israel to gather secrets in Iran. The first confession was broadcast on Iranian television as the lead story of the main nightly newscast. "I have been accused of espionage for Israel," Dani Tefilin said. "I do accept this charge. I have been spying for Israel. In my trip to Israel in 1994, I was trained for my activity in Iran."

Defense lawyers claim that the material was not classified and of no use to Israel, and thus the suspects are not guilty of the capital offense of espionage.

Israel has denied that any of the defendants were its spies.

The case has alarmed Jewish groups and Western governments, fearful the defendants will not receive a fair trial. Since the 1979 Islamic Revolution, Iran has routinely arrested innocent Jews on the pretense of spying for Israel and the United States. At least 17 Jews have been executed without the fundamental right of a trial, including two Jews who were hanged in Tehran in 1997 on similar spy charges.

"If the accused are executed, I would expect to see ambassadors recalled from Tehran."

Recent reports, however, say that none of the current group of 13 has actually been charged with the capital crime of moharebeh – fighting against God and the state.

U.S. Secretary of State Madeleine Albright has warned the outcome could have international repercussions. "The West can live with sentences that are in line with any evidence presented," said one foreign diplomat on hand to try to observe the trial. "If they get time-served, we could probably live with that. But if the accused are executed I would expect to see ambassadors recalled from Tehran."

Political pressure is being applied. For example, Iran has requested a sizeable loan from the World Bank, and the United States, Canada and some European countries are rallying opposition to a loan, or at least an indefinite postponement until the fate of the arrested Iranian Jews is determined.

Iran is still branded a sponsor of terrorism by the U.S. State Department, and Federal law requires the United States to oppose loans by international institutions to countries listed as sponsors of terrorism.

Western observers and human rights organizations question the fairness of the judicial process. The trial is held in Iranian Revolutionary Court, where there is no jury. A single judge leads the investigation, prosecutes, decides the verdict, and issues the sentence.

Menashe Amir, who directs Israel Radio's Persian-language service program, told AP it was clear that Tefilin was not speaking freely when he confessed on Iranian television. "This was not his real voice," Amir said. "He talked in a Muslim way, in a Tehrani way and it was not his real voice. I'm sure all he said was dictated and recited by him for the TV appearance."

In violation of international law, the accused were not given the chance to appoint counsels of their choice. Counsel for eight of the 13 defendants were named just days before the scheduled start of legal proceedings. Furthermore, for over 13 months, the prisoners have been deprived of contact with the outside world – except for 5-minute supervised visits with their families, once a week – behind a thick wall of glass.

Human rights watchgroups believe these conditions may have pressured the defendants into submitting to authorities and confessing.

These conditions may have pressured the defendants to submit to authorities and confess.

Iranian officials point out that eight Muslims have also been accused in this case. Critics point out, however, that the Muslims were arrested months after the issue of the Jews broke out, and now they are free on bail. In other words, the Muslims may have been "added to the case," to make it look like a national security matter having nothing to do with Jews.

Navid Balazadeh – arrested last year at age 16, but later freed on bail – denied he was involved in spying and said he was deeply committed to his homeland. "We all love our country. We belong to Iran just as Iran belongs to us," he said outside the courthouse before the trial. Balazadeh said he had been a member of the volunteer Islamic Basij militia while in school. "I am deeply linked to Iran this way."

In the wake of the highly-publicized televised confessions, a pall has been cast over the 6,000 Jews of Shiraz, the ancient capital of the Persian empire. This Jewish community which has lived in Iran for more than 2,000 years is now retreating into isolation, fearing that their countrymen will brand them as traitors.

The Jews of Shiraz control much of the city's business. But now, most of the Jewish shop owners on Shiraz's main Zand Avenue will not talk to reporters about the trial or give their names. Some Jews have even stopped going to work for fear of suspicion. Jewish leaders say the trial has started another exodus, mainly among the young.

What does this all mean for us?

"Redeeming of captives" is one of the highest mitzvot – so much so that we will even sell a Torah scroll to perform it. There is still time to act, since only at the end of all the trials will sentences be meted out. But short of flying over to Iran and performing a daring raid, what can we do to help?

There are two strategies to help save their lives:

From the political angle, an online petition demanding the release of the Jews was signed by 30,000 people, and was delivered to the Islamic Republic of Iran's permanent representative to the United Nations.

You can also write a letter calling on people to act, and distribute it at your local Jewish community center or synagogue.

Contact your representatives in U.S. Congress and ask them to vote to condemn this violation of human rights.

Furthermore, you can call and/or email your Congressman and express your concern. Tell them to support the House and Senate resolutions which condemn the arrests as a violation of human rights (S. Res. 116, S. Con. Res. 41, S. Con. Res. 39, and H. Con. Res. 128). To find out who your representatives are, go to: http://www.congress.org/search.html, and enter your full 9-digit zip code. This will produce a list of your representatives.

You can also send e-mail to:

Some experts say, however, that the more the captives are defended by the West and Israel, the more adamant Iranian authorities will be about pressing the case.

The case indeed leaves Iranian authorities in a political bind: Releasing the suspects would look like a concession to Western pressure, while conviction and execution would likely derail President Mohammad Khatami's detente policy.

Iranian Foreign Ministry Spokesman Hamid Reza Asefi said: "Such [western] statements will not help the accused in this case. As it has repeatedly been announced, this case of espionage is a wholly internal matter and any prejudgment and interference is rejected."

"We should let the issue solve itself quietly," said the wife of one of the men in jail. "That's the only way."

The Jewish community has had similar debates – of public protests versus private negotiations – during the Holocaust and also the during the Soviet Jewry Movement of the 1970’s.

What about the spiritual solution?

We can pray, learn Torah and do mitzvot on behalf of the captives.

How does this help the captives? By doing mitzvot, we elevate ourselves and get closer to God. And if we do so with the intention to help other Jews, then they – as the stimulus for this spiritual growth – accrue merits as well. It's a metaphysical win-win.

This is particularly effective when all the Jewish people are acting together for one unified cause. It is then that all the individual souls of the nation join together to form one perfect entity – making the potential spiritual elevation that much greater.

The rabbis have suggested to recite Psalms 130, 121, 20, 120 and 142, and the Achainu Kol Bait Yisrael prayer that is found in the Siddur after the Torah reading of Mondays and Thursdays.

Select one mitzvah which is difficult, and do it in the merit of the Iranian captives.

Besides prayer, you could select one mitzvah which is difficult for you to do, and undertake to perform it in the merit of the Iranian captives. Also, you could dedicate a session of Torah learning in their merit. You should say aloud that you are specifically doing the mitzvah for this purpose.

The names of the defendants are:

May we hear good news soon, and may the Almighty speedily and safely deliver all the captives.

West Side Story: 7 Jewish Facts
Scientific Curiosity and the Divine Encounter
Mind Over Milkshakes
Love the Convert
Comments
MOST POPULAR IN Israel
Our privacy policy
Aish.com Is Looking for Great Writers