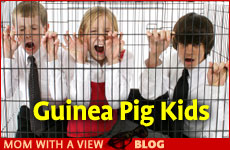 The gender-less baby: There’s a bit of Kathy Witterick and David Stocker in all of us.

By now, you’ve read the headlines: Parents keep child’s gender under wraps. You’ve had the typical sophisticated reaction: “These parents are nuts!” Or as Dennis Prager says, “You have to go to college to be so stupid.” And then you’ve either forgotten about the story (our lives are busy after all) or smugly reflected on the fact that you would never fall prey to such idiocy.

And you probably wouldn’t. Yet I think there is a lesson in this story for all of us. It’s not a cautionary tale because it hasn’t been played out to the end – although we can only imagine what that will be! But there actually is something important we can learn from the behavior of Ms. Witterick and Mr. Stocker.

Don’t make you children the tools to work out your issues – be they a psychological theory, a political theory, emotional pain, frustration, unfulfilled dreams, revenge or loneliness, to name a few possibilities.

The parents in this story didn’t make the decision quietly and privately. They sent out an announcement in all their friends. They wanted everyone to know about the grand choice they were making. Perhaps they were even anticipating their 15 minutes of fame. At their innocent infant’s expense…My heart breaks for any child who is the lab rat for his (or her!) parent’s experiment. But these parents aren’t the first.

My heart breaks for any child who is the lab rat for his (or her!) parent’s experiment.

Parents try out alternative schools, living arrangements (remember the children’s houses on the early kibbutzim?), unusual (to say the least) parenting techniques (how about Skinner’s box?), treating their children as guinea pigs. Do they really think deeply about the ultimate consequences?

But there’s more. I’ve seem far too many divorce cases where children are the pawns, the tools to exact revenge on the other side. The children’s minds are poisoned with vitriol about one parent, their relationship with them frequently destroyed. Parents lose sight of the fact that these are little souls they are responsible for and only see a way of causing further hurt to their former partner. Rare (and impressive) are the cases where parents speak only positively about their ex-spouse, whatever their real feelings, placing their concern for their children’s welfare ahead of their own pain.

Even in intact marriages, family therapists speak of triangulation, the phenomenon where one child is really the messenger between the parents and helps them avoid confronting each other and dealing with uncomfortable issues. No one thinks about the toll it takes on this child.

Or how about the all too common desire to have your child live the life you couldn’t, to experience vicariously what you missed out on in your own past? Is this really in your child’s best interests? Is this about their needs, goals or strengths? Do they want to go to Harvard, be a doctor or even a Torah scholar? Or is that actually your dream?

The list goes on and on. I know of more than one situation where men who didn’t marry until their late forties/early fifties were held back by one specific reason. Or should I say one particular person? Their mothers – who wanted their only sons constantly by their side, always at their beck and call. So no girl was every good enough and the grip was too strong.

And there’s more. I’m sure everyone has a “friend” who isn’t always supportive of their children, especially if their public behavior isn’t ideal. They allow themselves to be embarrassed by their children or to believe the critical words of an acquaintance or teacher over their own offspring. Their social acceptance takes precedence over their children’s emotional needs, over our responsibility to provide unconditional love.

Children are a precious and awesome responsibility. And our job is, to the best of our abilities (we are human after all), to do what what’s good for them, what allows their unique potential to be achieved and to shine.

It’s too easy to read about this Canadian couple and “tsk tsk” in smug disapproval. It’s more productive to be thoughtful and introspective. There’s a little of Kathy Witterick and David Stocker in all of us.

Are We Desensitized to Joy?

Hard To Say Goodbye
Vayelech 5783: Regret and Repent
Rabbi Sacks: Focus On the Important, Not the Urgent
Put Your Foot Down: Are Human Feet Poorly Designed?
Comments
MOST POPULAR IN Family
Our privacy policy
Aish.com Is Looking for Great Writers