Save the Yale Anti-Semitism Institute 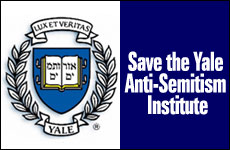 Is Yale caving into pressure from the Arab world?

Yale just killed the country’s best institute for the study of anti-Semitism. If Yale doesn’t want it, Washington should grab the institute before it goes anywhere else.

For the past five years, the Yale Initiative for the Interdisciplinary Study of Antisemitism has flourished in New Haven, Conn. On a small budget it has sponsored research, visiting fellowships, papers and presentations on the most abiding and lethal hatred mankind has ever known — the one that brought us the Holocaust and that is once again racing around the world.

A few institutes for the study of anti-Semitism have sprung up globally — a couple in Israel and some in Europe and North America. Yale’s is the first in the States and the first to be closed down.

This is, at first glance, strange. The quality and output of the Yale institute have been superb and wide-ranging. The institute has attracted scholars from around the world to study anti-Semitism and to present papers; has numerous governance committees, most of them composed of eminent Yale faculty; and has an international academic board of advisers — on which I serve — from other universities.

So why did Yale kill the institute?

The answer is simple. The institute held a three-day conference last August on “Global Antisemitism: A Crisis of Modernity.” More than a hundred invited scholars, almost all of them from universities and research institutes, delivered papers. Some spoke, inevitably, about the fastest-growing and most virulent manifestation of contemporary anti-Semitism — the anti-Semitism in the Arab/Muslim world, in which the tropes of classic European anti-Semitism (such as the allegations that Jews meet secretly to control the world, murder non-Jewish children to use their blood in Jewish rituals and spread disease to kill non-Jews) have been not only adopted but also embellished. Such eminent scholars as Bassam Tibi — a Syrian emigre, a distinguished professor at the University of Goettingen and a devout Muslim — spoke about anti-Semitism in that part of the world, as did other authorities. To be sure, some presenters expressed alarm and took an activist stance — as do some presenters at academic conferences on genocide, human rights, women’s studies, African American studies, Hispanic studies, gay and lesbian studies, and nuclear proliferation.

The conference provoked a firestorm. A Syrian American law student published a broadside in the Yale Daily News attacking the institute and the conference as fueling “anti-Arab bigotry and Islamophobia.” The Palestine Liberation Organization’s representative to the United States wrote to Yale’s president accusing the conference of demonizing Arabs — “who are Semites themselves” — and urging him to dissociate himself and Yale from the conference’s “extremism and hate-mongering.” The Internet lit up with attacks on the institute and Yale.

Yale administrators and faculty quickly turned on the institute. It was accused of being too critical of the Arab and Iranian anti-Semitism and of being racist and right-wing.

A requisite five-year review of the institute was held five months after the conference. Its director was told on June 1 that on July 31 the institute would be shut down and its staff fired. Yet the review committee’s report was kept secret and the explanation given was that the institute had not served “as a valued input to the research and teaching interests of some significant group of Yale faculty” and that “no core of faculty research or student interest has developed around the center or has emerged to direct its interests.”

The criticism was unfounded.  The institute’s faculty governance committee includes 13 Yale faculty members.  It has four faculty researchers; a faculty advisory committee consisting of 14 faculty members and two students; eight post-doctoral fellows; six graduate fellows; and 11 undergraduate interns.   It has launched the first international association for the study of anti-Semitism and has supervised undergraduate dissertations. Yale students have attended its seminars and courses.

Yale still could reverse course. It is a great university and capable of the greatness of admitting error. Actually, it doesn’t even have to admit error; it can save face by giving the institute time to correct any deficiencies it claims to have found.

But should Yale maintain its decision on closure, the institute should quickly be grabbed as a scholarly and policy gem by another university. A great university in Washington — George Washington, Georgetown, American, Maryland, Catholic — or other research institution, such as the U.S. Holocaust Memorial Museum, would be an outstanding venue where scholars and policy-oriented audiences could hear the products of its vital contemporary focus. This would be a superb outcome to Yale’s unwise decision — second only to leaving the institute where it is and making it a fixture in Yale’s academic firmament.

Walter Reich is the Yitzhak Rabin memorial professor of international affairs, ethics and human behavior at George Washington University and a member of the international academic board of advisers of the Yale Initiative for the Interdisciplinary Study of Anti-Semitism. He is also a lecturer in psychiatry at Yale and a former director of the U.S. Holocaust Memorial Museum.