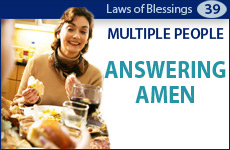 When another person says a bracha, we answer "amen" as a testament that the statement is true.

"Amen." So much is contained in this one small word. The root of the Hebrew word for "faith" (emunah) is the word amen. Saying "amen" declares our belief in God and His dependability.1

Amen is also an acronym for the words El Melech Ne'eman, which means "God, the Trustworthy King."2

Saying "amen" is not just a nice thing to do. Whenever you hear someone else saying a bracha, you should answer amen, having in mind to affirm that the words of the bracha are true.3 This brings with it boundless potential, as the Sages say: "The gates of Heaven are opened up for whoever answers 'amen' with all his might."4

In fact, the Talmud5 suggests that in one respect, answering "amen" is even greater than reciting the bracha itself. This is because one who confirms the bracha with "amen" serves as the second witness to the declaration of the one who said the bracha, and in a court of Jewish law, two witnesses validate a testimony.6 Another reason given is that the one answering "amen" – unlike the person saying the bracha and eating – receives no physical benefit from the bracha.7

When is "Amen" Said?

You should say "amen" only to a bracha which another person says, but not to your own bracha.8 As we said, "amen" is a testament that the statement is true, and it makes no sense to validate your own statement. However, there is a way to "join in" the "amen" that enhances your bracha: Have intent to be "included" in the "amen" that other people will say on your bracha!9

In addition to the food-related blessings, you should also say "amen": 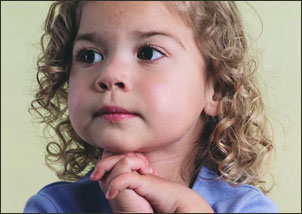 In order to say "amen," you should preferably hear at least God's name and the end of the blessing, or more minimally the end of blessing alone.13 However, even if you heard none of the bracha but know what bracha was said, you should still say "amen". For example, if you see someone holding a carrot and mouthing a bracha, you could answer "amen" even if you did not hear it.14 Even in such a case, you know what blessing you are attesting to.

Technically, whenever hearing another person's bracha, you should say the words Baruch Hu U'varuch Shemo ("Blessed be He, and blessed be His Name") after the words Baruch Ata Ad-onoy. These days, it is most commonly said in the synagogue, particularly when responding to the repetition of the Shemoneh Esrei. In any event, it should not be said by someone who is being yotzei with the blessing.15

When is "Amen" Not Said? 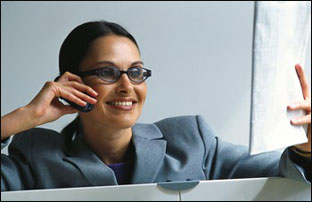 There is a beautiful statement of the Sages based on the gematria (numerical value) of the word "tzaddik" (righteous person).27 As shown here, a tzaddik should endeavor to answer amen 90 times during the course of a day.

Furthermore, in reading from right to left, we see that one should try to answer the Kedusha prayer 4 times each day, and Kaddish 10 times. The idea of saying 100 brachot each day will be the topic of class #43.