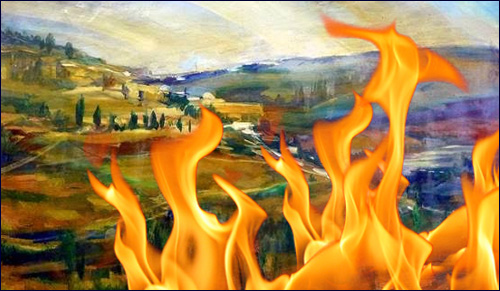 2000 original works of art by the incredibly talented painter went up in smoke.

Friday morning I was shocked to hear the news that the 3000 square foot art studio of Yoram Raanan, one of my favorite artists, was completely destroyed in fire that struck Beit Meir in the Jerusalem hills.

I spoke to Yoram, a gentle soul and incredibly talented artist, who lost close to 2000 original works of art in the fire.

“There’s nothing left. Forty years of work – paintings, all the photos and catalogues of my arts, equipment – my entire professional life is gone,” Yoram tells me with a calm, accepting voice. “It hurts, but I accept this. Thank God I can start over.”

Yoram and his wife Meira are grateful to be alive. Thank God there were no casualties in the fire that destroyed a few homes and empty chicken coops. 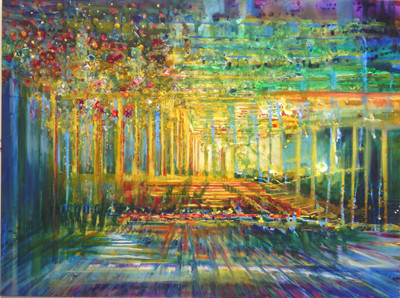 “It was Thursday night, 2 AM and I was working very late and was sleeping in the studio when my wife ran in and woke me up. ‘There’s a fire. We’ve got to go…”  I grabbed my wallet and car keys and started to drive out of the moshav. There wasn’t much time. There is only one entrance and the fire was raging on both sides of the road and the police would not let us out. It was too dangerous. We were told to go the back entrance, but it was locked.

“As we drove I saw my studio go starting to go up in flames. I knew that was it. It’s made out of wood and was filled with oil paints, turpentine, plenty of flammable materials.  There was a line of cars, all the residents trying to leave, but we were trapped by the fire for a good half hour. There were a few moments we thought that maybe this is going to be the end. Fire was everywhere.  Thank God the fire crew managed to contain the fire in the entrance to some extent and we were allowed to drive through the fire. Thank God we were fortunate to get out.” 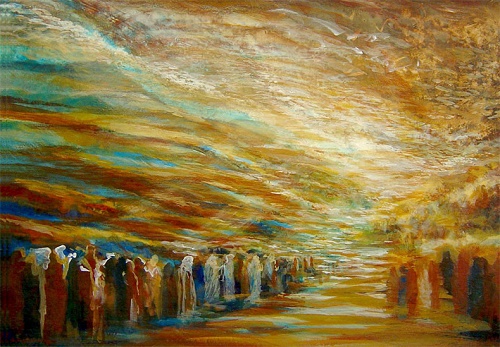 Yoram is a prolific artist who works 10 to 12 hours a day. One of his large paintings depicting the Children of Israel at Mount Sinai graces the main lobby of the Aish HaTorah World Center in the Jewish Quarter of the Old City. Many significant works of art were destroyed, including his project on art and the weekly Torah portion that consists of 150 original paintings that appeared in the Jerusalem Post.

“This a great loss for the history of art in general and of Jewish art in particular,” his wife Meira said. Yoram estimates that a few million dollars worth of art was destroyed.

“I can make new art, which is comforting, and go on. But I feel as if my history is gone.”

Yoram is blown away by the outpouring of support shown by Jews around the world. “Old acquaintances are writing me, and young people who have visited my studio of the years are emailing me, telling me how my work connected them to their Jewish heritage. We are in awe at the cohesiveness and unity of the Jewish people.”

Lucien Krieff, the owner of an art gallery and high-end Matsart auction house in Jerusalem and Tel Aviv contacted Yoram about doing an auction with the proceeds going towards rebuilding a new art studio. 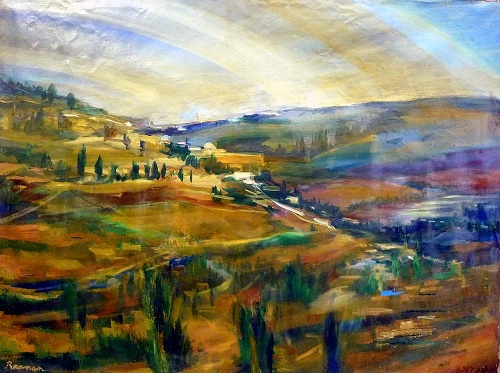 Yoram doesn’t yet know if and how much the government will help cover the damage. Much depends on determining the actual cause of the Beit Meir fire which may have been caused by arson or negligence due to police flares used in capturing thieves in the area.

In either case, Yoram is taking the loss in stride, eager to start over, and thankful that he and his family are alive.

Click here to help support the building of a new art studio for Yoram Raanan.

Israel: The Gateway of Hope

My Israeli Army Experience
What Makes Eli Run?
The Tyranny of Materialism
Science Enters the Mysterious Inner World of Consciousness
Comments
MOST POPULAR IN Israel
Our privacy policy