Why Kids Need to Fail 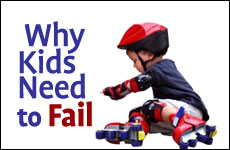 Today, it seems that anything short of unqualified success from our children is a source of quaking self-esteem, if not downright humiliation – theirs, and ours. We want them to avoid failure at all costs.

And they're not more successful because of it. Just pick up a paper and read how our children “rank” in school compared with those in other countries, have never been more involved in risky behavior, and are at times “diagnosed” and medicated at the first sign of stress.

Is the answer to let our children fail? Abdicate? Is the “antidote” to join the Tiger moms of the world, turning persistence at any price to punishment and humiliation we wouldn’t wish on our worst enemy to avoid humiliation?

As with all Jewish teachings, the answer lies in sense, balance, and a thorough understanding of what we’re truly trying to achieve. And that dicey goal is simple: character.

My husband, a chess player, insists on letting Jamie, our 11-year-old, win for fear of hurting his ego.

I work on all school projects with my kids. If they have a report due, I’ll suggest and correct to make sure they get A’s.

My five-year-old daughter, Rebecca, takes ballet. She has always enjoyed it until she wasn’t chosen lead dancer in their recital. Now she whines and complains of stomach aches so she doesn’t have to go. We‘re afraid if we push, we might traumatize her.

These parents are exceptional -- exceptionally concerned, and exceptionally involved. But, like too much of “a good thing,” if they continue protecting and fixing at all costs, these parents will likely need to be “involved” till their little ones are on Social Security.

1) My husband lets our son win at chess: Sonny, now 16, expects to be his school’s star chess player. The coach disagrees. He sulks, bemoans the injustice, and secretly worries that he might not be as smart as he thinks he is, while raging against a world that won’t do what he wants it to do.

2) ... it’s my job to make sure my kids get A’s. High school. A final history project is due. But the teens are busy texting and tweeting. If they flunk, they’re armed with a barrage of blame, none of which includes them. “It’s the teacher’s fault!” “It’s your fault!” they protest to mom. “You’re always hanging over me, criticizing!” or, “You should’ve gotten me a tutor, or bought a final report!”

3) ... but I don’t think we should push her. The little ballerina is about to enter Middle School. Or is she? “But I’ll be the youngest and no one will notice me!” she whines. “And if you send me I’ll throw up!”

So there we have it – the results of well-intentioned parents who fashioned their children’s life to be “failure-free.” They've created youngsters who:

And their parents have been duped by the modern myth that making life perennially rosy by providing a big fix is the road to self-esteem.

The road to genuine success and self esteem is not an easy one. It involves tests, and demands struggles. As it says in Proverbs, "The righteous falls seven times and stands up" (Proverbs, 24:16). There are going to be falls and failures, that is guaranteed. The critical test is who has the perseverance to get up. It is through the falling and standing ever stronger that allows us to learn the wrong paths, forge ahead with fewer mistakes, overcome obstacles and realize our great potential.

Children who see themselves as competent and worthy do so because they’ve learned how to live in a world that isn’t all smiles, easy shortcuts, and instant success, yet continue to love themselves and persevere despite their imperfections and shortcomings.

Failure can be one of our children's best teachers and a key strategy in fostering self esteem.

Too often we buy into other people’s notion of winning/losing, failure/success. Does “success” mean being chosen “The Batchelor?” Does “failure” mean we haven’t become a Silicon Valley millionaire? It’s up to each of us to dig deep and establish our own values. Do we live with a view that success is an external accomplishment or an internal victory related to character?

We don't know if our little Rebecca will ever become an Alicia Markova, but what is the priority: for Rebecca to be a prima ballerina now, at all costs, or for Rebecca to develop the character to persist at what she enjoys?

2. Failure as a Window to Reality

Failure gives children the true scoop on themselves and the world. Of course we hold their hand when they’re learning to cross the street. Of course we protect them from on-coming tractors and taking on speed bumps. But when we rush in to make success too easy, we lie to them and let them lie to themselves about who they are and what they need to work on. When we quit doing for them what they are perfectly capable of learning to do for themselves, they learn that instant success isn’t the goal. For Sonny who wants to be a good chess player, the true character lesson is in facing the challenge, trying, failing, learning what he needs to learn, and what he’s capable of accomplishing with effort.

Failure forces our children to face fear, obstacles, and challenges. “Poor you-ing” a frustrated child teaches blame, excuses, procrastination, then whining to guilt you and the world. Hear their concerns – without letting them avoid or manipulate. Your daughter, an A student, hates gym (didn’t we all?) “Why do I need basketball?” she moans, adding, “Please write me a note to get out of it…” Yes, trying is tough. It demands persistence, practice, sportsmanship. The character pay-off is a child who understands that life doesn’t always work as she wishes it to. It’s neither a tragedy nor a “life” failure. It’s a bump. One she can overcome or learn to manage with independent effort and resourcefulness.

4. Failure as a Path to Resilience

Failure teaches children they won’t break. Instead, they’ll learn to bend with the breaks and strengthen their internal metal. Failing is inevitable. By pointing out the value of bending with the breaks and teaching failure as opportunities, children hear: “I’ll not only survive, but I can use what I’ve learned and be better for it!”

Failure allows children to develop a Plan B; a better way. It encourages children to create new endings with new effort and persistence. Jason, age 16 wanted a part-time job. He scoured his local paper online, called, sent resumes, and nothing. Until Mom suggested they sit down and look for a better way. He paid a visit to all the neighbors, local shops, and e-mailed pals who had jobs. Boom. Two weeks later he was clacking copy on his computer for a neighbor. The ability to fail and re-group with new ideas teaches us those two terrific character-building words: “I can!”

How often have we not succeeded along one path, only to discover a new and better one along the way? Life is about adjusting and managing reality. Mistakes and mis-steps are not only remarkable learning experiences, but open up endless opportunities. Discovering what works for us and what doesn’t, teaches us who we are, where we “fit,” and what we find most gratifying, in the real world. Helping our children see failure, not as disasters, but as our best teachers, gives them permission to try and grow.

When we support effort over achievement, we reinforce the value of building character. Of course we’re thrilled when our Jake makes the team, our Emma brings home A’s, or our Aviva is accepted at Juilliard. But these are milestones usually accomplished after a host of “external” set-backs. More, each will bring their own set of new challenges. What will keep our children moving forward are the internal rewards they’ve reaped, not from winning, but from owning the character to “fail well.”