Why We Stayed on our Birthright 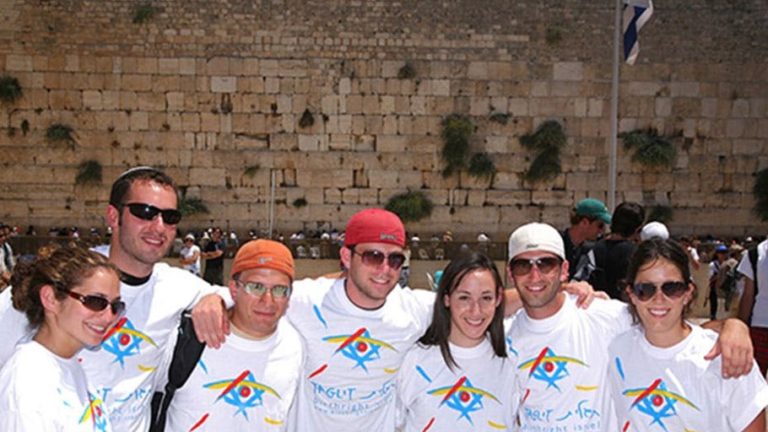 Instead of responsibly hearing from both sides, they chose to hear a one-sided narrative from the Palestinian perspective.

Standing on a stone floor just around the corner from an open balcony, first-time visitors to Jerusalem closed their eyes, entrusting their hand and safety to their friends. We rounded the corner and formed a small crowd at the edge of the balcony, opening our eyes to one of the holiest and most iconic views in Judaism: the Western Wall. With gasps, tears, hugs and quiet comradery, we began to take the time to truly appreciate the significance of where we stood. For many in this moment, we finally began to feel we were home.

That is all it was – just a moment – before it was shattered by a live-streamed, politically motivated, and carefully planned announcement by six members of our trip. They would be leaving the trip to visit with a Palestinian family. The activists said that their questions about the Israeli-Palestinian conflict were not answered during the first few days of the trip and they were appalled at the way Birthright had hidden the truth from them and presented a biased right-wing agenda. Yet, this is not an accurate portrayal of our trip. Their speech gave them the media attention they were seeking, but it was filled with misrepresentation and distortion. We, the remaining participants of Taglit Israel Outdoors Bus 428, are here to set the record straight.

Many of us, like the activists, had come to Israel intending to ask difficult questions as a meaningful part of our experience.

Throughout their abbreviated stay on the trip, these protesters used every opportunity to vocalize their viewpoints, using group discussions, evening relaxation time, bus rides and hiking rest stops to share their emotionally-charged rhetoric about the conflict with the group. At first, most of us were receptive to their questions as an important dialogue to include in a trip known to be heavily funded by right-wing American donors and the Israeli government. When one activist stressed the need to include conversations about the conflict in our trip, our group leaders generously allowed her to lead a dialogue on the evening of our first full day, during which we discussed and debated the topic for hours. From the first day, the trip schedule had been altered to make space for their ideas.

Many of us, like the activists, had come to Israel intending to ask difficult questions as a meaningful part of our experience. After the first night, one of us even volunteered to lead an effort to pen a group letter to Birthright expressing our disappointment at the lack of importance given to the Palestinian crisis on the trip. The rhetoric flowing from select group members, however, quickly became unreasonably aggressive and directed at our tour guide, who never avoided the topic, silenced their speech, or seemed to take offense at their disregard for his perspective. He answered each question calmly, patiently, and to the best of his ability, providing an extraordinarily neutral view of the conflict and acknowledging his bias as a former IDF soldier when necessary.

The activists didn't make any effort to connect with or ask questions of the seven Israelis who joined our trip.

When questions became incessant and repetitive, our guide repeatedly reminded the group that we had an upcoming geopolitical discussion with a professor of Middle Eastern history later in the week and that the professor would be better equipped to answer some of their specific questions. In fact, during that lecture, the professor answered questions in an open and honest way and encouraged us to do our own research and fact-checking on the information he presented us with. However, the activists did not stick around long enough to attend that discussion. Nor did they make any effort to connect with or ask questions of the seven Israelis who joined our trip, having lived in the midst of the conflict throughout their entire lives. The narrative being portrayed in the media and the carefully selected scenes from a particularly frustrating bus ride do not fully capture our group’s willingness, even eagerness, to discuss the conflict.

It became apparent only after the walkout that everything had been premeditated.

It became apparent only after the walkout that everything had been premeditated. Four of the six protesters had already been working prior to the trip with IfNotNow, an activist group with the goal of changing how Birthright presents the Israeli-Palestinian conflict. It did not matter that the reality of our group and our tour guide did not match with the experience that this organization led them to believe they would have with a staunchly pro-Israel and even Islamophobic guide. The efforts of our guide and our group leaders to create space for dialogue were not enough for them.

So, at our most vulnerable moment, they pulled out their cameras and turned us into a media spectacle for political gain. They filmed us without our consent and sent videos of our group to news outlets to be broadcast to the world. When our guide expressed that he understood their decision and asked for 10 minutes to follow procedure and contact Birthright’s office to prepare for their departure, they refused and stormed off. After their departure, they presented an incorrect narrative to the media, asserting that they could not grapple with the fact that Birthright refused to bring Palestinian perspectives to the table.

Yet, we all knew what we had signed up for; we saw the itinerary ahead of time and agreed to Birthright’s terms. Our tour guide said it best: Birthright is paid for by the Israeli government and that government is not going to allow an anti-Israel activist to speak to the group. We came on the trip with the knowledge that we would be seeing Israel as the Israeli government wants it to be seen.

Furthermore, we were brought to Israel to connect with our Jewish heritage and to bolster the Israeli economy, not to solve a major geopolitical conflict in 10 days. We were Israel’s guests and we were not “owed” anything on this all-expense-paid trip. It is not wrong to challenge the narrative you are presented with, to ask difficult questions, and to seek out multiple opinions. However, these activists took advantage of the trip and took spots away from others in order to stage a political stunt, and then pretended that the structure of the trip surprised them.

The activists had many options to see the other side of the conflict and to promote change. They could have, as our tour guide encouraged, extended their trip to visit the West Bank and hear from Palestinians. This would have allowed them to remain on the trip for its entire duration and calmly encourage further dialogue and education about the conflict within our group. They could have written a letter to Birthright, as our group had planned, to express their discomfort with the program’s omission of the Palestinian perspective. If they had not isolated themselves, they could have worked within the system to gain support and create a network of Birthright alumni who could push for future change to the trip’s itinerary.

We support the activists’ right to speak their beliefs, but we do not support the method by which they were expressed.

Instead, they left and took their viewpoint with them. They were not interested in seeing both sides of the conflict, as they claimed. They came on the trip with clear “right and wrong” sides in their heads and refused to hear anything that might contradict their ironclad opinions. Instead of responsibly hearing from both sides, they chose to hear a one-sided narrative from the Palestinian perspective.

Fostering discourse and political debate is a positive thing; many of us writing this letter have differing political opinions. Judaism has always included critical thinking and the importance of discussion in its teachings. One of the fundamentals of being a good Jew is to be inquisitive. We are taught to ask questions and to debate, but also to be open-minded. We support the activists’ right to speak their beliefs, but we do not support the method by which they were expressed. We wish they had chosen to stay on our trip and had continued the conversation that we began on our first night in a more productive and friendly way.

How to Leave Your Mark on the World

Behind Bars
Vayelech 5783: Regret and Repent
Rabbi Sacks: Focus On the Important, Not the Urgent
Put Your Foot Down: Are Human Feet Poorly Designed?
Comments
MOST POPULAR IN Israel
Our privacy policy
Aish.com Is Looking for Great Writers