What Are Blintzes and Why Are They Jewish? 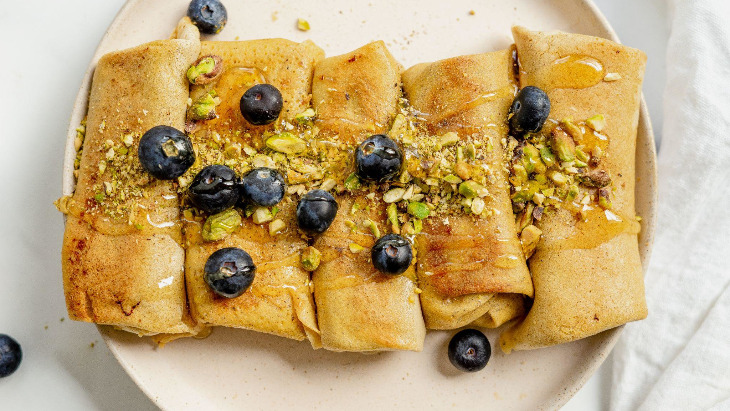 The history of blintzes and how to make them yourself.

In Judaism, food is an important part of our history and culture, and the route that it takes from the history books to our plate tells a story. Whether it’s a holiday or an event, there’s rarely an empty plate or stomach in sight.

If you’ve been to a Jewish-hosted bruncheon, luncheon, or New York deli, you’ve sampled delicious, mostly Ashkenazi food. Ashkenazi cuisine originated from the Jews of Eastern European countries and was brought with them when they immigrated to North America. Most delicatessens in North America feature these Jewish Eastern European delicacies because of the Ashkenazi Jews who craved a piece of home. Historically, Ashkenazi Jews were forbidden to harvest crops in their home countries, and thus the cuisine is traditionally void of vegetables and heavily reliant on meat, potatoes, and dairy.

There's no shortage of delicious foods to nosh on with dishes like slow-cooked brisket, potato latkes, stuffed cabbage, and dairy dishes like blintzes and kugels. Ashkenazi Jews from both Ukraine and Russia as well as Hungary have a strong preference for blintzes, although in Hungary they are called Palacsinta. Ukraine’s rich culinary history influenced what Ashkenazi Jews and gentiles view as “Jewish Food”. A notable component of Ukrainian dishes is that many of them are cooked twice, like the blintz!

Where do blintzes come from?

Blintzes, from the Yiddish word blintze and Russian pancake, blin. Blintzes are thought to have originated in Slavic countries (including Russia and Ukraine), adopting the name of blin… and the rest is history!

Blintzes are sweet crepes filled, folded, and rolled around a sweet and creamy filling, and fried until golden. Common in Ashkenazi cuisine, they are often served at brunch at dairy-based meals. Blintzes are common in Eastern Europe, especially in Ukraine and Russia. Blintzes are served for #brunchgoals, and during Shavuot, a holiday that celebrates all things dairy!

What is the difference between crepes and blintzes?

While both blintzes and crepes start with a thin, wheat-based pancake, blintzes are almost always filled with a blend of sweet cheese. Crepes, on the other hand, may be filled with a sweet or savory filling, and are often eaten plain, or with a light dusting of sugar. Not only do the fillings differentiate crepes and blintzes, but blintzes are cooked in butter until golden and crispy, and are cooked twice, whereas crepes are finished in the pan. There is another cousin of the blintz, a lesser-known cheese pancake called syrniki, made of farmer’s cheese, eggs, sugar, and often raisins, and shallow fried in oil or butter, similar to pancakes you know and love.

What can you fill blintzes with?

Traditionally, blintzes are filled with a sweet mixture of “farmer’s cheese”. Farmer’s cheese is a pressed cottage cheese that has lower moisture, and a firmer texture than the cottage cheese typically found in your supermarket. Difficult to find outside of Russia and Ukraine, drained, creamed, and packed cottage cheese and be substituted. If you’re looking for a shortcut, many supermarkets with dedicated kosher sections sell pre-made frozen blintzes but do yourself a favor and whip up your own, I promise they’ll be infinitely tastier, fresher, and totally customizable. In a pinch, pick up some premade crepes, and fill them with your favorite blintz filling and fry them up!

Can you prepare these in advance?

Making blintzes can feel labor intensive, from mixing, resting, cooking, filling, rolling, and cooking once more, but luckily blintzes are the perfect prep ahead dish! Pro tip: make extra crepes and freeze them for extra special breakfasts, any day of the week!

What makes these blintzes different?

Unlike the plain-vanilla or lemon flavored blintzes of kiddush past, these flavorful blintzes are packed with spicy cinnamon, cardamom and vibrant pistachios for a new take on an old classic. 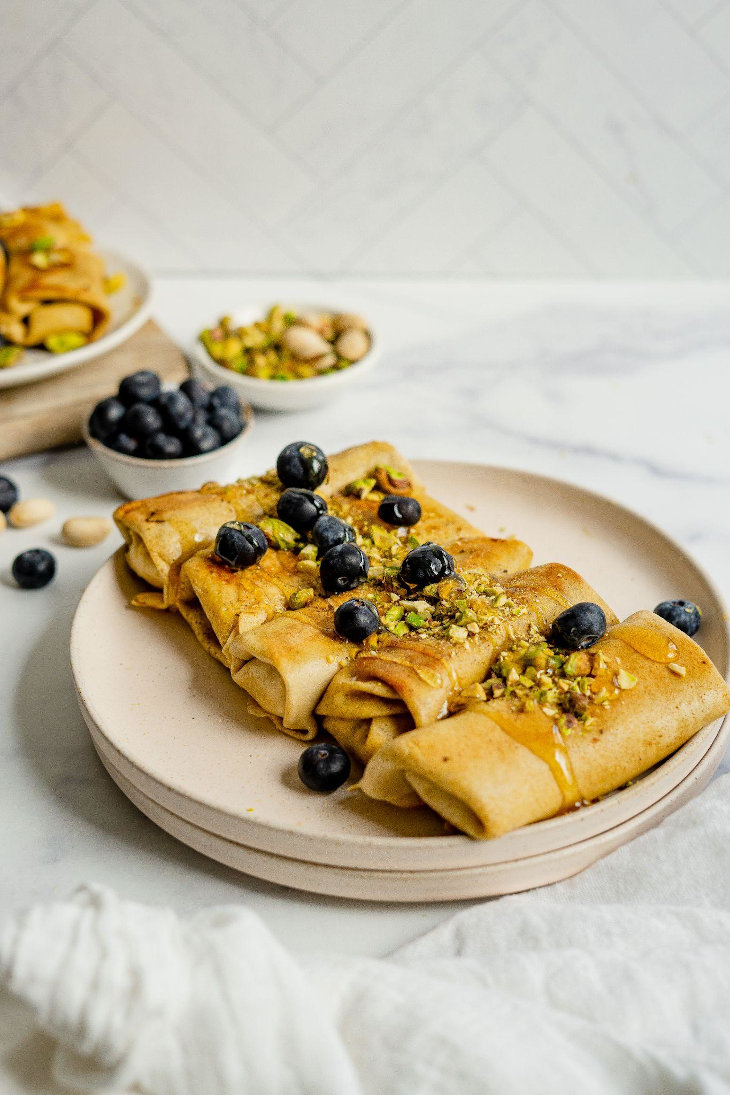 How to Make the Best and Easiest Charoset

A Very Persian Rosh Hashanah
For Every Individual, A Torah Scroll
Allegiance To The Monarch
Meet the Real You: Yom Kippur
Comments
MOST POPULAR IN Jewlish
Our privacy policy
Aish.com Is Looking for Great Writers