Was the Holocaust Only Against Jews? 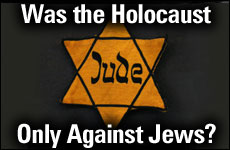 Is it accurate to refer to the Holocaust as a “War Against the Jews"?

In recent decades, attention has rightly been drawn to the large number of non-Jewish victims of Nazi Germany. Besides the estimated 6 million Jewish lives, between 5 and 12 million other people were killed prior to and during the war years. Wikipedia puts the statistics regarding the larger groups affected approximately as follows:

Nazi racial theory graded all non-Aryan populations as inferior beings – Slavs, Poles and Russians near the bottom, Scandinavians near the top, with the rest of Europeans falling somewhere in between.1 Gypsies, a landless, defenseless population, were relegated to a sub-human status similar to that of Jews. Mentally retarded and homosexual Germans were purged as defective individuals who damaged the purity and future of the superior Aryan race. Non-Jews died in the gas chambers, were tortured, starved and shot to death alongside their Jewish counterparts in vast numbers, and were clearly also targets of the satanic Nazi agenda.

This being so, is it accurate to refer to the Holocaust as a “War Against the Jews,” as it has been called, or do we not in fact need to develop a wider understanding of the events of those terrible years and their meaning for mankind?

Without detracting in any way from the gravity of the crimes perpetrated against all victims of Nazism, it seems that major distinctions exist between their Jewish and non-Jewish victims:

"The Blood Protection Law deals with the segregation of Jewish and German blood from the biological point of view… As an acute danger threatened the German people from Jewry alone, the law aims primarily at the prevention of further mixing of blood with the Jews."2

The government-sponsored pogroms in November 1938 did not include Polish nationals or businesses or Catholic churches. Mass Jewish emigration was Germany's goal at that point. The formulation of the "Final Solution" to the Jewish problem in January 1942 did not treat the Polish or Russian ethnic problem or outline worldwide extermination of homosexuals, but dealt exclusively with the anticipated extermination of the 11 million Jews of Europe. At no point did any plan for the total murder of any other population exist formally or informally other than of the Jews.

The 8 million Soviet deaths represented 15% of their population.

A far higher percentage of Jews were lost than that of their non-Jewish counterparts in all other groups. While 90% of Poland's Jewish population was decimated, 94% of Polish Christians survived. Close to 60% of Europe's total Jewish population was murdered, while the millions of Russians deaths represented 15% of their population. A large number of Poles and Russians were killed during the German Army's invasion and occupation of their lands, and many Russian soldiers died in captivity in violation of international conventions. It would seem inaccurate to classify these dead as Holocaust victims, although racism was undeniably a factor in the treatment they received.

These distinctions between Jewish and non-Jewish victims continued into the final months and days of the war. As the German Army retreated both on the Eastern and Western fronts, the effort to exterminate as many Jews as possible continued unabated. The ideal of reducing inferior Polish and Russian populations to make room for an expanded German Reich would not be realized, but the removal of as many Jews as possible from the world stage remained Germany's highest priority, to which resources continued to be directed even as the war was being lost. Nor were the Jews given a chance to reform or correct their ways. German homosexuals willing to accept therapy and rehabilitation would certainly have been spared, as would have the masses of Poles and Russians had they acquiesced to Aryan conquest of their lands.

No such option existed for the Jews.

At no point were the religious texts, objects, edifices or spiritual leaders of other populations targeted as were those of the Jews. The Nazi war against the Jews was both racial and spiritual. Their enmity to all that Judaism represented had its roots in history, in the ancient struggle to prevent the dissemination of Divinity in man's world. This unique aspect of Nazi Germany's war on the Jews was expressed eloquently in the Agudath Israel's underground newspaper in the Warsaw ghetto:

"Amalek (an Edomite people who attacked the Jews immediately upon their Exodus from Egypt) is concerned not so much with the Jews as with Judaism: the Jewish outlook, the Jewish worldview, the Jewish sense of honesty, the Jewish sense of justice, the Jewish attitude toward the indigent and the deprived… All of these are diametrically opposed to Amalekism… Amalek and Haman are targeting the Jews less as a people than as a Divine people."3

“Providence has ordained that I should be the greatest liberator of humanity. I am freeing man from the restraints of an intelligence that has taken charge, from the dirty and degrading self-mortifications of a false vision called conscience and morality, and from the demands of a freedom and personal independence which only a very few can bear.”4

The Holocaust was an unprecedented occurrence that combined a war on Judaism with a war on the Jews. The elements of the war against the Jewish spirit (e.g., abuse of rabbis, violence on Jewish holidays, desecration of synagogues and sacred objects, destruction of religious books) were not only a means of spiritual oppression. They were an end just as the killing was an end.

This unique aspect was rooted in anti-Semitic ideology and especially in Nazi beliefs. For the first time in history, biological race was linked with the human spirit, culture, and morality. The "Jewish germ" was not only the blood that had intermingled with that of the other nations, but the principles of morality, the spirit of liberalism, and the civilization that Judaism had introduced to Europe – everything that represented the antithesis of Nazism. Hitler, as the successor to the nineteenth-century anti-Semites, preached against Judaism no less than again the Jew.5

In light of these facts, re-framing the Holocaust as an outburst of racism or the effort of Fascism to eradicate human freedom is no less than a conscious distortion of history and a denial of the lessons that need to be learned. The genocide of innocent peoples deemed inferior or unproductive emanated from Nazi Germany's drive to exterminate the Jewish value system that teaches the inherent human rights of all people. The rule of brute force sought to drive the presence of Divinity from man's world, and the Jews, representatives of this reality, were the first and continuing targets of this eternal struggle.

Kristallnacht's Timeless Lesson
The Miami Boys Choir is Taking over TikTok
Caramelized Onion and Pumpkin Pirozhki
For Every Individual, A Torah Scroll
Comments
MOST POPULAR IN Holocaust Studies
Our privacy policy
Aish.com Is Looking for Great Writers