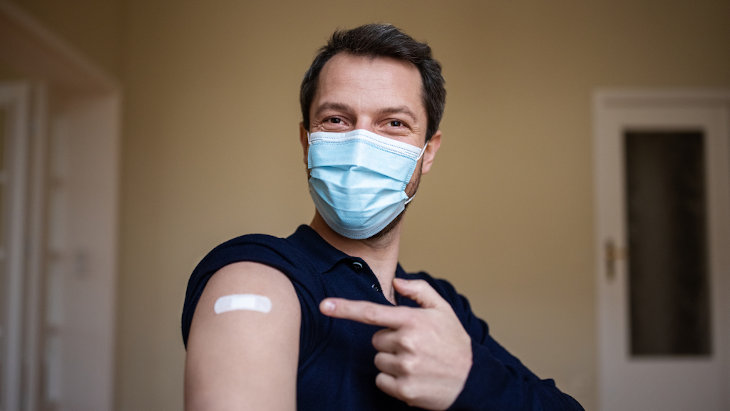 I thought I was free of that proverbial green-eyed monster, but then friends of ours got vaccinated before we did.

I thought I was free of that proverbial green-eyed monster. I understood that God runs that world, that everything is in His hands, that He doesn’t have a limited pie from which to distribute pieces, that He can and does give everyone exactly what they need. I’m not saying I was perfect, just that at least I seemed to have it under control.

Until this vaccine came along. And all of the sudden I discovered that I wasn’t as evolved as I thought I was! When two couples we are close to got the vaccine and my husband and I didn’t, I was frustrated, I was disappointed, I was, yes, jealous. And I marveled at my own weakness and the absurdity of it all! Jealous of another’s ability to get a vaccination? Who ever heard of such of thing? I was embarrassed and humiliated.

Yet I recently discovered I’m not alone. Apparently it is a very common phenomenon, so prevalent in fact that “vaccine envy” is now a hashtag on Twitter, a sure sign of popularity! That is small comfort in terms of my character development (!) but at least I recognize that it is a very real challenge. And why wouldn’t it be? The stakes here are a lot higher than the house, car, vacation or other things we are usually jealous of.

A recent WSJ article noted that it has even become an issue in marriages, where one spouse is vaccinated before the other. Mixed with the experience of pleasure for their now-immune partner is some very real envy and resentment. And, perhaps recognizing and understanding this, we can begin to move past it.

No one really wants their husband or wife to remain unvaccinated so they can share the misery or risk together. It’s just that in a weak moment, they feel frustrated and vulnerable and they revert to their baser selves. We all do…

While the stakes may indeed be higher, the philosophy and attitude remains the same.

God still runs the world, everything is still in His hands, He still gives us exactly what we need exactly when we need it. I accepted my place in line with equanimity (or so I thought) until my peers seem to get it before me.

But instead of resentment I should only be happy that they have this opportunity. And remind myself that I will get it exactly when the Almighty wants me to – not a minute before or less.

It’s always a mistake to get cocky, to think you have conquered the yetzer hara, your lower self, in any one area. It always comes back to bite you, and in this case, in a way totally unexpected! But I’m using the same tools to combat this jealousy as I would any other and, hopefully, I’m moving back on the right path, hashtag “vaccine envy” or not.

It’s Not Business as Usual