Tu Bishvat, Past and Present 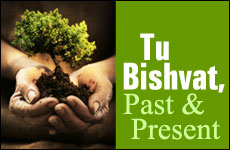 Discover the meaning of Tu B’Shvat, and play the online Solar Focus game.

In Mishnaic times Tu B’Shvat was only a tax date. A legal date regulating tithing and other agricultural obligations, such as Bikkurim (first fruits), Orlah, Maaser and Teruma, that needed to be separated before Jews could eat produce that grew in Israel. The tithed fruit was distributed and eaten by the poor, the Levites and the Priests. It was also brought to Jerusalem to be shared with the residents and visitors of the holy city. After the destruction of the First Temple in 586 B.C.E and the subsequent exile of most of the Jewish people from the land of Israel, tithing was no longer a biblical commandment. With the majority of Jews living in the Diaspora, where most Jewish agricultural laws are not applicable, Tu B’Shvat ceased being a day to be commemorated.

A Jewish community always existed in Israel, but it didn't play a significant role in Jewish world until the 1500's. Following the Spanish Inquisition, prominent Rabbis started to settle in Israel. Many of them were mystics who settled in the city of Tzfat. Together they brought a vibrant presence of Jewish life back to the country and established Tzfat as the mystical center of the Jewish world.

They began commemorating Tu B’Shvat by eating and blessing the fruits of Israel to express their devout appreciation for the land of Israel and to symbolize man's cyclical relationship with God and the natural world which He created. These Jewish mystics established the Tu B’Shvat Seder (which follows a set pattern similar to the Passover Seder) as a way to offer the fruit of our lips to God for all of the fruit bearing trees and the sustenance which He provides for us. The complete Tu B’Shvat Seder is practiced today by Hassidic courts and by many Jews throughout the world to affirm our connection to God and to show appreciation for His sustenance.

In the 1800's, Israel was barren desert whose forests and ecosystems were almost completely destroyed by invading armies and overgrazing by nomadic Arab shepherds. In the late 1800's began a new wave of Aliya to Israel from Eastern European countries whose goal was to rebuild the land of Israel. One of their national goals was to afforest the land as commanded in the Torah (Lev. 19:23). In the year 1890, Rabbi Zeev Yavetz took his students from the Orthodox agricultural settlement of Zichron Yaakov, to plant trees on Tu B’Shvat. This custom was adopted both by the Hebrew Teachers Union and by the Jewish National Fund. Today over a million Israelis take part in tree-planting activities organized every year on Tu Bishvat and today Israel is the only country in the world that is going into the 21st Century with a net gain of trees.

Israelis have continued to rebuild and maintain the land of Israel through clean tech innovations, afforestation and wildlife management projects. The knowledge they have acquired in the process has not only helped to restore and protect Israel's ecosystems it has also benefitted countless countries who have enjoyed the benefit of Israeli environmental knowledge. The Solar Focus game from our Eco Campus Virtual World of Jewish Israel Environmental Education which you can play below, is only one example of how an Israeli company used Solar Thermal Energy to produce the largest solar powered electricity plant in the Mojave Desert.

This Tu B’Shvat we can all join in appreciating the sustenance that we receive from God by blessing and partaking from the Seven Species with which the land of Israel was blessed.

There are seven different types of produce which are native to Israel. Each of these seven species is tasty and can teach us an important lesson in life.

2. Barley - Barley is similar to wheat but it can grow even in times of drought and in areas where wheat can’t grow. It represents our ability to continue to grow even in difficult times.

3. Grapes - The grape vineyard appears to be the weakest of trees. It doesn’t even have a tree trunk, yet its fruits are one of the tastiest. At times the people of Israel appear to be the weakest among the nations but their fruits can be the most pleasant.

4. Olives - The olive is a symbol of peace. The Jewish nation always needs to strive to make peace amongst itself and with the other nations.

5. Fig - “He who watches the fig will eat its fruit”. Figs ripen only one at a time. In order to harvest all of the fig tree’s fruit you need to constantly monitor it. Similarly one who is always diligent in their studies will ultimately succeed.

6. Pomegranate – From the outside of the pomegranate one can never tell if it is fresh or dried up. With many people by looking at their exterior you can’t tell much about them. They can look dry from the outside but be full of good deeds on the inside like the seeds of a pomegranate.

Rabbi Carmi Wisemon is the director of Sviva Israel and an Israeli high-tech professional.

Guardians of the Earth: A Tu B'Shvat Video

Apple to Apples: From Adam & Eve to Steve Jobs

Tu B'shvat: From One New Year to Another

It's Your World
Chukat 5782: Let’s Play the Blame Game!
The Sin of Moses: The Two Ways to Communicate
In Aftermath of Chicago’s July 4th Shooting, Local Moms Provide Countless Points of Light
Comments
MOST POPULAR IN Tu bShvat
Our privacy policy