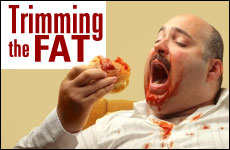 Passover is coming, so eat everything you can!

I know my articles don’t usually cover major news, but I’ve recently come across a press release so utterly shocking that I just have to share it. In fact, you might want to sit down for this.

Are you sitting? Good. Now hold onto something.

It turns out that, according to a study at the University of Ulster (in Ireland), published in a recent news release, scientists have now proven that – get this: Eating large portions of food makes you fat.

Whoa. Remember where you were sitting when you first read this.

I bet most of you are slapping your foreheads and going, “Oh my goodness! This changes everything! Why didn’t they figure this out sooner?”

Okay, so it’s not really shocking, especially to those of us who, when we sat down a couple of paragraphs earlier, made a loud exhaling noise and adjusted our pants. But what’s really shocking is that they’re only just now coming up with this study. Didn’t we already know this?

To understand how this all works, think of your body as a car. If you put in fuel, it goes. If you don’t put in fuel and try to go, it will start to shut down pretty quickly, and give you a “Low Fuel” warning light. An example of a low fuel warning light is when you go shopping on a fast day, when you have no strength to do so, and your body subconsciously puts one of everything in the entire store into your cart. But on the other hand, if you put fuel in the car three times a day and then don’t drive anywhere, there will eventually be no more room in the tank, and you’ll have to put some of that fuel in emergency storage cans in the back seat.

To conduct the study, the scientists kept a group of 43 people in controlled conditions for 4 days, and fed half of them large portions of food, and the other half standard-sized portions. By the end of the study, they found that the standard-portion group had eaten the large-portion group.

Not really. What they found was that everyone gained some weight, because they were all kept in a closed area where they could do nothing but eat, but the large-portion group had gained 1-2 pounds more than the standard-portion group. On the other hand, we can probably assume that the amount they ate more than the other group came out to more than two pounds, and the food was free. So it was definitely worth it. Also, this was Ireland, so I’m guessing there were a lot of potatoes involved.

Professor Barbara Livingstone, who ran the study, said that in the past few decades, there has been more and more overeating, due in part to inventions that allow us do less running around and burn less energy. And what do we do with the time that we save? We eat.

Another possible reason for overeating, Professor Livingstone said, was that, “Consumers tend to eat what they are served, even if it’s an inappropriate amount for their energy needs.”

Personally, I think this is the fault of the Jewish mothers. When you were a kid, your mother made you eat everything on your plate, right? Even though she was the one who put it there. And even though, as kids, our bodies were still in tune enough to tell us exactly how much we needed to eat, and as soon as we had enough energy, we ran into the living room to play. But then our mothers yelled at us to come back and finish what was on our plates. Why? So we could have more energy?

But then who ate the food that was left on our plates? Our parents. They originally took as much food as they needed to give them energy, and now they’re eating more than they need to. It’s a good thing you can’t gain weight from things you eat off someone else’s plate.

And how about eating things that you wouldn’t normally eat, just because you have to get rid of them for Passover? We never remember these things in the store. Shoprite had a “Can-Can Sale” in January, wherein they sold boxes of noodles (don’t ask me why) for fifty cents each. I piled my cart with them before I remembered that Passover is in March. So now I have a ton of noodles. I’m going to be so sick of noodles by the time Passover comes around, I’m not going to be able to look at them for a week. I’m eating noodles with cheese, noodle kugel, noodle soup, and even, in an effort to maybe lose some weight, noodle salad. Because apparently, noodles becomes a vegetable when you add mayonnaise.

It’s a good thing we have to run around cleaning.

Hey, why are you sitting down?

Jewish Sports Legends
Olivia Newton John’s Grandfather was a Nobel-Prize Winning Jewish Physicist
Don’t Believe in Other Gods Versus God is One
Seeing Without Eyes
Comments
MOST POPULAR IN Jewlarious
Our privacy policy
Aish.com Is Looking for Great Writers