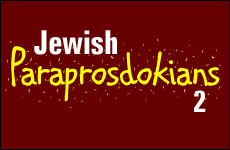 40 more paraprosdokians for the articulate Jew.

“Para – what?” Is this even a word? More, is it only pronounceable in Cyrillic?

While the word’s been around since the late 20th century, if you missed it in Grammar 101, we all did. A paraprosdokian is a figure of speech in which the first part of a phrase or sentence seems normal, even complimentary, while the second, or last part, does a 180 on the first.

Here’s an example from humor writer and friend Shmuel Breban:

“There’s a bunch of different crunches that affect the abs… my favorite is Nestle.”

The greats, from history to show business, have been using “paras” for years. Here are a few more corkers:

“A modest man … who has much to be modest about.” – Winston Churchill (of Clement Attlee)

"She looks as though she's been poured into her clothes … and forgot to say 'when'." —P. G. Wodehouse

And of course, Don Rickles has made a nice living “paraprosdokian-izing,” right you “hockey pucks?!”

But We Jews, with our gift for humor and ingenious curses that lull the victim into a false sense of security, then prophesize the hideous consequences (“You should have nine children – and not ONE will friend you on Facebook”) have been doing this for centuries.

In part one, I gave you 50. Here are 40 MORE Paraprosdokians for the Articulate Jew:

1- “You’re such an expert at catching more flies with honey than vinegar … but look around mamala, you’re surrounded by flies!”

3- “Is this a perfect match? Such a fastidious couple … he's fast and she’s tedious.”

4- “Ai! What a voice! I can only imagine how you’d sound without the adenoids.”

5- “Such luxurious lips! The last time I saw a mouth like yours ... there was a fish hook in it.”

6- “You deserve to be remembered … I’m naming my first ulcer after you.”

8- “A luscious spread you made … much better than your usual ‘mediocre.’”

9- “You’re so lucky you’ve got a brain … so you don’t need to worry about men noticing you for your looks.”

10- "Darling, I admire you giving your assets to your husband. But … if you give a loaded gun to a chimp and it shoots somebody, you don't blame the chimp."

11- “The food? Delicious! Only the portions are so small, the mice are hunchbacks."

13- “Thank God you found a bashert. I sent your photo to www. Lonely-hearts.com and they sent it back and said ‘we’re not that lonely!’”

14- “That toupee looks so real. Only maybe next time, you’ll buy one with a brain in it.”

16- “Darling, it’s better that most people take an instant dislike to you. It saves time.”

17- “Sweetheart, walk in front of me … better than behind my back.”

18- “Zelda, you look stunning! That dress didn’t fit you nearly as well at Tante Sheyna, or Cousin Chaya’s wedding!”

19- “Mamala, don’t lose hope. If they can make penicillin out of moldy bread, we can make something out of you.”

20- “Ok, Adele, so you made another mistake. Listen, you're only young once. But darling, trust me, it’s time for a new excuse.”

21- “That figure! That hair! You must be so confident in your inner beauty.”

23- “The décor in your new house? So creative what you can find at the Salvation Army.”

24- “I’m so proud you admitted that fault! Now you have one less to admit!”

25- “Of course you’re special! Sometimes I need what only you can provide … your absence.”

26- “You look lovely … but to tell the truth, you look better on your driver’s license.”

27- “Morton, it wasn’t your fault your father was a poor man. It was fate. But if your father-in-law is a poor man … you’re a shmegegge.”

28- “Finally, you’re old enough to know your way around … too bad with the arthritis and the catheter, you're not going anywhere.”

29- “Thank God you hear voices and see invisible people … at least they have better ideas than you do.”

30- “You did some job with those flowers! This is the first affair I’ve been to where no one’s on the floor fighting for the centerpiece.”

32- “Darling, you look … lovely. That’s such a flattering shade of nail polish!”

33- “Mamala, we took from our IRA to buy you Barbie and all her friends. So tell me, why is she more popular than you?”

35- “He comes from some yichus! If only there was a lifeguard in that gene pool.”

36- “I know your Myron has a photographic memory … but would it hurt if he put in a little film?”

37- “Those wine stains on the tablecloth prove your affair was a success – if this were an Italian wedding.” 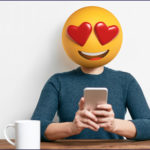 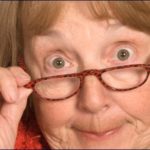 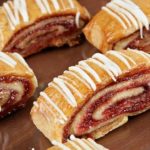 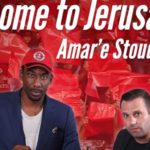 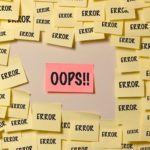 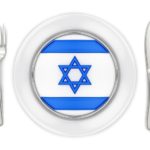 Jewish Ways to Lose Weight After the Holidays6 min read