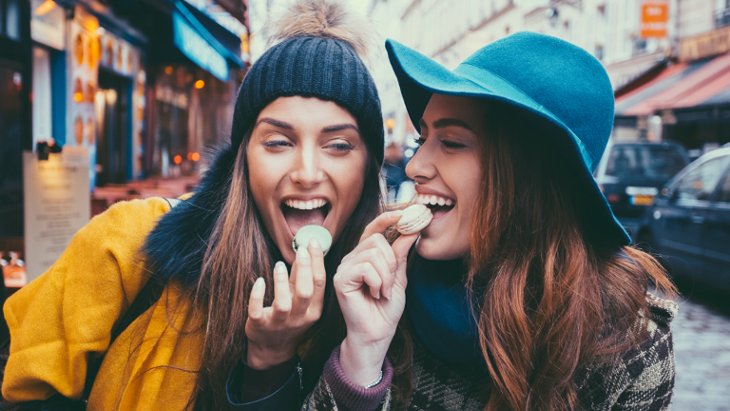 Unfortunately, there’s not much we Jews agree on. As the saying goes, two Jews, three opinions. But fortunately, there’s at least one exception: we like our food. Whether it’s kibbeh or kugel, Jews like to eat. Another thing we like to do is joke, so combine the two together and you must have a winning combination: Jewish jokes about food.

Moishe and Miriam were sitting down to eat at the dinner table. Miriam commented, "You know, Moishe, when we were first married, you took the small piece of brisket and gave me the larger. Now you take the large one and leave me the smaller. You don't love me anymore?"

It's lunchtime and 70 year old Moshe walks into Minky's Diner for his daily bowl of matzo ball soup. Moshe always goes to Minky's for his soup. He is also always punctual - so much so that the waiters always know he is coming in and always have his table and his soup ready for him.

As usual, Moshe sits down at his table and smiles at Steve, his regular waiter. Almost immediately, a bowl of soup is placed in front of Moshe. But this time, as Steve is walking away, Moshe quickly calls him back to his table.

"Why?" asks Steve. "What's the matter with the soup? It's the same soup as you always have."

"But there's nothing wrong with your soup. It's been made the same way we always make it," says Steve.

"For the third time, Steve, I ask you to please taste the soup," says Moshe.

"Alright then… if you insist," says Steve, looking around the table. "But where's the spoon?"

"Ah hah," shouts Moshe with a big smile on his face.

The afternoon was drawing to a close, and the guests were getting ready to leave.

"Mrs. Goldberg," said one of the ladies. "I just wanted to tell you that your cookies were so delicious I ate four of them."

"You ate five," responded Mrs. Goldberg. "But who's counting?"

Moshe was taking to his psychiatrist. "I had a weird dream recently," he says. "I saw my mother but then I noticed she had your face. I found this so worrying that I immediately awoke and couldn't get back to sleep. I just stayed there thinking about it until 7am. I got up, made myself a slice of toast and some coffee and came straight here. Can you please help me explain the meaning of my dream?"

The psychiatrist kept silent for some time, then said, "One slice of toast and coffee? Do you call that a breakfast?"

Dovid and Shlomo are older students at the Yeshiva and they decided that they were fed up with living in the dorms with the lousy Yeshiva food. So they decided to rent an apartment and cook food for themselves.

"Did you get us a cook book? Dovid asked.

"Why, are the recipes too hard?" asked Dovid.

Malka Feiglebaum went to Abe’s butcher shop every Thursday to pick up her brisket but was shocked one Thursday to find a foul mouthed parrot by the door who squawked: "Hey, lady, you're brisket tastes haluches." The woman tried to ignore the insult and hurried on her way.

The following Thursday when she exited the butcher shop, she quickened her stride in the hope that the parrot wouldn't spot her, but he did and squawked loudly: ""Hey, lady, you're brisket tastes haluches."

When the same thing happened for a third and fourth Thursday, she had reached the end of her tether. She stormed into the butcher shop and demanded to speak to the owner. She threatened to sue him and to have the parrot put down unless the abuse stopped.

The butcher promised faithfully that the bird wouldn't say it again.

The next Thursday, Mrs. Feiglebaum came to the butcher shop as usual, picked up her order and as she approached the exit, the parrot called out: "Hey, lady."

Mrs. Feiglebaum turned round and glared at the bird. "Yes?"

"You wanna borrow a brisket recipe?"

No Matzah for You!

It was Passover and two Jewish attorneys, Saul and David, who worked downtown met at a food court to have lunch. Saul and David proceeded to produce matzah sandwiches from their briefcases and began to eat.

One of the waiters in the food court marched over and told them, "You can't eat your own food in here!"

Saul and David looked at each other, shrugged their shoulders, and then exchanged matzah sandwiches.

Betty wakes up to a knock on her door. It’s 7am and it’s Mothers Day. Then Betty’s two teenage children, Suzy and Paul, walk into her room with smiles on their faces and say to her, "Happy Mothers Day, mum. Please don’t get up. As our treat to you, we want you to stay in bed and we’ll make breakfast."

Soon the smell of fried eggs and salami wafts up into her room and Betty is now really looking forward to her breakfast in bed. But after 15 minutes have gone by and there is still no breakfast, Betty gets up and goes downstairs to investigate. And there is Suzy and Paul sitting at the kitchen table finishing off their breakfast. And there’s nothing cooking. Betty looks at them both and says, "Nu? What’s with the breakfast?"

"We’ve already told you," replies Suzy. "It’s our surprise for Mothers Day. We decided to make our own breakfast this morning."

Having Her Cake and Eating it too

Little Moishe Rosenberg was so proud of himself for making a birthday cake for his mother. Chocolate cake being her weakness, Mrs. Rosenberg gulped down almost the entire thing. When she was finished, Little Moishie happily exclaimed, "I'm so glad you like the cake I made you, Mommy. I’m sorry, there should have been 32 candles on the cake, but they were all gone when I took it out of the oven."

A Jewish man took his Passover lunch to eat outside in the park. He sat down on a bench and began eating his matzah, complete with perforations and all.

A little while later a blind man came by and sat down next to him. Feeling neighborly, the Jewish man passed a sheet of matzah to the blind man.

The blind man handled the matzah for a few minutes, concentrating intently, and finally exclaimed, "Who wrote this? It's genius! "

David and Shirley Felder were in Israel to visit family and went out for breakfast to a restaurant where the special was two eggs, a bagel and a coffee for 6 shekels. "I’d like the breakfast special," Shirley said. "But I don't want the eggs."

"Then I'll have to charge you 8 shekel because you're ordering a la carte," the restauranteur warned.

"You mean I'd have to pay for not taking the eggs?" Shirley asked incredulously. "I'll take the special."

"How do you want your eggs?"

"Raw and in the shell," Shirley replied. “I’ll take them home with me.”

A Chanukah Miracle...in February
G-d Time
Shavuot is The Holiday of Cheesecake and Blintzes
What Does Kosher Mean Literally?
Comments
MOST POPULAR IN Funny Stuff
Our privacy policy