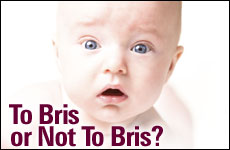 The last few months of my pregnancy, I spent more time agonizing about the bris than about labor itself.

From the outset, I knew I was carrying a boy. I can’t quite explain how, whether it was maternal instinct, woman’s intuition or just a wild guess. But when the sonogram confirmed this fact during my 20th week of pregnancy, I smiled one of those smiles that engulfs the entire face, a grin with its own zipcode, the look I’d later come to realize of a mother proven right.

My husband and I celebrated for the duration of the doctor’s visit, scrutinizing every millimeter of the grainy black and white photos they give you nowadays after a sonogram, searching for clues as to our unborn son’s athletic ability and intellect, his looks and charm, between the blurry pixels.

It was all very special and warm, charmed even. And it stayed that way for a good few hours, until I made my way back to the office (I’m a magazine editor) and shared the news with the first colleague I saw. “Are you guys going to do that circumcision thing?” she asked, eyes as wide as half dollars.

The question threw me, and I fumbled for words. Not because I wasn’t sure. I’d grown up Orthodox and married a secular Israeli. We are what I like to call "big picture Jews" – observant of what we consider the boldface, Jew-defining covenants. While we aren’t paragons of religious virtue, the bris was as much a foregone conclusion as, say, fasting on Yom Kippur.

Still, the tone of my coworker’s question unnerved me, as if between the lines there whispered some suggestion that my husband and I would be turning over our wrinkly little newborn to a feather-wearing shaman armed with a utility knife. I couldn’t tell if she thought the whole thing was kooky and cultish, but instantly I wished I’d just kept my mouth shut. Yet there it was, demanding an answer. “Yes, we’re doing that,” I told her through pursed lips. I was both embarrassed and defensive, and later, mostly worried. What if she expected an invitation?

For the remaining five months of my pregnancy I spent more time agonizing about the bris than about labor itself. I know that sounds horribly shallow, and to some extent it is. But the fact of the matter is that for a career minded, professional woman like myself, offices are cauldrons of judgment, where bosses and coworkers scrutinize everything from what you wear to what you order for lunch. (A burger and fries? Really?) Is it any wonder, then, that I was anxious about how they’d perceive my son’s bris, a party where the guest of honor, barely a week old, has his member sliced, only to be followed by a bagel-and-lox brunch? In political parlance, the optics aren’t very good.

There were other concerns, too. I knew of friends who had surgeons conduct their sons’ circumcisions in the privacy – and peroxide-scented sterility – of an operating room. They prized not just the cleanliness of the hospital, but also the peace of mind only possible, they said, with a board certified physician conducting the intimate procedure. For years I’d dismissed the concept of a hospital bris as a heresy on par with a pastrami-and-bacon on rye. But now that it was my own son whose pink little body would go under the knife, the idea didn’t seem so crazy.

I kicked around the notion in my head for a few days, visualizing myself watching the bris while wearing a blue hospital gown, a mask tied around my face. I imagined the surgeon clutching his scalpel, and my husband holding our baby aloft in his rubber gloved hands. But even in my imagination, where I could tinker with all the variables, the whole scenario seemed strangely devoid of Jewish character, as much an outpatient procedure as lancing a boil. It had no soul. And so I scrapped the idea.

I wanted a mohel who could bridge the different worlds and bring sanctity to the day.

I once had an editor, in a fit of frustration, tell me, “Dammit, you’re a demanding broad.” He’d have torn his hair out had he seen the list of criteria I devised for finding the right mohel. I needed someone who understood my particularly unique circumstances: an Orthodox extended family, a husband largely unfamiliar with a siddur, and a guest list that might include a number of people who’s sole point of reference for a bris was a Seinfeld episode; he also needed to be an expert, ideally trained at Harvard Medical School before having an epiphany about becoming a mohel (hey, a girl can dream).

I wanted a humane, capable mohel who could bridge the different worlds I inhabited and still bring a measure of grace and sanctity to the day. Needless to say, none of these qualifications came up in a Google search.

So I started asking around, soliciting recommendations. The hunt began to take on Goldilocks overtones – this mohel was too religious, that mohel wasn’t religious enough. Finally a journalist friend of mine referred me to Rabbi Moshe Chaim Friedman. “He’s the mohel to the media. We all use him,” she said with brisk efficiency, referring me his website, www.NYMohel.com. After some investigating, I learned that Rabbi Friedman has earned recommendations from the chairman of the Department of Surgery at NYU School of Medicine, in addition to Columbia’s Director of Minimally Invasive Urology. “Popular for his calming, upbeat presence,” wrote New York Magazine a couple years back on its short list of recommended mohels. Impressive, I thought.

In retrospect, I think there’s another reason that people in my business tend to gravitate to Rabbi Friedman. We are practiced skeptics, trained to snuff out phonies. And he just doesn’t trip the alarm bells in that way. My initial conversation with the rabbi was – how shall I say this so I don’t sound completely nuts? – lovely. Genuinely curious about my background, he peppered me with questions about my grandparents and my upbringing, and seemed utterly fascinated by my husband’s lineage – on one side, Bulgarian merchants, on the other, ninth generation sabras. Then he methodically reviewed his experience, his reverence and love for his job.

Maybe it was the pregnancy hormones, or maybe I just sensed that this rabbi understood me, but halfway through our call, I unloaded all my pent-up anxieties about the day, especially with regard to how it would look to my colleagues. I rambled, I whimpered, I probably even teared up. Rabbi Friedman listened intently, wordlessly, until I finished. “Mrs. Goldman,” he said gently. “Mrs. Goldman, I promise you, none of those things will matter.”

I wish I could recall exactly what he said to convince me, but most of my memories from those final weeks of pregnancy are washed out and hazy. All I remember was hanging up the phone and feeling relieved, like I’d finally set down the heavy load I’d been carrying for months. Really nothing else mattered much except being emotionally and spiritually available to my son. The rest was, as Rabbi Friedman might say, narishkeit.

My son’s bris was held on an unseasonably warm Sunday in April at the JCC in Manhattan. Rabbi Friedman arrived before we did. He was patient, even as several of my relatives trickled in late, putting a crimp in a day that would see him perform three back-to-back circumcisions. The ceremony was dignified and inclusive – Rabbi Friedman gave my guests (many of them colleagues and gentile friends) clear, engaging explanations for the various steps of a bris. He even calmed my father, who despite this being his sixth grandson, was himself a bundle of nerves as he held my baby on a silken white pillow. As Rabbi Friedman concluded, my husband looked up at me in awe and mouthed the words ‘thank you’.

“That was one of the most moving services I’ve ever attended,” said a non-Jewish friend.

Call me naïve, but I believe that many misgivings about the tradition (several, frankly, my own) were resolved that day. Afterwards, our loved ones surrounded us, some with red, damp eyes. “That was one of the most moving services I’ve ever attended,” said a non-Jewish news producer friend. (High praise coming from a man who covered the coronation of the Pope.) My colleague who months before asked about “that circumcision thing” grabbed my hands and squeezed them tight. “I feel so honored to have been part of this,” she told me, beaming.

Over brunch, my husband announced the name of our beautiful little boy – Oz Amichai, Hebrew for ‘the courage of my people lives.’ I surveyed the room, the rapt attention our guests gave him, a sea of smiles. A soft, inviting glow enveloped us all, and even afterwards it felt like nobody wanted to go.

Lea Goldman is the Deputy Editor of Marie Claire magazine.

The Jewish Perspective on Pregnancy Loss

Chuppah: Why the Tent?

It's a Boy!
Bechukotai 5782: Divine Retribution
Behar 5782: Working to Live or Living to Work?
The Wholeness of Being Broken
Comments
MOST POPULAR IN Lifecycle
Our privacy policy