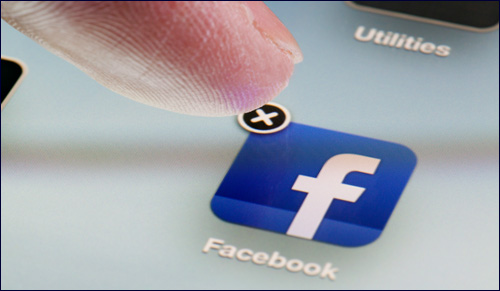 Breaking any habit is hard. But I’m learning to embrace the white space of life.

In my quest to live a deeper and richer life I decided to delete Facebook from my phone. Here are three lessons I’ve learned from the experience.

1. Know where the battle is

How does one remove Facebook from their phone? You can delete the app but that’s not foolproof. You can always sign on to it again through Google chrome. So I decided to have my husband change my password and the problem was solved.

Now you may call this being weak but I call it being smart. Why, you might ask, is this necessary? Do I not possess the self control and discipline necessary to simply not browse Facebook? Do I not trust myself?

Sometimes overcoming the challenge is not putting yourself in the challenging situation to begin with.

Many labor under the illusion that growth in life comes from placing oneself in the midst of challenge and temptation, confronting one’s worst demons, and emerging on the other side in victory. It’s true that growth comes from overcoming challenges but sometimes overcoming the challenge is not putting yourself in the challenging situation to begin with. Challenges will inevitably arise but we pray to God to not be put into situations of temptation.

The Talmud recounts a story of a man who was traveling and passed a river where women were bathing and averted his eyes so as to maintain modesty. Surprisingly, the Talmud also calls him wicked. Why? The explanation given is that there was another path to travel on where he could have avoided the site entirely, yet he chose to place himself in a difficult situation. He overcame the challenge but failed the test, for the true test was whether he would have the humility and the commitment to avoid the temptation in the first place.

Don’t buy the cookies if you don’t want to eat them. Know where the battle is.

When I first took Facebook off my phone I kept forgetting that I had done it and in opportune moments like nursing the baby or sitting in the car (not as the driver) I would whip out my phone, only to remember my resolution. In the beginning I would feel annoyed.

After a couple of weeks went by I started getting used to not having it as a go-to. I no longer felt that twitch to check what the rest of the world was doing.

3. Don’t be afraid of white space

When I was in high school I took a mandatory graphic design course. Being completely inartistic and more than a little bit technophobic there was only one lesson that I retained: don’t be afraid of white space. Don’t over-crowd a space with images and feel anxious by having lots of blank or “white” space. I’m sure it’s an important lesson in graphic design but I think it’s an even more profound lesson in life.

Not having Facebook so readily accessible means having a lot more white space in my life.

Too many people are afraid of the “white space” of life. Afraid of not having constant stimulation, afraid of being left alone with their inner world. Judaism has mandatory white space; it’s called Shabbat, and the mindful, internally focused energy that Shabbat brings into the week should motivate us to carve out that white space in our week as well.

Not having Facebook so readily accessible means having a lot more white space in my life. It means turning off the constant barrage of social interaction and interesting controversial discussions in favor of “empty” time, breathing time, thinking time. In a world of incessant noise and over-crowded images, embrace the white space.

I would love to hear what you’ve learned from your resolutions!

Chayi Hanfling lives in Los Angeles with her husband and four children. She has a Masters in social work and currently works for JAM, a campus outreach organization.

Princess Alice and the Jews