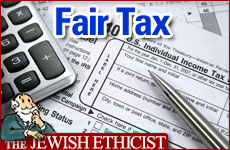 One principle of fair taxation is payment according to benefit.

Q. What are the Jewish principles of fair taxation?

A. In principle, Jewish law gives communities very wide latitude to decide on taxation systems. Jewish communities throughout the ages had a wide variety of taxation systems in terms of tax base (income, wealth, real estate, head tax), tax grades (progressive, proportional or regressive) and other parameters. There is certainly no one tax or tax system that is dictated by Jewish law, and for that reason Jewish law also acknowledges the validity of the secular tax system as long as it was instituted by a legitimate political process.

But flexible does not mean arbitrary. There are some basic principles of fairness against which taxes were always measured, and on occasion the rabbis struck down tax provisions because they were deemed inequitable.

In this column we will discuss one these principles; in forthcoming columns we will present others.

The Talmud establishes that the citizens of a city are authorized to impose a tax to build a wall for defense. The question arises how the tax burden is to be distributed.

The commentators explain that the context is a wall to protect against bandits. Since the bandits are interested only in stealing property, they were not usually a danger to life. So a per person tax would be inappropriate – not everyone benefits equally from the wall. The fair thing is to collect according to assets, meaning moveable property that is vulnerable to theft. The second half can be viewed as suggesting an additional basis for the tax, besides the one proportional to assets. Even this, states Rebbe Yochanan, should have some direct connection to the benefit; bandits are in a big hurry to avoid detection and disproportionately attack houses closer to the edge of town; thus, those closest to the perimeter benefit more and pay more.

By contrast, if the danger is also from war, where there is mortal danger, it is fair to add a head tax as well, since even someone without assets is willing to pay to protect his life.(2)

From these sources we learn that when a tax is designated for a specific project, a very important consideration in the financing is the extent of benefit from the project. We also learn that this principle doesn't contradict having the wealthy pay more than their share of the costs; very often, as in this case, the wealthy benefit more from public projects than the poor.

The Jewish Ethicist: Career Versus Careerism
Why My Iranian Mother Didn’t Want Me to Become a Religious Fanatic
The Jewish History of Prague
Why the Sexual Revolution was Bad for Women
Comments
MOST POPULAR IN Current Issues
Our privacy policy
Aish.com Is Looking for Great Writers