The Future of European Jewry 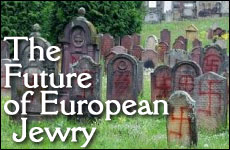 Those who deny Jews or Israel their freedom will lose, or fail to gain, their own.

For the Jews of Europe, these are the best of times and the worst of times. Take British Jewry as an example.

In the past 20 years we have built more Jewish day schools than ever before in our 355-year history. Culturally, a community deemed moribund a generation ago boasts a cultural center, a community center in the making, Jewish Book Weeks, arts, music and film festivals, and an adult-education event – Limmud – that has inspired offshoots in 50 other centers throughout the Jewish world.

Jews have achieved prominence in every field. Both parliamentary speakers, in the Commons and the Lords, are Jewish. We have had, in recent years, two Jewish lord chief justices, Jewish heads of Oxford and Cambridge, a Jewish editor of The Times and Jewish leaders of both the Conservative and Labour parties. Not only are Jews respected, but so is Judaism. The Jewish moral voice has become a significant part of the national conversation.

These are astonishing achievements. But they are clouded by the disturbing phenomenon of a new anti-Semitism spreading like a virus across Europe. This cries out for explanation. After all, after the Holocaust, if there was one thing on which people of goodwill throughout the world agreed, it was: Never again.

The entire post-war culture of the West – of the world – was tilted in that direction. Out of the determination that there should never be another Holocaust came the United Nations’ Declaration of Human Rights, the concept of a “crime against humanity,” the idea that racism is a vice, the movement for interfaith dialogue, and the historic shift in Christianity known as Vatican II, Nostra Aetate.

The new anti-Semitism is only secondarily aimed at Jews as individuals. Its real target is Jews as a nation – in Israel.

How, then, did anti-Semitism return to the very nations that pledged never to repeat it? The cynical answer is that it never died, it merely went underground. There is a shred of truth to this, but very small. As a line of reasoning, it is deeply misleading. For the new anti-Semitism is only secondarily aimed at Jews as individuals. Its real target is Jews as a nation – in Israel.

What has happened in our time is an extraordinarily subtle phenomenon that can only be understood by traveling back two centuries to the age of Enlightenment and the French Revolution. For centuries, Europe had been disfigured by crude, theologically driven Christian anti- Judaism. Jews were accused of poisoning wells, spreading the plague, desecrating the host and killing Christian children.

Jews were not the only victims of the Church; witches and heretics were burned as well. Then, following the Reformation, Christians started killing their fellow Christians in Europe’s great wars of religion.

That was when thoughtful people said, “Enough.” This led to the rise of science, the age of reason, the doctrine of toleration and eventually the emancipation of hitherto disenfranchised minorities, including the Jews. It was the most enlightened age in European history, and it was at this precise time, in Paris, Berlin and Vienna – the most sophisticated centers of all – that a new form of hate was born: racial anti-Semitism. As the deadliest virus the West has ever known, it led otherwise ordinary, decent human beings to do, or remain passive witnesses to, unspeakable acts.

It is not directed against individual Jews, but against Jews as a nation. It is not spread by conventional means, but by the new technologies of communication – websites, email, blogs and social networks – that are almost impossible to monitor and control.

Its most brilliant, even demonic, stroke has been to adopt as its most powerful weapons the very defenses created against the old anti-Semitism. It accuses Israel of the five cardinal post-Holocaust sins: racism, apartheid, crimes against humanity, ethnic cleansing and attempted genocide.

It is subtle, sophisticated and devastatingly effective.

It is designed to mislead, and it works. Israelis and American Jews see it as a threat to European Jewry, which it is, but only secondarily. The real target is Israel. It is an attack on Israel where it is most vulnerable, namely among the opinion-forming classes of Europe. If Israel is delegitimized in their eyes, that leaves only America, and the shrewd judgment of Israel’s enemies is that, when it comes to supporting Israel, in the long run America will not go it alone.

This is a chess game more long-term and coldly calculated than people realize. It aims at the destruction of the Jewish state. To counter it requires a coordinated global Jewish response beyond anything thus far envisaged. Nor is it a battle that can be fought by Jews alone. Without allies, Jews and Israel will lose.

This means reframing the argument. Anti-Semitism is always a symptom of something more pervasive, an unresolved tension within a culture that starts by targeting Jews but never stops with them. It was not Jews alone who died at the hands of medieval Christianity, Czarist Russia, Nazi Germany or Stalinist Russia: it was freedom itself.

The same will be true in the 21st century. Those who deny Jews or Israel their freedom will lose, or fail to gain, their own.

The writer has been the chief rabbi of the United Kingdom and Commonwealth since 1991, and a member of the House of Lords since 2009. He will discuss the future of European Jewry alongside a panel of experts later this month at the third Israeli Presidential Conference: “Facing Tomorrow 2011 in Jerusalem.”

Why I Left Germany

Something to Live -- and Die - For

The Bedouin Activist
Lessons from the Book of Jonah
Where Are We? The Body, Brain, Soul Problem
Dr. Sheila Nazarian’s Escape from Iran
Comments
MOST POPULAR IN Israel
Our privacy policy
Aish.com Is Looking for Great Writers