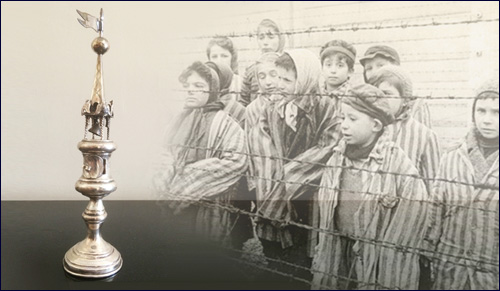 From war-torn Prague through Australia to Israel, a spice box spans five generations of one Jewish family.

Onkel Lipman was the only elderly man I knew. Nobody in Bratislava had uncles or aunts. Grandparents were only found in story books. There were no old people left in the Europe of 1945.

Somehow Onkel Lipman had survived the war. We loved and cherished Onkel Lipman. He was given the honor of saying Grace after Meals, and of leading the closing prayers on Yom Kippur. But what I remember most clearly was that Onkel Lipman always said the Havdala at the end of Shabbat. Every Saturday night the remnants of our family gathered in our home to hear Onkel Lipman bid the Shabbat farewell. There were so few of us left – my parents, four cousins, Onkel Lipman, his son Max and myself. My father's siblings, his nephews and nieces and his mother were no longer alive, they had all been murdered in Auschwitz. 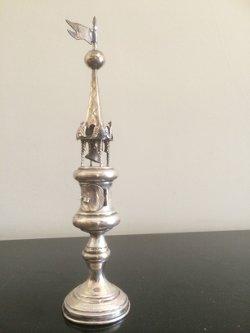 We waited patiently for Onkel Lipman to start. A cup was filled with wine till it overflowed, a Havdala candle was lit and a silver spice box was set on the table.

"Hinei El Yeshuati – behold God is my salvation," Onkel Lipman chanted. "Evtah velo acfhad – I shall trust and not fear," he continued.

"Pass the spice box around to everyone," my father said to me. I was five years old and felt very important to be responsible for handing around the spice box. Solemnly I went from one person to another. The square shaped silver spice box had a tiny door behind which the spices were kept. There was a thin spire with a pennant on top and a tiny bell underneath. Four small eagles perched on each corner of the silver container. I waited patiently for each person to say the blessing as they gently shook the spice holder to enhance the smell and then say the blessing.

Onkel Lipman won't be making Havdala for us anymore.

As the Russians tightened their hold on Czechoslovakia, the Jews felt less and less safe. One by one the cousins dispersed. Most of them went to Israel hoping to start a new life there. One Motzei Shabbat I was surprised that my father was saying Havdala. "Onkel Lipman won't be making Havdala for us anymore," my mother said. "He's gone to Eretz Yisrael with his son."

A few weeks later I overheard my mother saying to my father, "I want to get as far away from Europe as possible. There are too many terrible memories here." A short while later our family ended up in Australia.

I don't know how the spice box survived the war but when the custom officer asked my father what he was taking out of Prague, I remember my father pointing to the box, saying, "It's only a toy my daughter likes to play with."

In Australia the spice box came out every Motzei Shabbat. We often had visitors who stayed till after Havdala. "How beautiful that spice box is. How did you manage to save it?"

Onkel Lipman passed away a few years after coming to Israel. Every year Max and my father exchanged letters so we knew that he lived in Jerusalem, had a family and a number of children.

When I was in my twenties I moved to Israel and a year later married. The first time my father visited us he brought my husband a gift. "I would like you to have this now that you are starting your own home," my father said as he handed a carefully wrapped box to my husband. When my husband saw the beautiful spice box he was very moved. "I will treasure this and use it every week."

The years went by and our children grew up and married. One motzei Shabbat as our visit to our son was coming to a close I noticed the simple spice box he was using. When we came home I said to my husband, "It's time to pass on the spice box."

Now I watch my five-year-old granddaughter standing straight, her eyes shining, solemnly handing the silver spice box around the family. I remember myself at her age in far away Bratislava. I can hear Onkel Lipman's voice singing "Hinei El Yeshuati – God is my salvation" and I wonder now, in hindsight, how he had the depth of faith to say these words after all he had gone through.

As we listen to my son saying Havdala. I look at my granddaughter and smile. A fifth generation child of our family is holding the silver spice box in Israel.

Despite difficulties and dangers, we have survived.

Tova Teitelbaum is a child Holocaust survivor who grew up in Australia but has been living in Israel for many years. She is the author of a number of articles on Jewish themes as well as professional articles in her field of teaching children with dyslexia.

The Fountain of Youth

Out of the Mouth of Babes

How Many Rabbis Does It Take To Change a Light Bulb
Lessons from the Book of Jonah
Where Are We? The Body, Brain, Soul Problem
Dr. Sheila Nazarian’s Escape from Iran
Comments
MOST POPULAR IN Family
Our privacy policy
Aish.com Is Looking for Great Writers