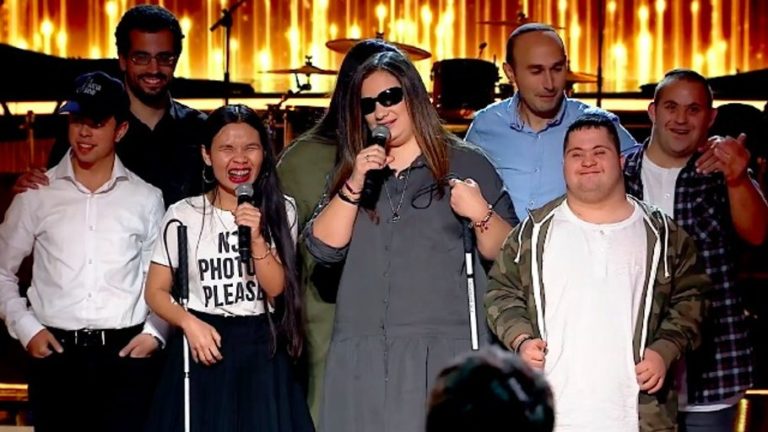 By refusing to break Shabbat and turning down a chance to represent Israel in the Eurovision, the popular band, whose members all have disabilities, has won the bigger competition.

It’s one of those ‘only in Israel’ stories: The Shalva Band, whose 8 members all have disabilities, has taken Israel’s top TV talent show ‘Kochav Haba,’ – Rising Star by storm with the winner going on to represent Israel in the Eurovision Song Contest – the world’s most watched live music event. Israel will host the international competition May 18 in Tel Aviv, after winning the contest last year.

The Shalva Band’s two lead singers are blind, the lead keyboard player is visually impaired, and of the bands four percussionists two have Down syndrome, one has a developmental disorder and another is a disabled war veteran. The pioneering Shalva center in Israel, where the band was born, provides services for thousands of children and young adults with disabilities. 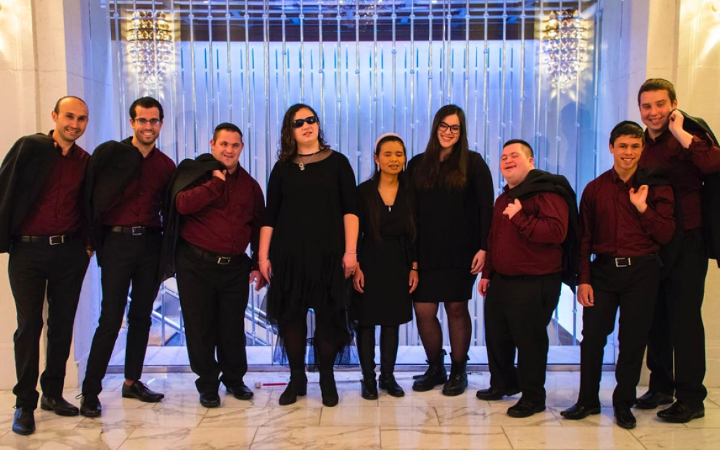 “It’s my favorite thing to do!” says Tal Kima, (20) who has Down syndrome and whose talent for the drums was discovered at the age of six during music therapy. “Music lights up my life,” says singer and percussionist Yosef Ovadia (18) who has a developmental disorder known as Williams Syndrome and began attending Shalva aged seven. “It's through music that I can be an equal.”

Despite their own doubts of competing, a string of stunning performances along with a powerful message of overcoming barriers has melted the hearts of judges and audiences, captivated TV and social media in Israel and made the band the favorite to win the event.

But with the final of the show just a week away and millions of Israelis rooting for them, the band which has three religious members announced it was pulling out of the competition since Eurovision rules require finalists to record a performance over Shabbat in case technical issues disrupt the final itself which is aired live on Saturday night.

In an interview with Israel’s Channel 12, with the band around him, disabled war veteran Shai Ben-Shushan who has directed the band for the past 13 years confirmed the decision to quit. “I want to say a huge thank you to all of the Jewish People for the huge embrace of support we received. The special thing about this band is that it shows that everything is possible. People don't look at their disabilities – they look at their professionalism and their abilities. However, we decided to leave the competition since there are principles in life that we believe in. Now, we are choosing to put Shabbat first.” 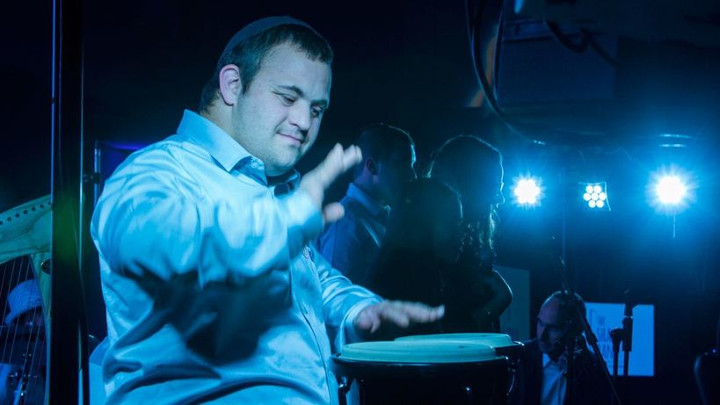 The band acknowledged they knew previously that the winning act would have to play on Shabbat, however they hadn’t considered it an issue as they never dreamed of progressing so far in the competition.

Ben-Shushan, a former elite army soldier who turned to music to help his own rehabilitation from a life threatening injury, acknowledged an idea had been floated for some members of the band to perform without their religious members, but it had been quickly rejected.

“We realized very quickly that if we split up we wouldn’t achieve anything,” he said. “What the Jewish People saw in us was the magic of us together, and if we don’t have that, it’s really not worth anything. There are Haredi, religious, traditional and secular Jews among us, we represent a cross section of the whole country and because of this, we wanted most of all to stay as one family.”

The interviewer, who was moved to tears herself, told the band, “Even now, in this painful moment leaving the competition, you are broadcasting an amazing message, of the values that you believe in.”

No one would play with him

In explaining the impact the band has made on public perceptions, Ben-Shushan quoted the mother of a child with Cerebral Palsy who had written to him sharing that for years, none of the other children in their neighborhood would play with her son. Since the show, other children had now begun inviting him to their home. “That is our victory,” Ben-Shushan told the band members sitting alongside him. “People who weren’t, are now walking with pride, because of you. It has given so much strength and inspiration to the Jewish People and the world over.”

One day everything just went dark

Born in Manipur, India, Dina Samteh one of the band’s two lead singers grew up in a home full of music – her mother was a professional guitarist who encouraged her to start singing around the same time her eyesight began to fade.

“I could see until I was six,” she said, “but then one say it started getting dark. When I told my mom I could no longer see she started crying, but I told her, ‘Don't worry mom, everything will be ok.’” 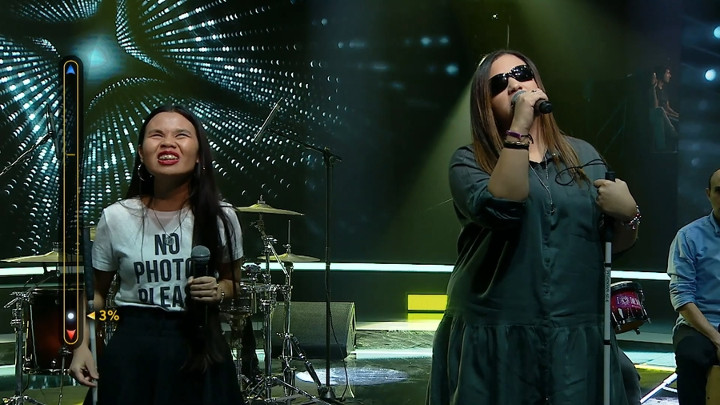 Dina moved to Israel in 2007 realizing a long-held dream of both her parents and her grandparents using her music to help her settle in, learning Hebrew through singing.

She joined Shalva seven years ago as a volunteer to help other children overcome disabilities. “I have found friends here in the band who give me strength and listen to me,“ she said. Joining the band has opened doors for her to travel and perform abroad. 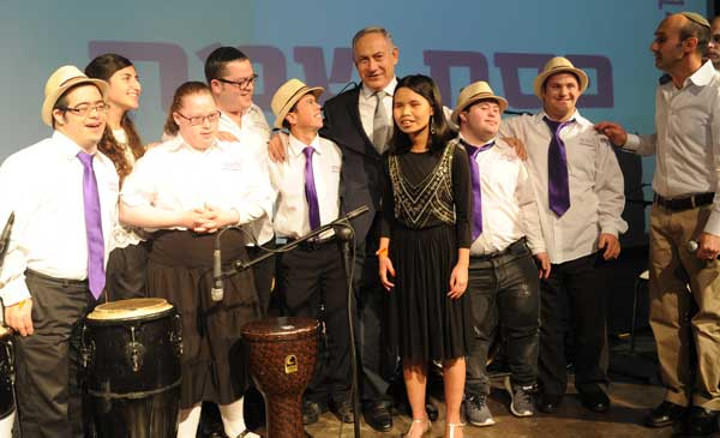 “I think I have found amazing things inside the darkness of my eyes,” she recently told an audience at the Google Headquarters in California, one of the prestigious locations the band has been invited to perform at in recent years. They have also performed in Mexico City, Toronto, London and Moscow in recent years and are booked solid for the near future. “We all have our difficult moments, but it's important to understand that there is much to be thankful for. I can’t see but I can hear. Thank you for healthy legs to go for beautiful walks, thank you for laughter, thank you for the ability to sing, thank you for the hard times because only through difficult moments I am able to appreciate all that I have.”

The Birth of Shalva: My mom forced me to visit Israel when I was 18

Shalva, which is a second home for the 8 band members, is the inspiring life works of Canadian Rabbi Kalman Samuels who grew up never expecting to even visit Israel let alone set up one of the world’s leading disability centers there.

“Until 18 years old I was a secular child,” he explains. “I was on my way to travel Europe after finishing high school and my mom said I had to visit Israel for two weeks on the way. I didn’t want to go,” he smiles. “But for reasons that until today I can’t explain, I kept putting my return off by another week. I wound up at a yeshiva. I became more and more interested. So I studied and became a rabbi, and married Malki.”

Shalva was born after Kalman and Malki’s first son Yossi at 11 months underwent a medical procedure which went wrong, leaving him blind and deaf. “If you ever decide to help my Yossi,” Malki Samuels prayed to God, “I will dedicate my life to helping other children.” 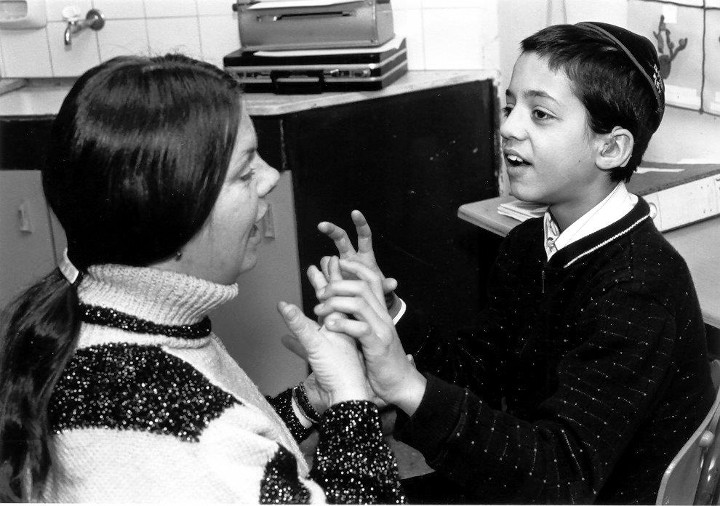 In 1998 Yossi made a sudden breakthrough as a speech therapist tapped over and over symbols to express the word table which he finally repeated, going on to learn symbols for all the characters of the alphabet. Samuels says, “It was Israel’s Helen Keller moment and shortly afterwards, Malki turned to me and said, ‘It’s payback time.’ Two years later, with the help of supporters in their hometown of Vancouver, Shalva was born and opened with facilities for five children which they welcomed irrespective of background. From these humble roots, Shalva has grown in ways they could have never have dreamed possible.

An offer we couldn’t refuse

Eleven years ago, Rabbi Samuels and his wife were offered seven acres in prime real estate in Jerusalem by the Israeli government to build a major national center for disability support. “At first I thought it was beyond our abilities,” Samuels said, “but I quickly realized you don’t turn down offers like that, and we went for it.”

The Shalva Center today is a state-of-the-art campus, with semi-Olympic therapeutic pool, an auditorium which seats 400 and a range of early childhood programming for ages 0-6, as well as an after school club for hundreds of children aged 6 and above and a day center for adults 21 through 40. There are also employment training facilities, independent living units and family respite care including for mothers who have just given birth. 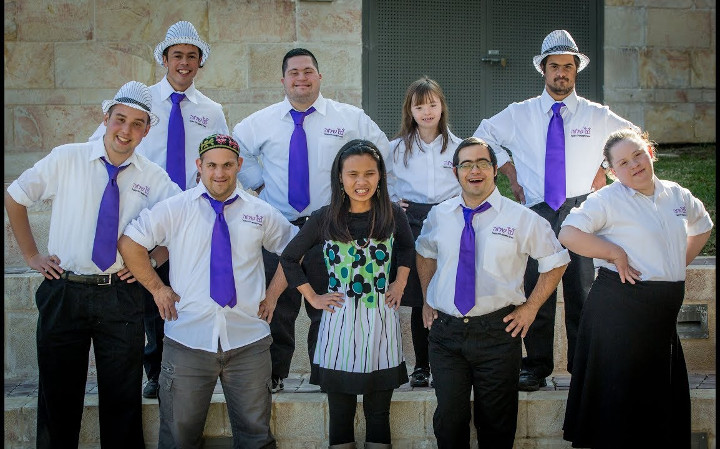 The world is familiar with Israel leading the way in the world of hi tech and startups, but the success of the Shalva Band is proudly focusing the world’s attention on one of Israel’s other great areas of pioneering development.

Authorities turned down Israel’s petitions to the Eurovision Song Contest to change or bend the rules to allow the Shalva Band to compete in May. But they have won the hearts of Israel and the more significant victory of sticking to their Jewish values and making a global Kiddush Hashem.

Their rise to stardom and their inspiring message of inclusivity and Jewish pride has already led to a string of new international bookings as well as invitation to headline Israel’s official 71st Independence Day celebrations later this year.

This Is How Your Marriage Ends
One Drink Too Many: My Journey of Breaking Free from Alcohol
The Scandalous History of the Aleppo Codex
Who was Two-Gun Cohen?
Why Really Everyone Believes in Free Will
Should Jews Support Ukraine?
Comments
MOST POPULAR IN Israel Diary
Our privacy policy