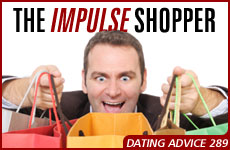 They have vastly different approaches to spending money. Can they coexist?

I met this great guy. He fits me perfectly and I see a fantastic future together. There are only a few problems that I'm not sure can be resolved. They have to do with money.

He spends money on unnecessary, expensive things that he doesn't need. For example, out of the blue he bought himself a really expensive telescopic lens for bird watching, even though he's never watched a bird in his life. Two weeks before, he bought himself a microscope because he got interested in that. I suggested that he try to borrow one first to try it out, but he insisted that he couldn't and needed the latest technology that just came out.

He also isn't earning much money. I'm worried that if we get married and have a family, he's going to be spending lots of money on all kinds of fancy new gadgets, instead of on his family and savings. When he was a child, his family went bankrupt, and I'm worried that that could happen to us. I am very good with saving and would have no problem being in charge of the finances, as long as he would let me.

I really like this guy. What should I do?

Thank you for sending with this question. We wish that more daters were courageous enough to confront their different attitudes about money while they are building a relationship. In fact, this is the optimal time for a man and woman to explore each other's views and expectations about many aspects of everyday life, to gauge their readiness to compromise on or accept the differences between them. Money is only one of the many important issues a dating couple should talk about.

Unfortunately, many people who decide to get married never address the topic of money while they are dating. They often assume that money is one of the many life issues that they can deal with as the need arises. They don't realize that sometimes two people's different approaches to money are so significant that it can destabilize the foundation of the relationship they want to build. That's why it's important for couples to clarify where they stand on basic money issues before they decide to become engaged.

Some money-related categories to discuss include:

It's unlikely that two people will see eye-to-eye on all these topics. Their initial goal is simply to understand each other and identify their similarities and differences. Hopefully, they will then be able to explore how to develop a shared vision of how to incorporate these differences into a mutually agreeable approach. This may seem technical and unromantic, but we believe it's a necessary step for two people who are contemplating marriage. If they can successfully compromise their differences, they'll have laid an important piece of the foundation in their relationship, and will have demonstrated their ability to solve problems as a couple. If they can't develop compatible financial goals and expectations, they are likely to find these differences as a constant source of strife and discontent.

You've indicated that you and the man you're dating have significantly different approaches toward allocating income and saving money. It sounds as if you try to follow a budget, give a lot of thought and planning to making major purchases, and believe it's important to live within one's means and avoid incurring unnecessary debt. The man you are dating wasn't raised that way and probably doesn't feel that way. He's an impulsive shopper, doesn't think of saving, and comes from a family that at one time incurred debt they couldn't pay.

Try adopting a bit of his "live for today" attitude.

Compromising your differences will require one or both of you to significantly change your mindset. That doesn't mean you should accept a lifestyle of accumulating debt, but it might mean adopting a bit of his "live for today" attitude by setting aside a portion of you respective incomes for that purpose and knowing that you'll sometimes go over that allotment. On the other hand, the man you're dating will have to decide if he wants to live a more financially responsible life, using a budget and a savings plan and learning to delay impulse purchases.

This will all require time and intense discussion, but if you address this topic before you get married, then you will definitely have a much smoother marriage. And beware: If you ignore your significantly different approaches to money, you will immediately encounter a big hurdle once you get engaged and begin to deal with the details of wedding plans and expenses. And that's no way to start a lifetime together!

One final thing: His impulse shopping may point to a more fundamental issue of not understanding the concept of delayed gratification. This is not necessarily the case, but it is prudent for you to be on the lookout for immaturity or impulsiveness that manifests itself in other ways, which could point to a deeper personality problem.