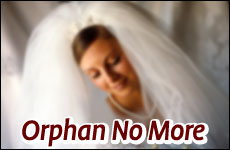 A young bride receives the gift of love and concern.

A few months ago, Sima, the cashier in our local grocery store got engaged. She is a quiet and shy young woman, so I wished her a hearty "Mazal Tov" and made a mental note to buy her a nice wedding gift.

Things would have ended with that if not for my son, Yosef, who enlightened me about Sima's situation. He had heard from other boys in our local park that Sima was an orphan who had emigrated from Russia at age 10. I looked at him skeptically. But Yosef patiently explained that Sima had no parents and lived in an orphanage a few blocks away. I was mystified. How could there be Jewish children in the 21st century living in orphanages?

The next morning I went to speak with the owner of the grocery store. He confirmed the story and filled in the details: Sima was a young child when her mother passed away. Her mother had entered a hospital and never came home. Her father never revealed to Sima about her mother's death, and for years she would ask where her mother was. After some time Sima's father remarried and she was left in utter confusion, believing that her mother was still alive. Her father was unwilling to deal with his daughter's emotional issues and placed her in an orphanage.

Sima remained there until a local rabbi became aware that a young Jewish child was languishing, abandoned by her father, and with no other relatives in all of Russia. The rabbi received permission to send Sima to Israel.

Sima was placed in Bat Zion, a high school in Jerusalem with dormitory facilities for Russian girls. It is not officially an orphanage, though most of the young women are missing one if not both parents.

After graduating high school, Sima stayed on in Bat Zion, as do some of the other girls who have nowhere else to go. The devoted staff made sure that Sima had proper counseling, and arranged to have her enter a trade school, so that she could become self-sufficient. Sima worked at our grocery store to earn money while she was in school.

And Sima's groom? He was also a young man who had emigrated from Russia -- with his widowed, elderly mother.

Armed with this new information, I decided to call the principal of Bat Zion, Mrs. Chaya Wagshal, to find out more about Sima and how I could help.

Mrs. Wagshal explained that since Sima's salary at the grocery store was insufficient to pay for the wedding, it would be held at Bat Zion and was being catered by an organization that provided the food at cost. Mrs. Wagshal was raising additional money to cover expenses like photographer and band (one piece, of course).

But what about all the expenses of setting up a home? I suggested that perhaps the women in my neighborhood could make a bridal shower for Sima. Mrs. Wagshal thought it was a fantastic idea -- after I explained the American concept of a "shower" and that Sima would stay dry throughout the event!

By the end of the first day, the entire list of items was covered. The outpouring of love and concern was overwhelming.

That day I walked through the rooms of my home, making a list of all the items Sima might need: linens, towels, two sets of dishes, cutlery, pots and pans, toaster, bathroom accessories, etc. With my neighbors' and daughters' help, we distributed 200 invitations to all the customers at the grocery store. By the end of the first day, so many people had called that the entire list of items was covered -- and people insisted on giving money to buy bigger items like furniture and major appliances. Those who could not attend the shower dropped off money or gift certificates at my home. The outpouring of love and concern was overwhelming.

I decided not to make it a "surprise" bridal shower, feeling it would be too overwhelming for Sima. So one quiet morning in the grocery store, I explained (in my broken Hebrew) that the women in the neighborhood wanted to make her a special party. I told her that in America every bride has a shower, regardless of financial situation. Sima was worried that she would have to open the gifts in front of everyone, as she did not want so much attention. I explained that there were many ways to run a bridal shower and opening the gifts in public was optional. Whatever she was comfortable with would be great with us.

On the appointed evening, I went to pick up Sima at the grocery store. Women had spent the afternoon decorating my home and making sure that everything was presented beautifully -- delicious cakes, salads and quiches.

When we entered the house, Sima looked stunned. There were close to 50 gift boxes piled in my dining room, and our neighbors took up the rest of any breathable space. Everyone showered Sima with blessings and good wishes. (Now I know why they call it a "shower.") She stared in amazement at the platters of food and was smiling from ear to ear. After some joyous singing and sumptuous eating, Sima politely asked to return to the grocery store.

Later that evening Sima came to my house to open the gifts. It was one of the most touching experiences of my life, and made a great impact on my children who shared the event. Sima carefully unwrapped each gift, folding the wrapping paper and slowly reading each card. She kept on repeating quietly that in her whole life she never received so many gifts.

Having been served dormitory food for over a decade, Sima was unfamiliar with some of the small kitchen appliances. She fiddled with the knobs of the toaster oven and wondered how she would learn to use all these gadgets. I kept going to the kitchen to wipe away my tears: tears of pain for this motherless young woman, and tears of joy in knowing that she had a fresh start to build a Jewish home.

After unwrapping all the presents, we packed up our car and helped bring it back to Sima's dorm, to be stored until her rented apartment was available.

As it turns out, this bridal shower created a domino effect. Other neighborhoods around Jerusalem have contacted Bat Zion, and we've had another dozen bridal showers since then. Word has spread beyond the borders of Israel as well, and donations for bridal showers have come in from abroad. And on visits to Israel, family and friends have brought household items in their luggage.

The Midrash describes the first act of kindness in human history as God preparing Eve for her marriage to Adam.

In one instance, Esther, a young woman at Bat Zion, had been raised by her elderly grandparents in Russia. The grandparents feared that when they'd die, there would be no one to take care of Esther. So with the help of a rabbi, they sent her to Israel, to Bat Zion.

Years later, Esther was ready to get married, and Mrs. Wagshal had difficulty arranging for wedding expenses. Desperate for a breakthrough, Mrs. Wagshal called the rabbi back in Russia and asked if he would go to the grave of a great tzaddik in the Ukraine and pray for Esther. At the grave, the rabbi met an American Jew who was standing there crying. The man explained: "A year ago my daughter died, and I am looking for a special merit for the elevation of her soul. I came to pray at the grave of this tzaddik who was my ancestor."

The man then looked at the rabbi and asked: "And why are you here?"

To make a long story short, the American man paid for Esther's entire wedding, plus the set-up of her new home. Esther has pledged to name her first baby after the man's daughter. He found the merit he'd been seeking.

The stories go on and on. One 12-year-old girl gave her Chanukah money so an engaged couple could buy a wedding ring. My old high school friends sponsored an entire shower as a merit for the recovery of the young daughter of one of our classmates.

The difference between these showers and the original one is that the bride does not attend. We found that the anonymity is very important to preserving the bride's dignity. So the women get together for a Torah class and light refreshments, and the gifts are delivered to the dorm, where the bride opens them in privacy with her friends.

No one can take away the devastation of a lost parent, but we can ensure that this most important event is celebrated with hope and dignity. As much as this is about pragmatics of setting up a house, it's also about lavishing the new bride with honor, attention, and outpouring of unconditional love. We take care that all the gifts are beautifully wrapped, to give the young brides the best feeling possible. And no gifts are second-hand -- it's all new from the box.

We are giving much more than the gifts. We are giving the confidence to start married life in the best way possible, and the feeling that the entire Jewish people are their extended family. And that's a gift which remains with the young couple for the rest of their lives.

I saw Sima a few weeks ago and she is doing great. She has an adorable baby boy, and looking at them together I realized: for an orphan, the idea of "family" skips one generation. But Sima has a new start, as the proud matriarch of a new family. For me it was a miracle, a tangible reminder of the impact we can truly have when helping others.

And it all started with my son Yosef. For him, out there riding his bike in the park, it was a small moment of sensitivity and concern. For Sima and others like her, it is transforming generations.

You can send your donation to Bat Zion bridal showers to:


For more information on sponsoring an upcoming bridal shower, or to visit Bat Zion on your next visit to Israel, contact Bruchie Coopersmith at bcoopersmith@aish.com

77 Years After the Holocaust, A Family Reunion
Why My Iranian Mother Didn’t Want Me to Become a Religious Fanatic
The Jewish History of Prague
Why the Sexual Revolution was Bad for Women
Comments
MOST POPULAR IN Israel
Our privacy policy
Aish.com Is Looking for Great Writers